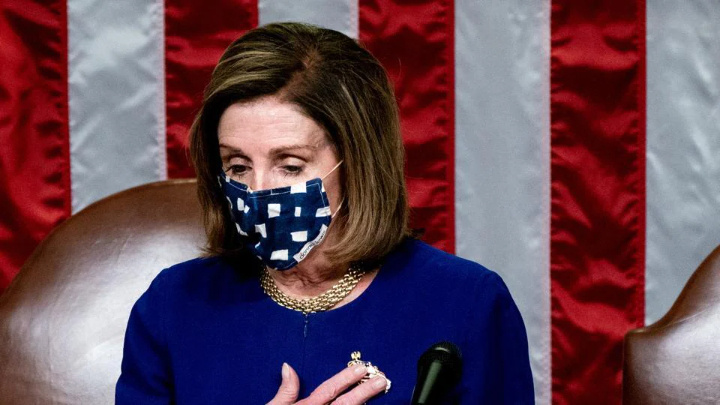 A United States congressional delegation led by Speaker of the House of Representatives Nancy Pelosi will visit Singapore from Monday to Tuesday (August 1-2).

The delegation will call on President Halimah Yacob and Prime Minister Lee Hsien Loong, and meet a number of Cabinet ministers, a spokesman for Singapore's Ministry of Foreign Affairs said on Sunday (July 31).

Pelosi's office announced on Sunday that she is leading a six-member congressional delegation to the Indo-Pacific region, including visits to Singapore, Malaysia, South Korea and Japan.

Pelosi said the visit seeks "to reaffirm America's strong and unshakeable commitment to our allies and friends in the region".

"In Singapore, Malaysia, South Korea and Japan, our delegation will hold high-level meetings to discuss how we can further advance our shared interests and values, including peace and security, economic growth and trade, the Covid-19 pandemic, the climate crisis, human rights and democratic governance," she added in a statement.

"Under the strong leadership of President (Joe) Biden, America is firmly committed to smart, strategic engagement in the region, understanding that a free and flourishing Indo-Pacific is crucial to prosperity in our nation and around the globe."

The visit to Singapore is the first by a congressional delegation in recent memory to be led by a House speaker, who ranks third in order of protocol after the US president and vice-president.

It follows several high-level meetings between leaders on both sides, including Vice-President Kamala Harris' official visit to Singapore in August last year and PM Lee's working visit to Washington in March this year - during which he met President Biden and Harris, and was hosted to lunch with US congressional leaders by Pelosi.

PM Lee was also in Washington in May this year for the Asean-US Special Summit, where he met Biden, Harris as well as Pelosi and other key members of Congress.

Pelosi said the group includes champions of a strong US-Asia Pacific partnership, adding: "We look forward to productive meetings that will continue to inform Congress' work to advance our values and interests and strengthen our partnerships in the region."

She did not mention Taiwan in the statement. Speculation over a possible visit to the island had raised temperatures between the US and China recently.