Tea, hot meals at Iraq parliament as protesters settle in 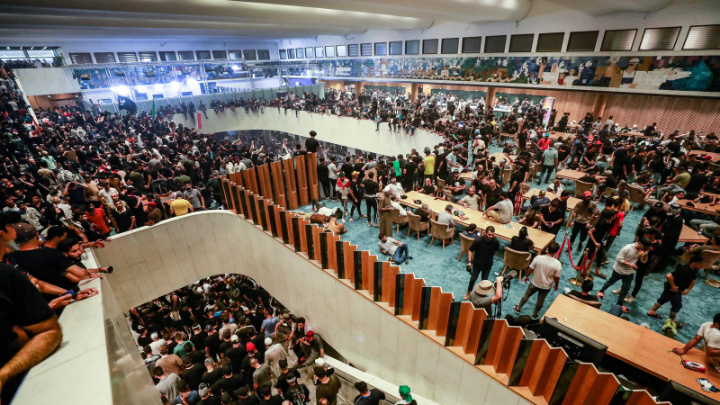 Volunteers shuttled back and forth in fleets of pickups to Iraq's normally secure Green Zone Saturday as protesters who occupied parliament earlier in the day settled in for the long haul.

The thousands of demonstrators who had overwhelmed the barriers protecting the compound camped out inside and outside parliament as supporters delivered hot meals and bottles of cold water.

One man lit a fire to warm some tea while another offered cigarettes for sale -- all as Iraqi security forces watched on, an AFP correspondent reported.

Inside the parliament building, some protesters sat at lawmakers' desks while others milled about, raising their mobile phones to film the occupation.

The devout recited religious chants marking the Muslim month of Muharram, which starts on Sunday and is a key period in the Shiite religious calendar.

In the gardens outside, protesters pitched a large camouflage tent by the entrance as women with children joined other supporters of mercurial Shiite cleric Moqtada Sadr in setting up camp.

Sadr, a former militia leader whose bloc emerged from October elections as the biggest parliamentary faction, has a devoted following among Iraq's Shiite-majority community.

"It's Moqtada Sadr who decides," said protester Umm Mahdi, cloaked from head to foot in a black robe.

"When he tells us to go home, we will leave," she said, surrounded by her four children, one of them a newborn baby, and three female cousins.

"Obeying the sayyed is the most important thing," she said, using an honorific reference to Sadr.

Zeinab Hussein said she had "left behind her home and her family" to join the sit-in.

Like many of the protesters, Hussein wanted an end to the corruption that she said has denied oil-rich Iraq even basic services.

"Why is there no (mains) electricity in Iraq?" she asked. "Where is all the oil money going?"

The immediate trigger for the Sadrists' storming of parliament was a rival Shiite bloc's nomination of a candidate for the premiership.

But resentment over corruption and poor public services is a grievance shared by almost all Iraqis.

"Nobody can obtain anything from the state or from a government ministry without having connections with a political party."

As a result of past deals, the Sadrists too have their representatives at the highest levels of government ministries, but in the eyes of the protesters, that does nothing to diminish the cleric's standing.

"He is the only person in Iraq who stands up for the poor," Haidar said.
Hindustan Times