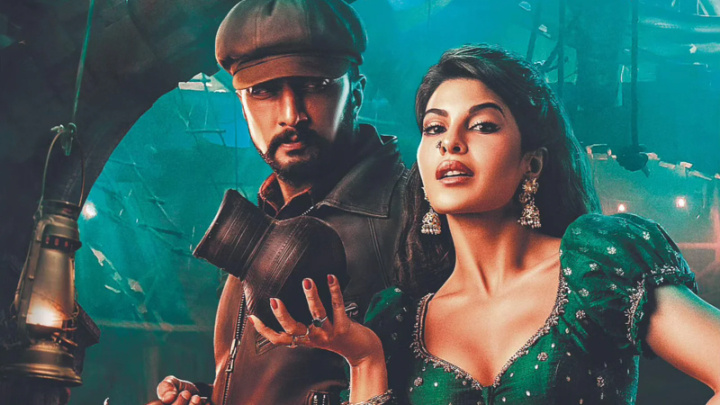 Sitting in a theatre, all dark, with 3D glasses on, and a film plays on the big screen mostly shot at night, at poorly-lit locations including forests and houses in a village — it was a quite a dark experience watching Vikrant Rona. Starring Kiccha Sudeep in the titular role, writer-director Anup Bhandari’s film is hot mess of genres that range from action, adventure and fantasy, and after watching it, you can add horror, dark comedy and domestic drama to the list. Yet, it barely does justice to any. Vikrant Rona is too many things blended into one and leaves you confused for most of its runtime. The Kannada film, that has been dubbed into Hindi, has too much going on at the same time and it doesn't really let you focus on any one character or incident for long.

Set in the fictional Kamarottu village (also the site of Bhandari's debut film RangiTaranga; 2015), Vikrant Rona begins as corpses of young children hanging from tree branches are found and an inspector's headless body is thrown into a well. There is a household, where all members have some back story to lead them into a new drama every single day.

Janardhan (Madhusudan Rao) is living with his wife who is battling cancer. Their estranged son Sanju (Nirup Bhandari) has suddenly returned from London after he left the house years ago but he's not allowed to enter the house. Janardhan's younger brother and his family have come from Mumbai to marry off daughter Panna (Neetha Ashok), who eventually falls for Sanju. And then enters Vikrant Rona (Sudeep), trying to reach to the bottom of these mysterious murders of the kids that are believed to have been killed by a demon. How Vikrant unfolds these mysteries, picking a series of unsolved clues left by his predecessor, and all this, while dealing with a personal loss.

The first half until the intermission keeps you invested and builds on the suspense about the motive behind these killings and the mystery of each character. But, the fall that both storyline and pace take post intermission disappointed me quite a bit. It just loses the plot and nothing kind of makes sense here onwards. Unnecessary subplots get introduced. Disjointed characters and stories take centerstage. All for no good.

At 147-minutes, Vikrant Rona appears way too rushed to justify its countless characters, and convoluted plot. The subtle comedy we were so far enjoying, suddenly shifts to gory horror, mostly with jump scares. Here, I'd like to mention about the screechy and overtly loud background score that does no good to the story.

The only thing (or two) that remain consistent in Vikrant Rona is the visual appeal and Sudeep's unmatched swag. The cinematography department does a good job in capturing the landscapes and the CGI doesn't look exaggerated. And as for the hero of the film, the swag he carries and the charm he creates leave a strong stamp. His mannerisms, antics, action and even the emotional scenes serve a full package. Sudeep's scenes with his daughter Geetanjali Rona are cute and at the same time add a different dimension to the otherwise bland narrative. Sadly, all this is let down by a poorly written and ineffectively executed script. Even if Bhandari's direction tried to salvage the film from doom, the story just doesn't allow that to happen.

Nirup Bhandari is quite a surprise and impresses with his balanced performance in some scenes. Neetha Ashok has a pivotal role but somehow doesn't have a well-defined character arc and gets to do limited work on screen. Then, there's Jacqueline Fernandez as dancer Racquel D'Coasta, who has hots for Vikrant, but is nothing beyond a cameo, not adding much to the story.

It won't be wrong to call Vikrant Rona an ambitious film but at most places, you feel the team just got too overambitious and, in a bid to achieve and show too much to the audience, it ends up a confusing tale without any focus. Watch it to enjoy Sudeep's superstar persona and making some action scenes look spectacular.