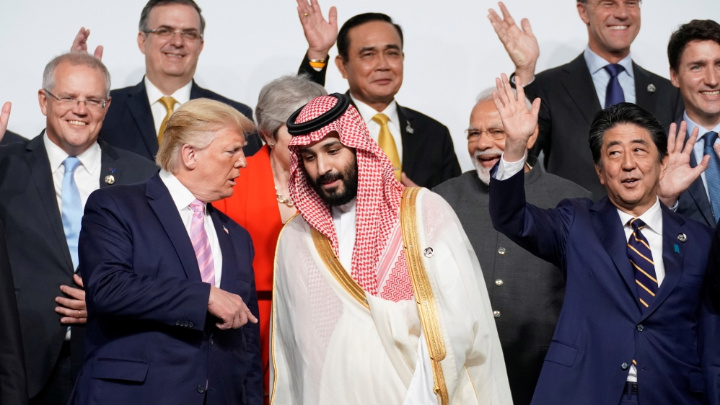 The meeting will be seen as the latest step in the readmission of the de-facto ruler of the kingdom into the international fold, after US President Joe Biden met the man universally known as MBS earlier this month.

The topics set to loom over the meeting include energy supply as concern grows over possible power shortages due to the Russian invasion of Ukraine, as well as reining in the nuclear programme of Riyadh's top regional foe Iran.

MBS -- who is portrayed at home as a champion of social and economic reform but seen by critics as a murderous tyrant -- arrives in France fresh from a trip to Greece to discuss energy ties.

"I feel profoundly troubled by the visit, because of what it means for our world and what is means for Jamal (Khashoggi) and people like him," Amnesty International secretary general Agnes Callamard told AFP, describing MBS as a man who "does not tolerate any dissent".

The visits mark MBS' first trip to the EU since the murder of Khashoggi by Saudi agents at the kingdom's consulate in Istanbul in 2018, a crime that a UN probe described as an "extrajudicial killing for which Saudi Arabia is responsible".

It also said there was "credible evidence" warranting further investigation of the individual liability of high-level Saudi officials, including MBS.

US intelligence agencies determined that MBS had "approved" the operation that led to Khashoggi's death, though Riyadh denies this, blaming rogue operatives.

The killing drew outrage not just over the elimination of a prominent critic of the Saudi regime, but also for the manner in which it was carried out. Khashoggi was lured into the Saudi consulate on October 2, 2018, strangled and dismembered, reportedly with a bonesaw.

"The visit by MBS to France and Joe Biden to Saudi Arabia do not change the fact that MBS is anything other than a killer," said Callamard, who at the time of the killing was the UN special rapporteur on extrajudicial killings and led the independent probe.

His reception by world leaders is "all the more shocking given many of them at the time expressed disgust (over the killing) and a commitment not to bring MBS back into the international community", she added, denouncing the "double standard".

But despite the concern over Saudi Arabia's rights record, the kingdom is seen by many in the West as an essential partner due to its energy resources, purchases of weaponry and staunch opposition to Iran's theocratic regime.

Russia's invasion of Ukraine has made the the oil and gas reserves of the kingdom all the more important for the West.

Callamard expressed concern that "values were being obliterated in the face of concern about the rising price of oil".

The French president had already travelled to the kingdom in December 2021 for talks with MBS, a visit that raised some eyebrows at the time.

MBS is in charge of the country's day-to-day business due to the ailing condition of his father, King Salman.

Macron will also be arriving from a three-nation tour of Africa, where he visited Cameroon, Benin and Guinea Bissau, none of which are seen as exemplary democracies.

After the recent fist-bump greeting from Biden that for many symbolised the West's re-acceptance of MBS, there will be huge interest in the body language between Macron and the Saudi.

The talks are set to get under way late in the day, at 4:30 pm (1830 GMT), and include a working dinner at the Elysee Palace. MBS reportedly arrived late Wednesday at a Paris airport and headed to a private residence outside the city.

"The war in Ukraine has put the energy-producing countries back in the spotlight, and they are taking advantage of it," said Camille Lons, research associate at the International Institute for Strategic Studies (IISS).

"This gives them political leverage that they will use to reassert their importance on the international stage," she added.