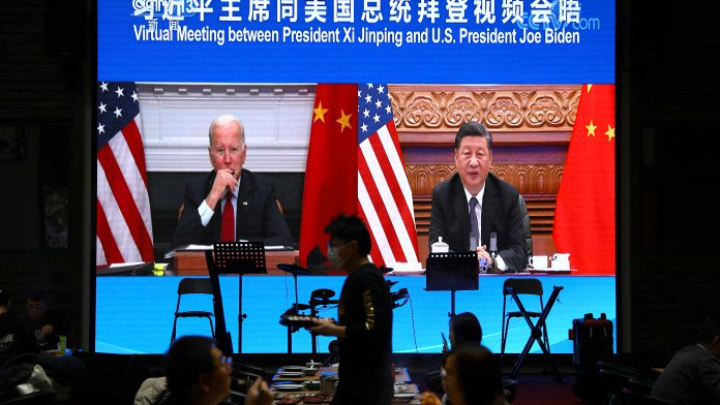 Presidents Joe Biden and Xi Jinping will speak Thursday, according to a U.S. official, their first conversation in four months coming amid new tension between Washington and Beijing over China's claims on Taiwan.

The planned talks between the two leaders — the fifth in a series of regular check-ins — have been in the works for weeks. But the possibility of a visit to Taiwan by House Speaker Nancy Pelosi, the top congressional Democrat and second in line of succession to the presidency, has added fresh strain to the complicated relationship.

Beijing is warning that it will take “forceful measures” should Pelosi visit the self-ruled island of Taiwan that China claims as part of its territory.

The U.S. official declined to be identified ahead of the public announcement. The schedule was first reported by Bloomberg.

Pelosi hasn't confirmed plans to visit Taiwan, but Biden last week told reporters that U.S. military officials believed it was “not a good idea” for the speaker to visit the island at the moment. Biden's comments came after the Financial Times reported last week that Pelosi planned to visit Taiwan in August, a trip she had originally planned to make in April but postponed after she tested positive for COVID-19.

The speaker has declined to comment on whether she plans to visit Taiwan, citing security protocol on her travel. But she said Biden's comment stemmed from military brass being "afraid our plane would get shot down, or something like that, by the Chinese.” She would be the highest-ranking U.S. elected official to visit Taiwan since Republican Newt Gingrich visited the island in 1997 when he served as House speaker.

“It’s important for us to show support for Taiwan,” Pelosi said. “None of us have ever said we’re for independence when it comes to Taiwan. That’s up to Taiwan to decide.”

Administration officials have privately stressed to Pelosi that traveling to Taiwan could further complicate a delicate status quo.

Chinese officials aren’t mincing words, sending a message that a visit by Pelosi would be viewed as a change in U.S. policy and treated as a provocation.

“If the U.S. insists on going its own way, China will take forceful measures to resolutely respond and counter it, and we will do what we say,” said Chinese Foreign Ministry spokesperson Wang Wenbin.

The U.S. has a longstanding commitment to the “One China” policy that recognizes Beijing as the government of China but allows informal relations and defense ties with Taipei. China has stepped up its military provocations against Taiwan in recent years, and there are fears that it’s trying to intimidate the island into accepting Beijing’s demands to unify with the communist mainland.

The talks between Biden and Xi could also include discussion of North Korea’s nuclear program, differences between Beijing and Washington over Russia’s war in Ukraine, efforts by the Biden administration to revive the Iran nuclear deal and the status of the U.S. administration’s review of tough tariffs imposed on China by the Trump administration.

“There are issues of tension in this relationship,” John Kirby, a national security spokesperson for the White House, said Tuesday. “But there’s also issues where we believe cooperation is not only possible, but mandatory, for instance on climate change, which affects us greatly.”

Long-simmering differences over Taiwan have come into intense focus in the aftermath of Russia’s invasion and ongoing efforts to annex swaths of eastern Ukraine.

As the U.S. scrambled to assemble a global coalition to hit the Russian economy with heavy sanctions following Vladimir Putin’s ordered invasion of Ukraine, Biden warned allies — particularly those in the Indo-Pacific — that Beijing would be watching closely how democracies responded as it considers its next steps on Taiwan.

White House national security adviser Jake Sullivan said Friday he fears that Beijing might be gleaning some “concerning” takeaways from the five-month-old war in eastern Europe. But he suggested the moment has also led to careful reflection in Taipei.

Taiwan was a central topic during Biden and Xi’s last call in March, about three weeks after Russia launched its invasion of Ukraine.

China has repeatedly threatened to assert its claim to Taiwan by force, and has dispatched hundreds of sorties in Taiwanese airspace since Biden took office 18 months ago. The U.S. is legally obligated to ensure the self-governing island democracy can defend itself and treats threats to it with grave concern.

The conversation also comes as Biden’s national security and economic aides near the completion of a review of U.S. tariff policy and prepare to make recommendations to the president.

The tariffs imposed under President Donald Trump applied a 25% duty on billions of dollars of Chinese products. The penalties were intended to reduce the U.S. trade deficit and force China to adopt fairer practices.
Hindustan Times