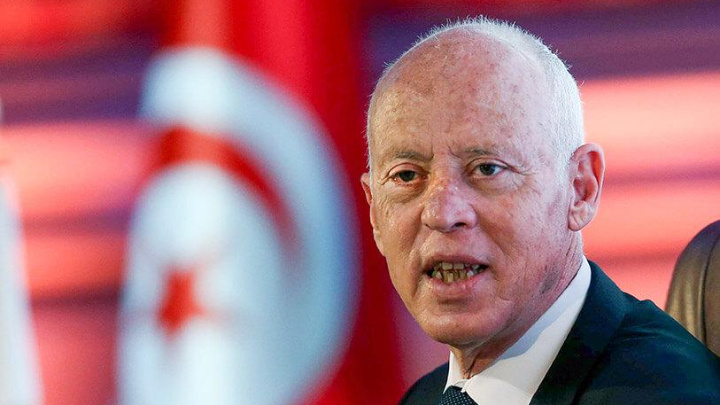 Tunisian President Tunisian President Kais Saied on Tuesday celebrated the almost certain victory of the "yes" vote in a referendum on a new constitution that strengthens the powers of the head of state and risks the return of authoritarian rule in the birthplace of the Arab Spring.

The referendum, held a year to the day after Saied sacked the government and froze parliament in what rivals have called a coup, saw at least 27.5 percent of 9.3 million registered voters cast ballots, Tunisia's ISIE electoral commission said late Monday after polls closed.

An overwhelming 92-93% of those who voted supported the new constitution, according to an exit poll taken by the Sigma Conseil institute. Initial results are due Tuesday afternoon.

After the projected outcome was announced on national television, Saied supporters drove cars in procession through central Tunis, waving flags and beeping their horns, with some singing the national anthem or shouting "We would sacrifice our souls and our blood for you, Saied!"

Members of the election committee count votes at a polling station during a referendum on a new constitution in Tunis on July 25, 2022 Reuters

At around 0100GMT, the president appeared in front of a jubilant crowd.

"Tunisia has entered a new phase," he said, according to local television, adding that "there was a large crowd in the polling stations and the rate would have been higher if the vote took place over two days."

Monday's turnout, which stood at 27.5 percent, was seen as a gauge of Saied's popularity after a year of increasingly tight one-man rule that has seen scant progress in tackling the North African country's economic woes. The last legislative elections in 2019 attracted 32% turnout.

Without naming them, the president promised "all those who have committed crimes against the country will be held accountable for their actions."

Many voters were from the "middle classes most impacted" by years of economic crisis, Sigma head Hassen Zargouni told AFP.

Saied's move against a system that emerged after the 2011 overthrow of dictator Zine El Abidine Ben Ali was welcomed by many Tunisians fed up with high inflation and unemployment, political turmoil and a system they felt had brought little improvement to their lives.

Turnout on the day was higher than many observers had expected, showing that Saied continues to enjoy personal popularity almost three years into his mandate.

"Tunisia will prosper from today onwards," Imed Hezzi, a 57-year-old waiter, told AFP after voting. "The start of the new Tunisia is today."

Saied's critics have warned the new constitution would lock in presidential powers that could tip Tunisia back into dictatorship.

The new text would place the president in command of the army, allow him to appoint a government without parliamentary approval and make him virtually impossible to remove from office.

He could also present draft laws to parliament, which would be obliged to give them priority.

The new charter "gives the president almost all powers and dismantles any check on his rule and any institution that might exert any kind of control over him," said Said Benarbia, regional director of the International Commission of Jurists.

"None of the safeguards that could protect Tunisians from Ben Ali-type violations are there anymore."

The text "doesn't even envisage the possibility of a no vote", he added.

The charter would replace a 2014 constitution that was a hard-won compromise between Islamist-leaning and secular forces.

The draft constitution was published this month with little reference even to an earlier text produced by a committee Saied had appointed.

Sadeq Belaid, a mentor of Saied who led the process, warned that the first draft risked creating a dictatorship.

Slight amendments did little to address such concerns.

Opposition parties and civil society groups had urged a boycott of the referendum, but the powerful UGTT trade union declined to take a position.

Saied, a 64-year-old law professor, won the 2019 presidential election in a landslide, building on his image as an incorruptible political outsider.

But he has vowed to protect freedoms and describes his political project as a return to the path of the revolution.

Labourer Ridha Nefzi, 43 said: "The country's run into a brick wall. But today we turn a new page."

But Saied's popularity is tempered by soaring inflation, youth unemployment of 40% and the potentially tough conditions attached to a looming bailout by the International Monetary Fund.