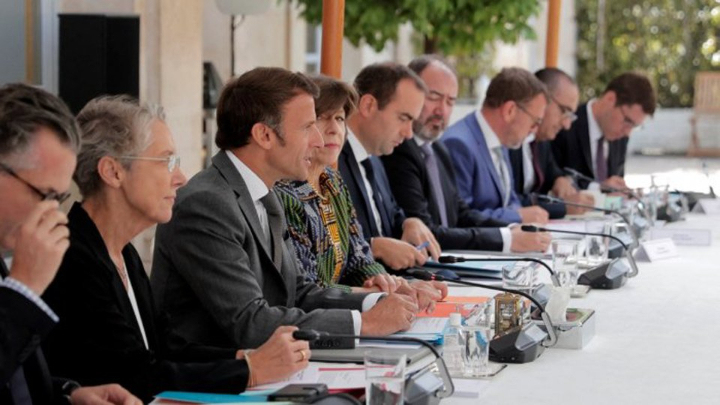 French President Emmanuel Macron met senior ministers on Monday to calm concerns that preparations for the Paris 2024 Olympics are beset by security and budget worries, almost two years to the day before the sporting extravaganza opens.

The Olympics should be a centrepiece of the freshly re-elected Macron's second term, projecting an image of a France comfortable in its modern identity and open to the world.

But as the opening ceremony on July 26, 2024 draws closer, concerns have grown over costs and security preparations.

France's reputation as a reliable host of sporting events took a major battering following the chaos that marred the Champions League final between Liverpool and Real Madrid in Paris on May 28, which critics blamed on heavy-handed policing.

A particular subject of anxiety is the ambitious vision -- in a typical Macron flourish -- of an opening ceremony which will not take place as is customary in the athletics stadium, but as a flotilla down the River Seine.

The meeting at the Elysee Palace included key ministers such as Interior Minister Gerald Darmanin and Sports Minister Amelie Oudea-Castera -- as well as the head of the Paris organising committee, the three-time Olympic slalom canoe champion Tony Estanguet.

"We are two years to the day from the start of the Games. Now it's really a race against the clock," Macron said in an interview with L'Equipe sports daily published Tuesday.

The Olympics organising committee COJO has a budget of four billion euros ($4.1 billion), as does its partner organisation SOLIDEO, which is charged with building the peripheral infrastructure.

But rising inflation means savings have to be made and so far not enough sponsors have been found to plug the gaps.

"Everything is very tight concerning the budget," said a source close to the issue who asked not to be named, adding the extent of the challenge would be clear in the autumn.

An Elysee official said a "dialogue had now started" with the International Olympic Committee over where savings can be made.

"I reaffirmed a simple principle: there will be no Olympics tax. The Games must finance the Games," Macron insisted in his L'Equipe interview.

Organisers also revealed their official slogan -- "Games Wide Open" -- and said 13 million tickets will be sold for the Olympics and Paralympics, with nearly half of those reserved for the public set to be sold at less than 50 euros ($51).

The state "will buy 400,000 tickets which it will distribute to young people and schoolchildren, especially those under 16," Macron told L'Equipe.

Security is another headache, especially as the vision of the Games is to hold many events in the centre of Paris. This includes events around the Eiffel Tower and the central Place de la Concorde, which is close to the Elysee Palace.

In addition to the French security forces, more than 20,000 private security agents need to be hired.

Estanguet insisted that Macron had been preparing "from the first day".

But he acknowledged: "In recent months, the situation distanced him a bit away from the Games project, so he wanted to reconnect with the different subjects," he said.

France's top audit body, the Cour des Comptes, has warned in a report that it is "imperative" to ramp up preparations to deal with the "considerable" security challenge.

"A more precise definition of security needs is becoming urgent," said the report, the initial version of a study that will be published later this year. It was first revealed by the Canard Enchaine weekly and then seen by AFP.

The report also suggests scaling down the opening ceremony, which is set to feature an armada of 200 boats and some 600,000 spectators.

The Le Monde daily said the prospect of the river opening ceremony -- with spectators packed on the banks of the Seine -- was giving the organisers "cold sweats".

The Games will pose a unique challenge. The showcase athletics and swimming events are due to be held in Seine-Saint-Denis north of Paris, one of the lowest-income areas in France, with a cluster of events in the centre of the capital.

Sailing events will take place at the other end of the country in the Mediterranean city of Marseille, while the surfing will be in the Pacific territory of French Polynesia, on the other side of the world.
BSS