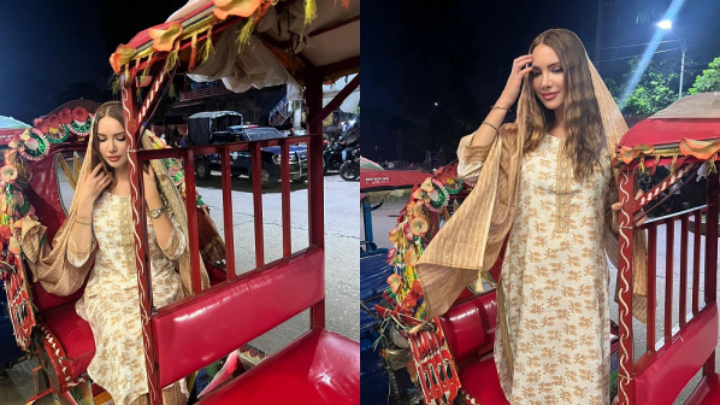 The gorgeous Romanian singer Otilia Brumă recently posted several pictures of herself in a salwar kameez while riding around the busy streets of Dhaka in a rickshaw.

The "Bilionera" singer was wearing a beautiful light-beige salwar kameez with a chestnut-brown orna on top of her head. She looked divine in the simple yet elegant three-piece outfit.

Earlier on Sunday, Otilia had posted a picture of her wearing a stunning crimson maslin sari. It seems the singer has fallen in love with the beauty of Bangladeshi culture and our dresses.

Otilia enthralled the audience with her first-ever concert in Bangladesh on Saturday, with fans thrilled to see the superstar during the launching of Nokia G21 at International Convention City Bashundhara (ICCB).

Otilia is famous for her song "Bilionera", which became a global sensation upon its release in 2014. The music video for the song has over 550 million views on YouTube.

After her hit song "Bilionera", Otilia released another track "Prisionera" which also became popular among her fans.