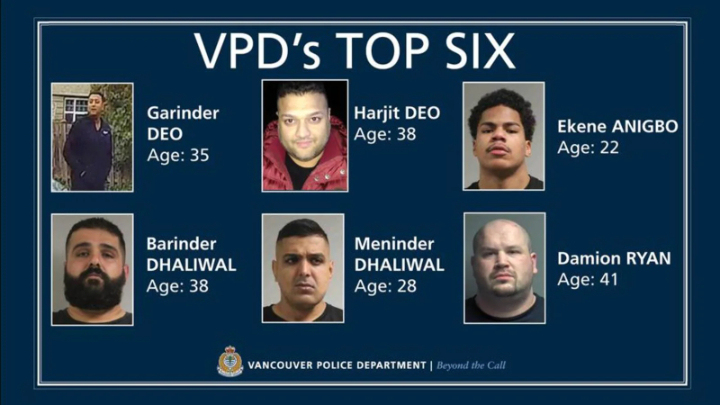 Two persons have been charged with murder for the killing on Sunday of two Indo-Canadians in British Columbia, including a prominent gangster.

The victims, who were killed in the town of Whistler on Sunday afternoon, and those arrested, are all believed to be linked to gangs operating in the Metro Vancouver region.

The two who were taken into custody and charged in a Vancouver court on Monday are 24-year-old Gursimran Sahota and 20-year-old Tanvir Khakh, both from the town of Surrey.

They have been charged in the case of the double homicide of Satindera Gill and Meninder Dhaliwal, both of whom were “known to police”, according to a release issued by the Integrated Homicide Investigation Team (IHIT).

Dhaliwal, considered a major figure in the Brothers Keepers gang, was among “several individuals identified by the Combined Forces Special Enforcement Unit (CFSEU-BC) as posing a significant risk to public safety with connections to gangs”, IHIT said. The investigation was conducted in coordination with the Sea-to-Sky Whistler unit of the Royal Canadian Mounted Police (RCMP).

In fact, in May last year, Dhaliwal was among six gangsters identified by the Vancouver Police Department (VPD) as posing a danger to the public simply because they were potential targets for rival gang members.

The surge in gang violence and conflict in the region has included turf wars, as the news outlet Vancouver Sun reported that the alleged killers may have been connected to the rival UN gang.

Sahota, it reported, was charged in local robberies in 2019 along with Karman Grewal. On May 9 last year, Grewal, 28, was executed by suspected rivals outside the main terminal of the Vancouver International Airport on a Sunday afternoon, with the suspects firing upon pursuing police while fleeing. No arrests have been made in that case. Interestingly, Grewal was considered “very close” to gangster Jimi Sandhu, who was deported to India in 2016.

“Three other individuals were arrested along with Khakh and Sahota. The extent of their involvement is still being determined. This investigation is still ongoing,” the IHIT added.
Hindustan Times