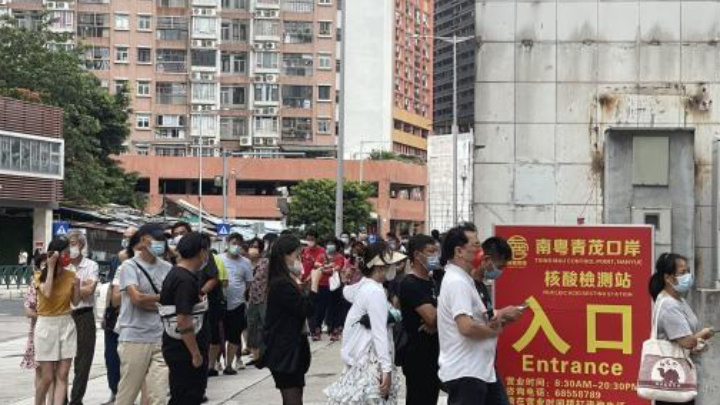 Macau reported more than two dozen Covid-19 infections over the weekend, the first in the gaming hub in eight months, and warned there was a significant risk of more to come.

There were 31 positive cases in the local community as of Sunday evening, the government said in a Facebook post, coming just days after easing visitor quarantine requirements. The government instituted mass testing of residents between Sunday and Tuesday, with schools and “non-essential business” shut until further notice.

Restaurants, bars and casinos remain unaffected for now, although officials have encouraged them to take measures such as suspending dining-in services or operations to reduce visitation.

Neighboring mainland city of Zhuhai has required seven days of home quarantine and another seven days of “self health monitoring,” for those who arrive from Macau, according to a government statement on Sunday.

The latest Covid flareup is a fresh blow to Macau’s gaming industry, which has been suffering from a tourism drought since March amid outbreaks in mainland China, the city’s largest source of visitors. The enclave’s casino revenue plunged more than 60% year-on-year in both April and May, while operators burn through millions of dollars of cash every day.

Gross gaming revenue is likely to hit “near-zero levels” for at least a few weeks until the situation is under control, said JPMorgan Chase & Co analysts including DS Kim in a note on Sunday. In a worst-case scenario of no revenue, SJM Holdings Ltd. and Sands China Ltd. will only have enough liquidity to survive until March next year, while most other operators have between one-and-a-half to two years of liquidity, Kim wrote. Galaxy Entertainment Group Ltd. has enough cash to last through five year, according to Kim.

Beijing and Shanghai reported one case each outside of quarantine on Sunday, with authorities in the Chinese capital resuming all subway services and some bus operations. There were 24 local cases nationwide on Sunday.

China is increasingly relying on frequent mass testing to stick to its Covid Zero stance in the face of the hyper-infectious omicron variant. Shanghai plans to test the entire city every weekend until the end of July, and tens of thousands of lab testing booths are being set up across large hubs nationwide to allow regular swabbing.

Hong Kong logged more than 1,000 cases daily over the weekend. Its outgoing Chief Executive Carrie Lam has refrained from imposing new restrictions, telling the South China Morning Post that the city’s tough border-control measures “are not tenable” and the government should make a decision if it wants to fully reopen by the end of this year.

Macau and Hong Kong are semi-autonomous special administrative regions of China that maintain a degree of economic independence.

Macau last week eased quarantine requirements for arrivals from Hong Kong, Taiwan and other places, cutting the isolation period to 10 days from 14, plus seven days of self monitoring. The number of visitors to the city plunged 24% in April from a year earlier after a 30% decline in March. Revenue for its key casino industry dropped 68% in May to 3.34 billion patacas ($413 million) as China tightened travel restrictions during a record Covid outbreak.

On Saturday, Macau officials announced the city would enter an “immediate state of Covid-19 prevention” amid a significant risk of Covid transmission after a preliminary positive case was detected in the community.

Macau’s Secretary for Social Affairs and Culture Ao Ieong U, during a media briefing Sunday, called on residents to stay at home. The government also urged residents “not to panic buy” and said there would be adequate supplies of food and essential goods.

Authorities are still investigating the source of the infections after uncovering some of the cases during the lockdown of a building where residents were tested, the city’s health officials said. Those who tested positive include a cluster of workers employed from outside of Macau, and their colleagues and employers. Another cluster involves a person working at a prison and his relatives, according to a government statement.
Hindustan Times