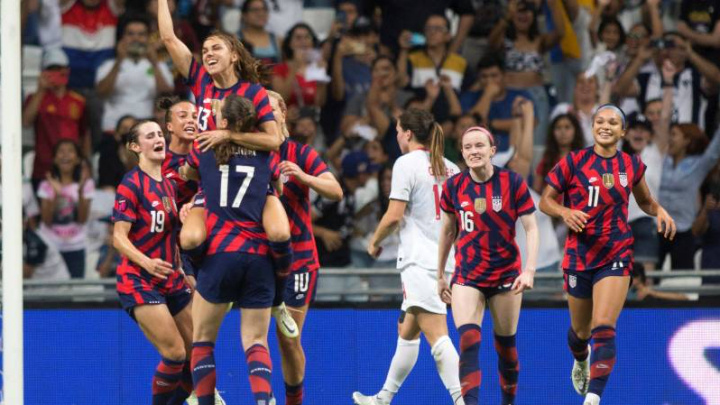 The United States qualified for the 2024 Paris Olympics on Monday by defeating Tokyo Olympic champions Canada 1-0 in the CONCACAF W Championship final.

Alex Morgan scored from the penalty spot in the 78th minute to seal victory as the reigning world champions avenged their upset loss to the Canadians in last year's Olympic semi-finals.

Morgan rifled a left-footed spot-kick into the bottom right corner of the goal after Canadian goalkeeper Kailen Sheridan, Morgan's club teammate on the San Diego Wave, dove the opposite way.

It was Morgan's 118th career goal for the US national squad.

The US won the penalty when Canada's Allysha Chapman fouled American Rose Lavelle in the area.

"It always feels good to be called a champion," Morgan said afterwards. "So this game means a lot to us. It's always going to mean a lot. Canada gave us a run for our money. But we prevailed and feel good about the performance."

Morgan's winner continued the veteran striker's recent run of good form. Morgan is leading the NWSL scoring charts with 11 goals for the Wave.

Morgan only returned to international duty last month after an eight-month hiatus that she says helped her "mentally and physically."

"I feel like I'm in form, and some of the younger players are able to look up to the older players," she said. "Especially in a big tournament like this - you just can't replicate that in friendlies."

The Americans captured a third consecutive CONCACAF crown and ninth overall to secure their ticket to France while Canada was denied a bid for a third North American regional title after 1998 and 2010.

Despite the defeat, the Canadians can still earn a 2024 berth in Paris. They will meet Jamaica next year in a playoff to determine another Paris slot.

Earlier, Kalyssa van Zanten scored in the 102nd minute to give the "Reggae Girlz" a 1-0 extra-time triumph over Costa Rica in the third-place match to advance to that Olympic playoff.

The eight-team North American regional tournament also served as a qualifier for the 2023 Women's World Cup, with the four semi-finalists -- the United States, Costa Rica, Canada and Jamaica -- all securing berths at next year's showdown in Australia and New Zealand.
BSS