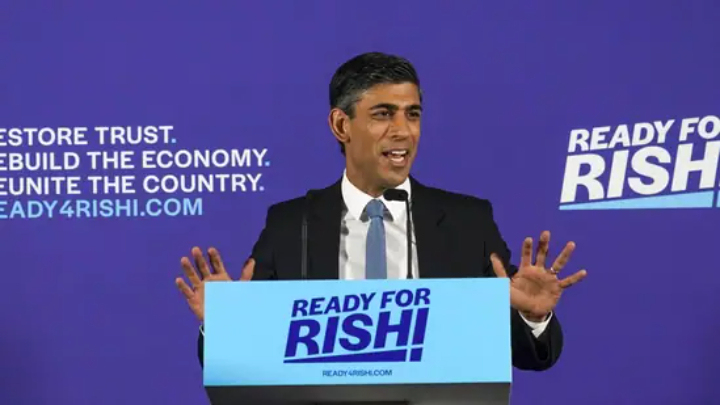 The leading contender to become the UK’s next prime minister said he plans to make the most of the opportunities thrown up by shaking off the “shackles” of European Union regulation.

Writing in the Telegraph newspaper, former Chancellor Rishi Sunak said that, if chosen to lead the Conservative Party, he will have “scrapped or reformed all of the EU law, red tape and bureaucracy that is still on our statute book and slowing economic growth” in time for the next election.

So far in the leadership race, Sunak has tapped into the support of moderate MPs, while drawing fire from opponents who accuse him of championing of high-spend, high-tax policies.

In a pitch to the right wing of the party, he said he’d task a new “Brexit delivery” department with reviewing 2,400 EU laws still on the statute book, scrap the EU’s Solvency II rules to incentivise investment, replace the bloc’s data privacy regulations and speed up medical trial approvals.

To become premier, Sunak must fend off the challenge of other leadership contenders including Penny Mordaunt and Liz Truss.

The next vote in the Conservative leadership context will be on Monday afternoon. By Wednesday, the field will be narrowed to two contenders who will face off in a ballot of party members.

Almost half of the voters for the UK’s governing Conservative Party believe Rishi Sunak will make a good Prime Minister, according to the results of a new opinion poll on Sunday.

‘The Sunday Telegraph’ reports that the JL Partners poll of more than 4,400 people found that 48% of those who backed the Tories in the 2019 general election felt the former Chancellor would be a good prime minister.

This is also the first poll that puts foreign secretary Liz Truss in second place, with 39% backing her for premier and 33% in favour of trade minister Penny Mordaunt.

Among all voters, the most popular policy priority was to “turn the economy around.
Hindustan Times