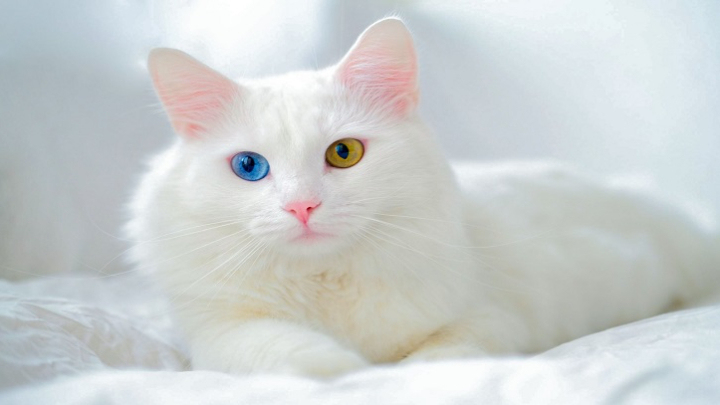 Having a cat can be a great thing. They’re your personal companion, and it’s a very rewarding experience. However, some cats have quirky and unusual personality traits. Have you wondered why your cat head-butts people, or why they push things off the kitchen counter all the time?

It’s true that cats do some pretty weird things, and you try to make sense of it. However, you don’t have to wonder why they run around your home at 3 a.m. or anything else. Here are real explanations as to why your feline friends do those strange behaviors. Learn a bit about what makes your cat tick!

Pawing at the Water Is Instinct

One myth is that cats don’t like water, but that’s not always true. Some love it; if you see your cat pawing the water bowl, it’s probably for play. Sometimes, they like to drink moving water, so pawing at it aerates it.

Laying on Your Stuff

You know the aggravation you feel when you’re doing something on the computer, and the cat lays on the keyboard? There’s a reason for that! Your kitty wants more attention from you. That’s why they get between the object you use and you. This is also a territorial thing!

Have you heard your cat chatter its teeth when there’s a bird outside? They don’t have a toothache and aren’t grinding them. Though no one knows for sure, some believe they’re frustrated because they see the bird outside and can’t get to it.

Rear-end in the Face

You know cats like to lift their tails and give you a view of their backsides. While it might not be fun, it should be taken as a compliment. When they lift up their tails and stick their rear end in your face, it’s a sign of affection and trust. They’re opening up to you and being friendly!

Have you noticed your cat bumps into your arms, legs, face, or any part of your body when you are around? They don’t want to start a fight! This gesture indicates that your cat feels safe around you and trusts you. Plus, rubbing against things transfers their body’s pheromones and marks the object as safe.

Rolling on the Floor

Cats roll around on their backs for many reasons. However, they only do it if they’re comfortable, as showing the belly is a vulnerability to them. This motion might be used to stretch the muscles or scratch the back, but sometimes the cat wants to play

When cats stare at you, they are likely trying to get attention. However, different stares have other meanings. If they’re looking intensely, this could be a sign of aggression, so you shouldn’t stare back unless you want your kitty to pounce on your face!

Kneading with the Paws

A kitten’s first instinct is to push into the mammary glands to get more milk. The kneading motion stays with them, and adult cats tend to do it when they associate something with their mothers. Overall, they feel content and happy.

Cats are very smart; they may not answer, but they know the owner’s voice and their name. Overall, cats show affection when they want to. It doesn’t mean you’re not heard. Don’t take things personally; they come back when they want affection.

You know that cats are active and awake while you’re trying to sleep. Their excess energy results in them wailing and running around your home. The cries might be because they’re trying to catch something in the house or are frustrated because there is nothing to catch.

Sprinting around the House

Have you heard a strange noise only to have your cat run in at full speed from nowhere? This isn’t abnormal. Cats have tons of energy, and they need a way to release it since they don’t hunt. House cats don’t have tons of room; with no prey to catch, they show bursts of activity to release energy!

It’s quite shocking when cats drop lifeless mice at your feet, but it’s the thought that counts. To survive as kittens, the mother cat brings food to the babies. Therefore, your cat might have learned it from her. Overall, they accept you as a member of the pack.

Seeing the cat lounge on a chair with their legs sprawled out can appear silly, but it’s important. This position indicates that the feline is comfortable, relaxed, and safe. Feel honored that they trust you enough to be cozy like that!

Outside the Litter Box

It’s quite annoying when your cat does their business outside the litter box, but this could indicate a serious problem. If they don’t use it, they might not like the litter, location, or the actual box. It’s best to change things up and go to the vet to rule out a medical issue.

Cats talk with their ears, and each movement means something. If they twitch the ears back and forth, it’s a sign that they’re agitated or anxious. Try to leave them alone when they get like this.

You’re sitting on the couch when a small ball of fur comes from nowhere and attacks your feet. This is surprising, especially for barefoot people. However, they’re not attacking you. It often means they’re practicing jumps and pounces and want to play.

Cats are naturally suspicious, so if they’re all in your face and sniffing your skin, don’t be afraid. It feels weird when they’re in your personal space, but it’s because they’re getting a sense of your scent. They’re checking to see if you’re really you!

Cats instinctively bury their droppings after visiting the litter box. That’s because they don’t want predators to get their scent in the wild or for other cats to rear up and kick them out of the pack. In fact, if they don’t do that, there could be something wrong!

When your kitty snuggles up, they like you, but it also means they’re trying to bond. They realize that you care for them and want to show their appreciation for all that you do. Don’t push them away; let them strengthen their bond with you.

Cats bite for various reasons. In the wild, it’s a normal way to express themselves, so they do that even when they’re domesticated. However, they may also be stressed or angry, and that’s the only way to express those emotions.

Sleep is when kittens release growth hormones, so young cats tend to sleep a lot. Don’t let that concern you, though. Still, adult cats may also doze off during the day. They do it to save energy or might from boredom. Try playing with adult cats to keep them awake longer.

Sometimes, cats press their heads to hard objects for no reason and might make unusual sounds. It’s not because they’re guilty about something they did. If they do that, this is not normal. A trip to the vet is in order; they could be poisoned, have a tumor, or experience trauma to the nervous system!

Don’t be upset if your kitty chews on something other than toys or food. It could be from pica, and no one knows what causes it. However, experts believe there’s a connection with nutritional issues or anxiety. Keep an eye on them if they’re chewing on things or ask a vet’s advice.

It’s oddly satisfying to hear your cat purr while petting them. However, it’s not that simple. Sometimes, that sound indicates that your pet is satisfied and healthy, but it means other things. They use it as communication and a relaxation method when they’re stressed.