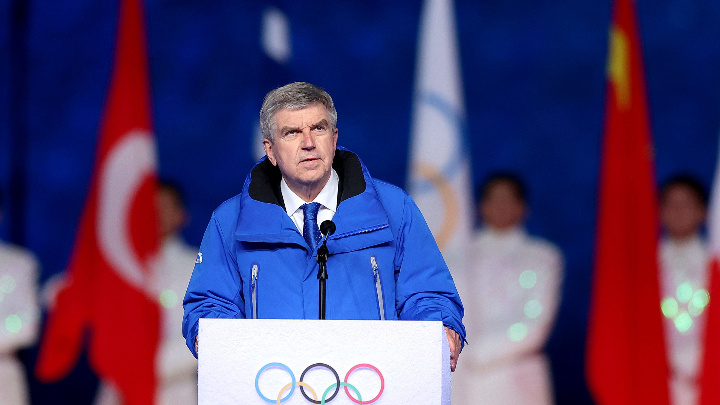 Olympics chief Thomas Bach on Sunday said the organisation would ensure that Ukrainian athletes could compete at the 2024 Games despite the Russian invasion.

Speaking during a visit to Kyiv to meet Ukrainian President Volodymyr Zelensky, Bach pledged to increase the amount of IOC funding for athletes from the war-torn nation.

"The IOC will triple the fund we have been establishing at the very beginning of the Russian invasion in Ukraine from $2.5 million to $7.5 million," he added.

"The Russian invasion has become a cruel shock for the Ukrainian sports," he said, speaking after his meeting with Bach.

"A lot of Ukrainian athletes joined the Ukrainian armed forces to defend our country, to defend it on the battlefield.

"Eighty nine athletes and coaches died as the result of the military combat. Thirteen are captured and are in the Russian captivity."

The IOC responded to Russia's invasion of Ukraine in February by recommending that international sports federations ban Russian and Belarusian athletes.

Bach said that the IOC would not be changing its position.

"We also reassured the president (Zelensky) we maintain the position we took at the very beginning of the war, which is very clear," he said.

"Including the recommendations towards international federations not toinvite Russian and Belarus athletes to international competitions.

"The time has not come to lift these recommendations."

"It cannot be allowed that a terrorist state uses sports to promote its political interests and propaganda.

"While Russia is trying to destroy the Ukrainian people and conquer other European countries, its representatives have no place in the world's sports community."

Among a raft of sporting sanctions, Russia has been suspended from international football tournaments, the Russian Formula One Grand Prix was cancelled and Russian and Belarusian tennis players have been banned from Wimbledon.
BSS