It was landing at Singapore's international airport a decade ago that sparked Shara Ticku's idea to create a lab-grown alternative to palm oil.

"In 2013 I flew to Singapore, and when I landed I had to wear a mask," says the boss of US tech firm C16 Biosciences. "The air was toxic because they were burning the rainforest in Indonesia."

Indonesian farmers, who were clearing land for palm oil and other crops, were blamed for the fires and the smoke that drifted across the sea to Singapore.

Fast forward to today, and her business has just commercially released an alternative to palm oil that is created from yeast cells.

Palm oil remains the world's most-produced vegetable oil, accounting for 40% of the total, according to the World Wide Fund for Nature (WWF). 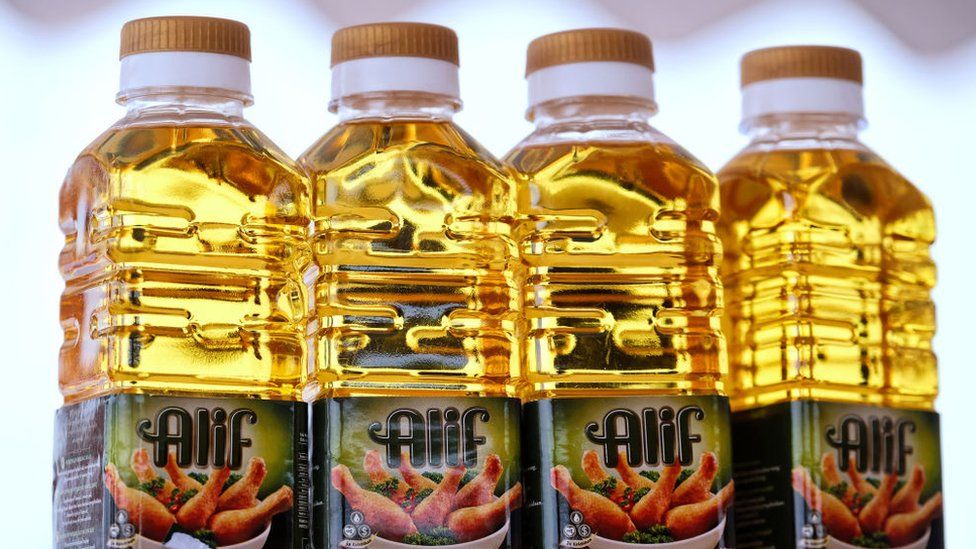 IMAGE SOURCE,GETTY IMAGES
Palm oil is used as a cooking oil and an ingredient in processed foods and other products

It is supremely popular with food and cosmetics firms because it is so useful. Odourless, tasteless and colourless, it doesn't alter the smell, taste or look of products.

Instead it adds a smooth texture, and works as a natural preservative. And it maintains its properties under high temperatures, also making it ideal for cooking with.

In fact it is so widely used, that palm oil or its derivatives are found in almost half of all products on supermarket shelves, according to the WWF. This includes everything from chocolate, to shampoo, pizza, toothpaste, and deodorant.

"No matter how hard you try, every single person touches palm oil everyday," says Ms Ticku. "It is in everything."

The widely-documented problem with this usage is that this demand for palm oil has led to significant deforestation in areas where oil palm trees can grow - low-lying, hot, wet areas near the equator. 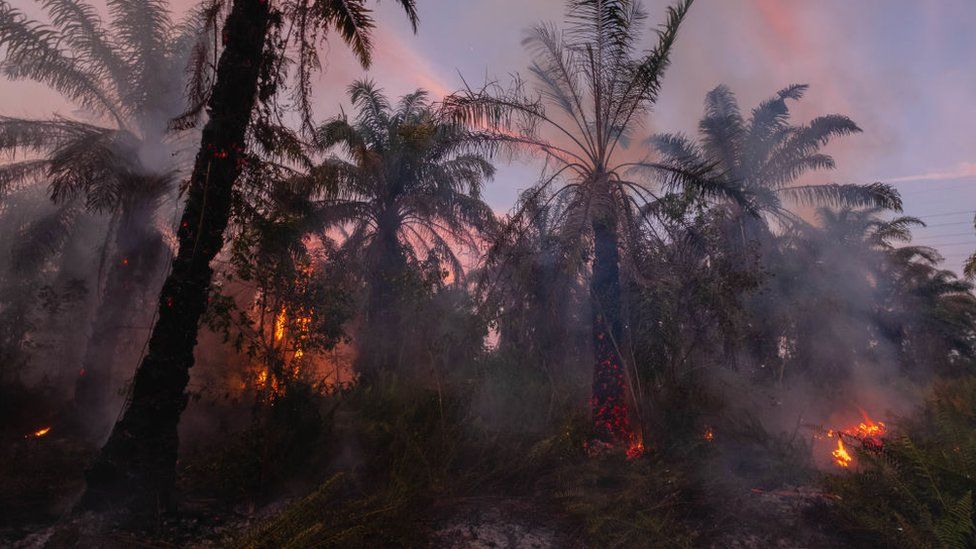 IMAGE SOURCE,GETTY IMAGES
Rainforests in Indonesia and Malaysia are often set on fire to clear the land for oil palm plantations

The use of this land for palm oil cultivation, 85% of which is in Indonesia and Malaysia, has increased almost nine-fold from 3.3 million hectares (eight million acres) in 1970 to 28.7 million hectares in 2020. 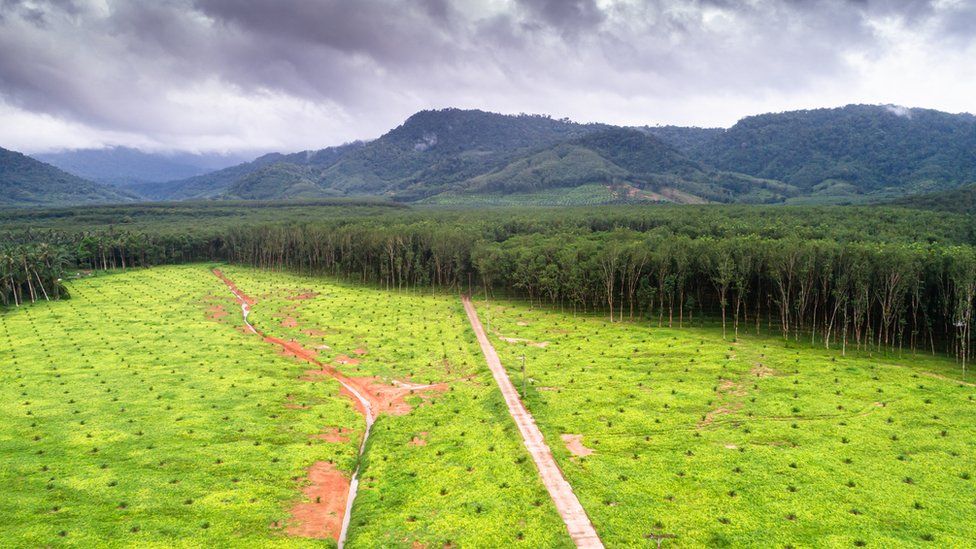 IMAGE SOURCE,GETTY IMAGES
The oil palm plantations can stand out against a rainforest backdrop 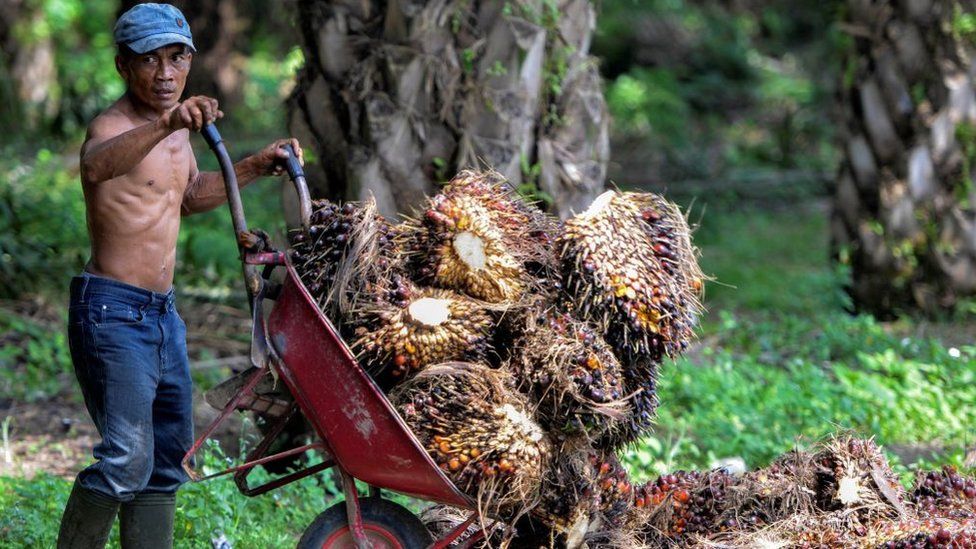 Oil palms produce about 5,000 kg of oil per hectare per year

To try to reduce the world's reliance on palm oil, Ms Ticku, who was formerly an investment banker, and her co-founders set up C16 Biosciences in New York City in 2018. Backed by multi-million dollar funding from Microsoft founder Bill Gates, the company has spent the past four years developing and finessing their product, which is called Palmless.

They grow a strain of yeast that naturally produces an oil with very similar properties to palm, which they harvest. The yeast is fed on sugars from sugar cane plants grown on land already used for arable farming.

"Our process takes less than seven days from start to finish," says a spokeswoman for C16 Biosciences. "For a traditional oil palm tree, the oil wouldn't be ready to harvest until years after the seed is planted, and most trees don't reach peak production until seven years later."

She adds that the company is now "actively collaborating on partnerships in the beauty and home categories - for example, moisturisers, nourishing oils, soaps and cancels". "[And] we plan to enter into food in 2024."

Another reason for the continuing popularity of palm oil is that it is very productive. 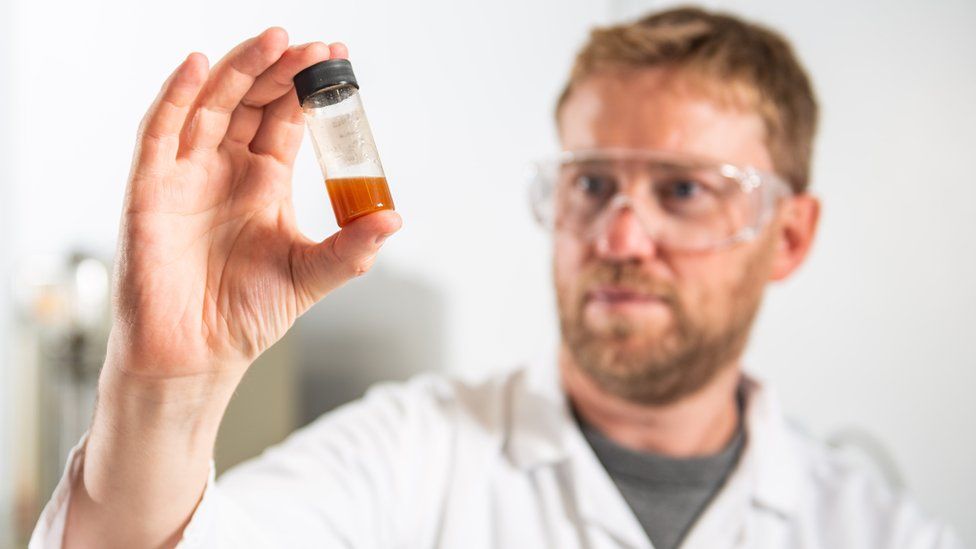 Using other edible oils might take pressure off tropical forests, he says, but you'd be sacrificing much more land to agriculture elsewhere.

To reduce demand for palm oil, Prof Chuck leads another team that has created its own yeast-sourced alternative.

Prof Chuck says that he and his colleagues - biologists, chemists, mechanical engineers, chemical engineers and food scientists - worked hard to find a yeast that was sufficiently robust and produced high oil yields.

"You put the yeast in a horrendous environment, forcing it to evolve so it can survive. You're simply speeding up a natural process," he explains.

After hundreds of generations of yeast, and years of trial and error, they arrived at a unique strain called Metschnikowia pulcherrima, or MP for short.

MP is said to be hardy and not fussy what it eats. It can be fed on grass and food waste. And at the point of harvesting, its cells are full of oil. 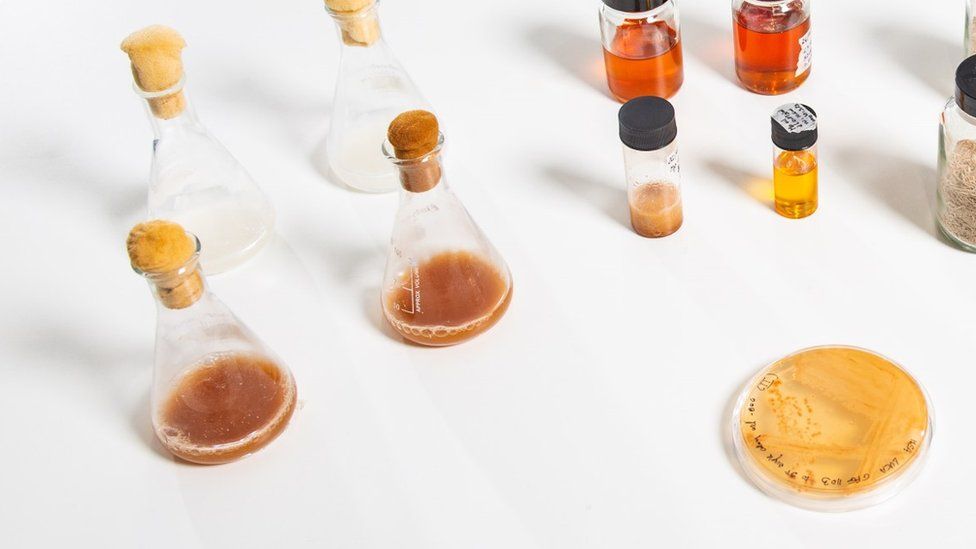 The yeast cultivated by the team at Bath University, bottom right, can produce various grades of oil

Even the leftover yeast cell biomass need not go to waste. It can be used for other products, for example creating a substitute for soya protein.

Prof Chuck says the aim is for the oil to be as sustainable as possible.

"In the best case scenarios we've modelled," he says, "it could be even just a couple of percent of the greenhouse gas emissions from palm oil grown in Indonesia or Malaysia."

After a successful pilot, the team is now ramping up to industrial scale. And a private business has been formed called Clean Food Group, which recently partnered with a yet to be revealed UK supermarket.

Prof Chuck hopes that in five years, we could see 500,000-litre bioreactors, similar to those used by major breweries, producing the yeast - and giving palm oil a run for its money.

So, can we live without palm oil? Lab-developed alternatives could become a crucial tool in combating climate change caused by deforestation, plus preventing biodiversity loss and future food insecurity.

"There's a lot of excitement and hype - a lot of people rushing into this space. And that's great," says Prof Chuck. "The mounds of oil produced globally are so enormous - there's space for everybody."