From hi-tech coatings to improving the state of the roads, there is a plethora of ways we can reduce the amount of fruit and veg that goes bad before it reaches our plates.

It's a problem humans have been reckoning with since the first moment we had more food than we could eat in one go. When food is abundant, how do you store it to make it last?

The question has almost as many answers as there are foods. The ancient Greeks washed figs in seawater and dried them in the hot sun, while in medieval China lemons and oranges were covered in waxes. In 15th Century Japan, vegetables were coated with soy milk to prevent moisture loss and extend their shelf-life. In 16th Century England, meanwhile, they were coated with lard.

The problem of rotting apples and mouldering grain may have been a matter of season-to-season survival for our ancestors. Today preventing food waste is no less of a challenge, though the stakes have changed somewhat. The world's greenhouse gas emissions from wasted food are about 10 times greater than those from the UK.

Wasted meat contributes the most to these numbers, as the energy required to produce it is typically many times greater than plant-based foods. Throw out 100g of steak and you might have just squandered as much as the equivalent of 10kg of CO2. By mass, however, it's fruits and vegetables that make up for the biggest pile of wasted food: roughly half a billion tonnes per year. In the UK, oranges and mandarins are number one among wasted produce, followed by apples and tomatoes.

So how can we best preserve our fruit and veg to ensure more gets to our plates?

Among the tools that producers currently have to reduce food waste, many involve the use of plastics and chemicals. A Swiss study published in 2022 showed that the climate benefits of wrapping cucumbers in plastic are almost five times higher than the negative climate impacts of the packaging itself. Chemicals such as chlorine, hydrogen peroxide and trisodium phosphate, meanwhile, have long been used to kill various microorganisms on fresh produce to prevent spoilage and extend shelf lives. 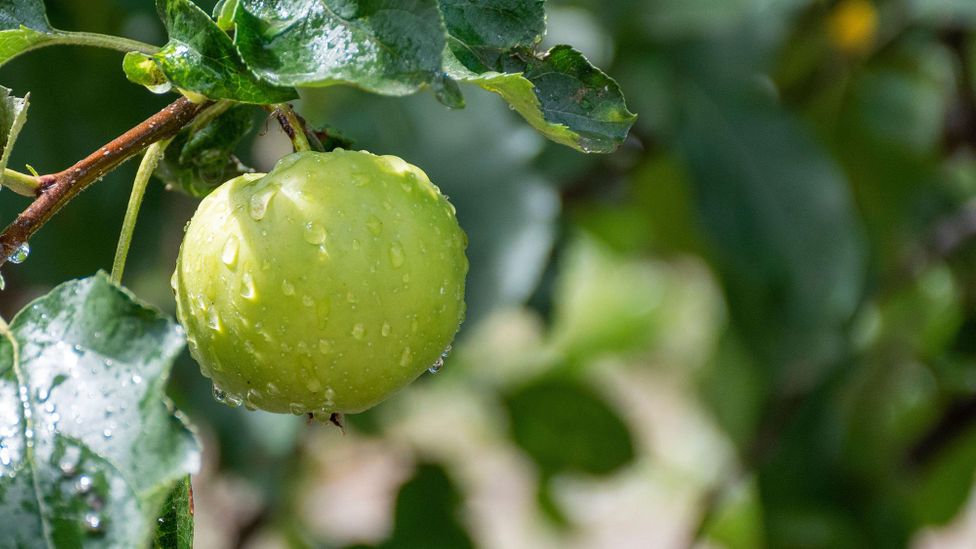 Yet customers are turning away from both chemical treatments and plastics. Chlorination may lead to formation of compounds that are suspected carcinogens, and which may either end up in drinking water (as a result of industrial processing of fruits and vegetables) or remain on the produce.

When it comes to plastics, many of us feel guilty about the amounts they use. According to David McClements, a food scientist at the University of Massachusetts, there is now a "big push to replace plastics" and find other ways to preserve fruits and vegetables that don't involve chemical treatments. While many of the new technologies are still limited to research labs, others are starting to appear on supermarket shelves, or soon will.

One potentially promising technology is edible coating: covering fruits and vegetables in a film of protective material that can be consumed with the food. Modern commercial coatings have come on a fair way since the early soy and lard experiments in Japan, England and elsewhere. Coatings based on beeswax or paraffin took off in 1930s, when waxing fruits such as apples became popular. Apples have a natural wax coating when they are picked from the tree, though this is often lost in the washing process. Today, an artificial coating is often reapplied to apples, oranges, lemons and other fruits to help conserve moisture and extend shelf life.

While these are pretty good at limiting dehydration of produce, there is still great room for improvement. To create perfect edible coatings scientists are now experimenting with many different substances, from silk fibroin (protein secreted by silk worm) and chitosan (a sugar from the outer skeleton of shellfish), to cashew gum, fish gelatine, fenugreek protein, soy protein, cellulose and algae derivatives – the list goes on.

Such coatings, applied by dipping, brushing or spraying, form a thin membrane on the surface of, say, strawberries or tomatoes, reducing transfer of gas and water vapour, limiting browning and aroma loss, and ultimately prolonging shelf life. Ideally such coatings should keep the fruit or the vegetable well sealed, but not too sealed – otherwise you risk inducing anaerobic fermentation (that's when your apple turns into cider, for example).

According to McClements, chitosan, which can be obtained as a by-product from shrimp fisheries, figures quite prominently in the current efforts to find the perfect edible coating. In one recent study covering strawberries with chitosan and whey protein isolate (a by-product of cheesemaking), extended their shelf life by 60% if stored in fridge-like temperatures. Tomatoes with a coating of chitosan and green algae, meanwhile, stayed close to perfect even 30 days after harvest (untreated tomatoes were in very unappealing shape after the same period).

A number of companies around the world are now busy commercialising research on edible coatings. A California-based startup called Apeel Sciences, makes edible coatings from plant oils that can double shelf life. In the US, you can find their coatings on apples, avocados and limes; in the UK, they've partnered with Tesco to sell coated oranges and lemons – things that you still typically peel before eating, as UK and EU have strict regulations when it comes to edible coatings. (The treatments applied to citrus fruit peel is one reason many recipes call for unwaxed fruits.) 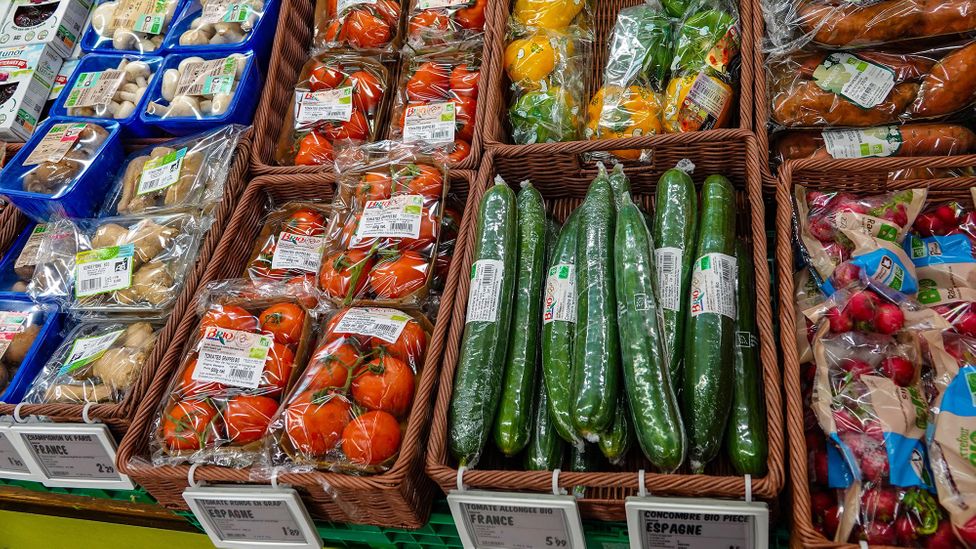 Another company, Liquidseal, sells coatings based on polyvinyl alcohols for mangoes and avocados in the UK – again, fruits with hard peels only. However, Liquidseal has already developed an edible coating for cucumbers to replace those notorious plastic wraps, and hopes to sell it in Europe soon.

Another emerging way to boost edible coatings is to use nano-materials – materials with a particle size of less than 100 nanometres (nm) in at least one dimension (that’s 1,000 times smaller than a human hair). "If you make the particles smaller, you can improve the functional performance of edible films and coatings, for example, by increasing their strength and barrier properties," McClements says.

You can produce such minuscule particles by using lasers, vibrations, plant extracts or even certain microorganisms. In one study, after a week of storage at room temperature, most regular strawberries were covered in fungus. Among those coated with chitosan and nano-silver, however, only 10% were spoiled. Freshly cut carrots coated with silver nanoparticles stayed fine for 70 days. Uncoated carrots lasted a mere four.

Nanoparticles are not only about edible coatings, however. Since some of them are powerful antimicrobials, they can be added to regular plastic packaging to extend shelf life of fruits, vegetables or leafy greens. What's more, they can be used in sensors that could inform retailers or customers that the food is no longer safe to eat, which could help avoid premature trips to the bin. Researchers from Canada’s McMaster University, for example, developed patches that could be applied on produce packaging to predict spoilage.

However, such nanoscale interventions come with safety questions. In mice and rats, ingestion of zinc oxide nanoparticles causes liver and kidney damage. Studies on silver nanoparticles, meanwhile, found toxicity to both model organisms such as the roundworm Caenorhabditis elegans and to human cells.

"There is risk with all novel technologies, and we do have to be careful," says Gustav Nyström, scientist at the Swiss Federal Laboratories for Materials Science and Technology. Nyström points out that silver and zinc nanoparticles can bioacumulate in tissues. However, if such nanoparticles are well encapsulated within plastic packaging, he says, the risk that they would migrate into food is low.

Bacteriophages – viruses that kill bacteria – may be another potential solution to prolonging shelf life of fruits and vegetables and making them safer to eat. An American company, Intralytix, already makes bacteriophage mixes to do just that (so far available only in US, Canada and Israel), while another company, Micreos, offers bacteriophage products for use on leafy greens as well as broccoli, carrots and other vegetables.

Bacteriophages – or phages for short – kill bacteria by dissolving or attacking their cell wall, "a bit like a needle puncturing a balloon", says Gerrit Keizer, managing director at Micreos. As such, phages could potentially replace or diminish the use of disinfectants while still achieving improved shelf life. What’s more, phages are cheap, easy to apply and, above all, harmless to humans. "You are completely covered in phages. They are everywhere. We are constantly consuming them," says Sam Nugen, food scientist at Cornell University. Nugen predicts that in a few years, produce protected by commercial phage mixes "won't be uncommon" in supermarkets. "It’s coming up," he says.

There are many other methods under investigation for keeping fruits and vegetables fresh and safe to eat for as long as possible: plasma-activated water, ozone treatments, high-power ultrasound and bacteriocins (antimicrobial peptides or proteins produced by certain bacteria) have all been suggested. Treating produce with pulsed light, or very strong flashes of light, can keep strawberries nice and firm for eight days in the fridge, while untreated ones will start getting mushy. What’s more, treatments with pulsed light can increase levels of healthy phytochemicals in fruits and vegetables.

Paramount to any of these emerging technologies will be proof that they are safe for customers, as well as doing the job of keeping fruit and veg good for longer. Another challenge is scaling things from labs to real life.

"You have to apply these technologies to millions and millions of fresh fruits and vegetables, and make sure to do it uniformly, do it quickly and cheaply," McClements says.

In the meantime, other solutions to food waste can be rather low-tech. A study of tomato shipments in South Africa showed that a lot of loss was caused by poor road conditions: the tomatoes were simply bumped around too much in the trucks. Elsewhere, food waste prevention can be achieved by proper storage and avoiding over-purchasing – or as simple as not forgetting that box of strawberries hidden at the back of your fridge.