More female journalists are behind bars in Iran than ever before. Among them, Niloofar Hamedi and Elahe Mohammadi, both of whom are accused of "conspiring against national security."

For a long time, Niloofar Hamedi was a sports reporter. She loves soccer, her colleagues write on social media, posting photos of her at games. But for more than two months now, the 30-year-old reporter for Shargh — one of Iran's largest daily newspapers — has been locked-up without charge. Hamedi's lawyer says she's not allowed to contact anyone and that lies are being spread about Niloofar Hamedi and her colleague Elahe Mohammadi.

The two journalists were among the first to report on the death of Masha Amini. Niloofar Hamedi did so from the hospital where Amini was lying in coma before being officially declared dead on September 16. Hamedi was arrested four days later. Elahe Mohammadi worked for the Ham-Mihan newspaper. She traveled to Amini's hometown on Saqqez, in northwestern Iran's Kurdish region, to report on Amini's funeral, which sparked the first protests that would grow into the current movement. Just two weeks later, she, too, was arrested.

Hamedi and Mohammadi stand accused of having ties to foreign intelligence agencies, which, Iran's intelligence service and the Revolutionary Guard's security service claimed in a joint statement in late October, trained them.

On November 16, the US Treasury put six leading functionaries at Iranian state broadcaster IRIB on their latest official sanctions list for their role at that "influential instrument in the Iranian regime's campaign of repression and censorship against its own people." Supporters of the Islamic Republic eagerly accept and spread the disinformation that people like Ameneh Sadat Zabihpour give them. Like the claim of training in hybrid warfare, which implies no less than conducting warfare through a combination of classic military means, economic pressure, disinformation and manipulation. 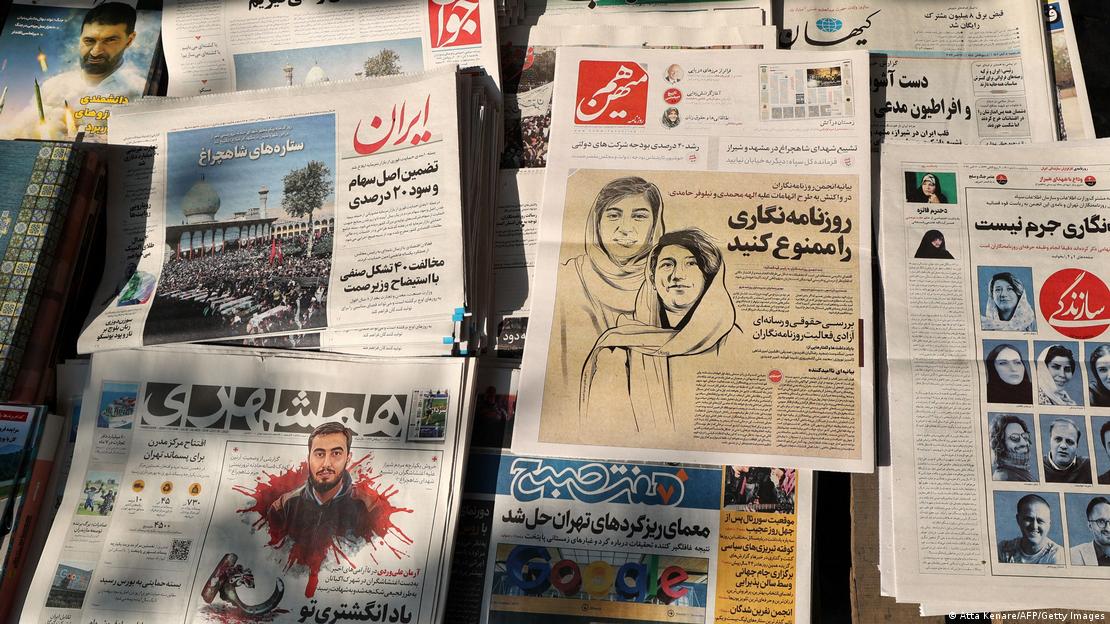 On the front page of the 'Hammihan' newspaper, next to the top story, an ironic headline reads 'ban journalism'Image: Atta Kenare/AFP/Getty Images

"False accusations spread online are dangerous and can later play a major role in court," human rights activist Shiva Nazar Ahari explained to DW. Nazar Ahari is a member of the Iranian Committee of Human Rights Reporters and has been repeatedly arrested, spending several of the past 17 years in jail as a result. She has lived in Slovenia since 2017.

Speaking of the conditions that both prisoners find themselves in, the activist says, "Niloofar Hamedi and Elahe Mohammadi are both in the high-security cellblock 209 at Tehran's Evin Prison. No one knows when they will be put before a judge. What we can see, are channels with close ties to the regime spreading lies sold as fact. For instance, right now, private South African vacation photos are being circulated to manipulate public opinion. It isn't the first time that journalists have been accused of not being independent and of having foreign ties." Nazar Ahari says the campaign is aimed at faithful supporters of the regime rather than a broader audience less likely to believe state propaganda.

No use trying to intimidate

According to the organization Reporters Without Borders (RSF), at least 43 journalists have been arrested since mid-September. Eight have been released, among the 35 still behind bars, 15 are women.

Those women are not letting themselves be intimidated. Kurdish journalism student Nazila Maroufian, for instance, is a 23-year-old from Masha Amini's hometown of Saqqez. Maroufian interviewed Amini's father, who explained that his daughter did not have any pre-existing health conditions that could have led to her death. The interview was published on October 19, under the title "They are lying," on the news site Mostaghel. Shortly thereafter, Maroufian wrote on Twitter: "I have no plans to kill myself and I have no pre-existing medical conditions. I am happy to have conducted and published this interview." Nazila Maroufian was arrested on October 30.

The Iranian regime wants to systematically silence women says Christian Mihr, executive director of Reporters Without Borders Germany. Mihr says there is great concern over the fate of those brave journalists. They were undertaking great risks, even accepting the possibility of execution in order to bring the truth that the Iranian regime is so desperately trying to cover, to light. Three of the journalists currently behind bars were already in jail before the latests wave of repressions.

Iran has for decades been one of the worst countries on the planet for journalists according to RSF's World Press Freedom Index. Last year, the Islamic Republic of Iran ranked 178 of 180.