162 people have died in an earthquake that struck Java, Indonesia Officials reported scores of deaths after an earthquake struck the highly populated island of Java, with tremors also felt in Jakarta. The victims include children who were killed when a school collapsed.

At least 162 people were killed after an earthquake hit the Indonesian island of Java on Monday, with the tremors being felt in the capital Jakarta, the island's governor said.

The magnitude 5.6 quake — according to the US Geological Survey — struck in the afternoon in the Cianjur region of West Java province, some 75 kilometers (47 miles) south of the capital.

On Tuesday, rescuers used heavy equipment and struggled to find more bodies from the rubble of homes and buildings.

West Java Governor Ridwan Kamil told a press conference on Monday night, "I regret to inform that 162 are dead."

At least 326 people were injured in the quake, the governor added, with many sustaining fractures "from being crushed in the ruins."

Kamil said that "the majority of those who died were children." Many of the victims were students in public schools who finished classes for the day and were attending extra lessons at Islamic schools.

Cianjur, a town with roughly 175,000 people, is located in a mountainous district of the same name with over 2.5 million inhabitants. The town is known for having a large number of mosques and Islamic boarding schools.

The number of dead and injured was still being assessed and authorities said both could rise. Earlier estimates put the number of injured at over 700.

Indonesia's national disaster mitigation agency, BNPB, said that at least 25 people are believed to be trapped under rubble.

Power outages have also hampered rescue efforts, with at least one hospital left without electricity — making it

The force damaged several buildings including a hospital and an Islamic boarding school. A man stands in front of the rubble of his home in Cianjur, West Java province after a shallow earthquake rocked the regionImage: ANTARA/REUTERS

Footage broadcast on Indonesian TV showed a number of buildings in Cianjur that had been almost totally destroyed. Images showed cracked roads and houses badly damaged in Cianjur's Cugenang area.

Agus Azhari told news agency AFP he was with his elderly mother when strong tremors destroyed their living room within seconds. Parts of the walls and roof fell-in around them.

"I pulled my mother's hand, and we ran outside," he said. "I heard people screaming for help from all around me," the 19-year-old told AFP. 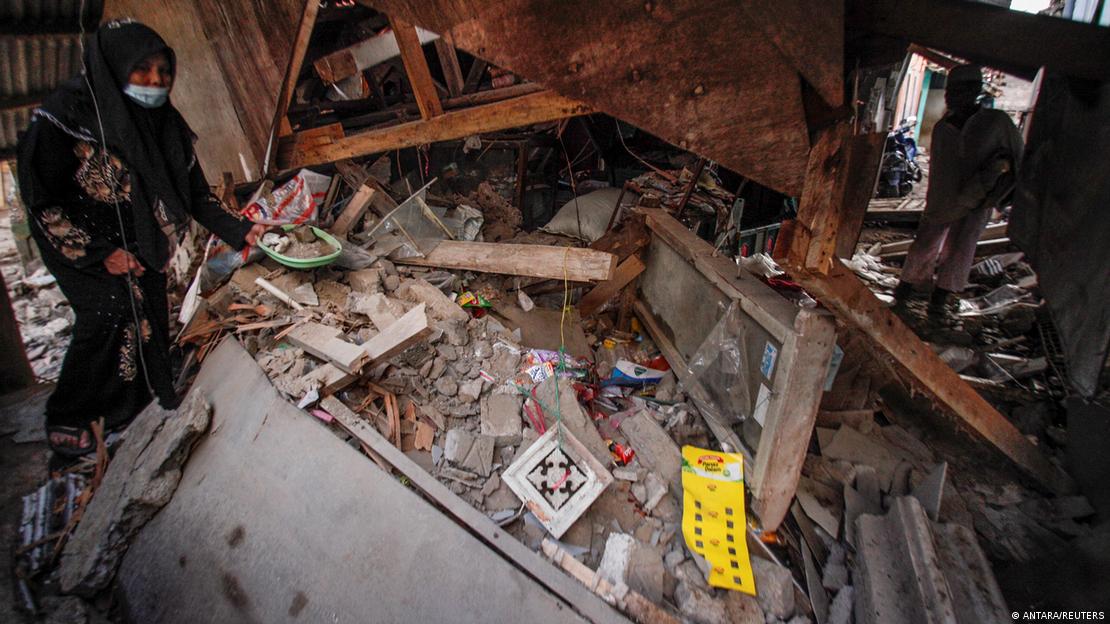 A local woman attempts to collect her belongings from her house in Cianjur after it was destroyed in Monday's earthquakeImage: ANTARA/REUTERS

In Jakarta, some people evacuated offices as buildings started to shake.

"The quake felt so strong. My colleagues and I decided to get out of our office on the ninth floor using the emergency stairs," a worker in South Jakarta told the Associated Press news agency.

Indonesia is situated on the so-called "Ring of Fire" — a region around the rim of the Pacific Basin that is particularly vulnerable to earthquakes and volcanic eruptions.

The country of 270 million is frequently struck by quakes, one of the most recent, in February of this year, killed at least 25 people and injured another 460 in West Sumatra province.