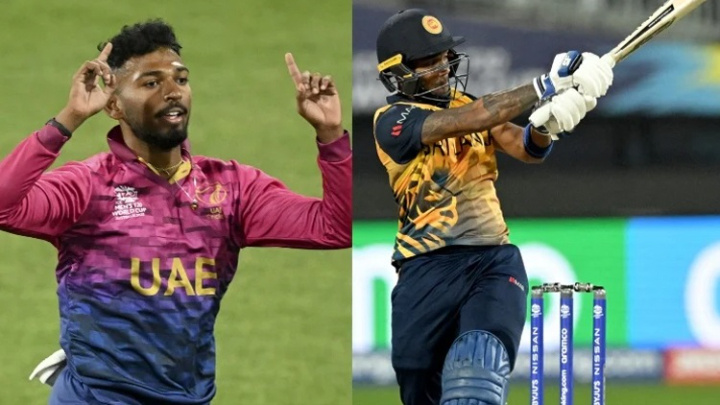 Karthik Meiyappan lit up the Twenty20 World Cup with a hat-trick Tuesday but it was in vain as Sri Lanka crushed the United Arab Emirates to get their campaign back on track, while the Netherlands toppled Namibia.

The Asian champions were stunned by Namibia in the tournament's opening game on Sunday, a crushing 55-run defeat that left no room for error against the UAE.

They responded by bowling out the UAE for 73 for a convincing 79-run victory, but not before some drama.

Sri Lanka were cruising at 117-2 in Geelong when spin bowler Meiyappan derailed their plans in the 15th over, removing Bhanuka Rajapaksa, Charith Asalanka and skipper Dasun Shanaka in successive balls.

It was only the fifth hat-trick at a T20 World Cup, and the first-ever for the UAE in any T20 international.

Shanaka's team recovered to post 152-8 with Pathum Nissanka making a gritty 74 and Meiyappan ending with 3-19.

"Really disappointed with the way we ended the innings (with the bat). We could have scored 180-190," said Shanaka. "But it was important to get a win, we focused on a win only. He (Nissanka) was outstanding."

Earlier, Bas de Leede took two wickets and made an unbeaten 30 as the Netherlands took a giant step towards the Super 12 stage with a tense five-wicket victory over giant-killing Namibia.

It left Group A finely poised heading into the third and final matches on Thursday, where net run rate could prove decisive.

Sri Lanka, the 2014 champions, face the unbeaten Netherlands next, needing another win, while Namibia take on the winless UAE.

After being put into bat, Sri Lanka made a strong start, reaching 42 before Kusal Mendis (18) was trapped lbw by Aryan Lakra.

Nissanka was joined by Dhananjaya de Silva and with the trumpets blowing from the Sri Lankan fans, they both crunched big sixes.

But their 50-run partnership came to an end with an amateurish runout. Nissanka drove the ball and De Silva set off, but his partner did not respond, leaving him stranded.

Nissanka brought up his eighth T20 half-century with a cover shot but then watched as Rajapaksa, Asalanka and Shanaka all fell to Meiyappan.

Nissanka kept calm at the other end and began swinging his bat, before being dismissed in the final over.

Dushmantha Chameera quickly rattled the UAE in their reply, clean bowling Muhammad Waseem and Aryan Lakra in the space of five balls.

The UAE had no answer to the pace attack, slumping to 21-4 in the sixth over and they never recovered as Sri Lanka ran riot.

Chameera ended with 3-15 but hobbled off late in the game.

In the earlier match in Geelong, Namibia were restricted to 121-6, with the Dutch using seven different bowlers to put the clamps on.

The Europeans, boosted by former South Africa and India coach Gary Kirsten on their staff, were cruising at 91-1 in the 14th over in reply before Namibia took four late wickets to set up a nervous finale.

The Netherlands needed six runs off the last over, with De Leede the hero, hitting a boundary and then scoring two to secure the win with three balls left.

"We lost wickets at bad times, we can't afford to do that and we can learn from that as a team," said De Leede.

"But the self-belief has always been there and it's nice to win two tight games. Maybe it opens up a bit more freedom for the boys."