No impact of price reduction on price of soybean oil 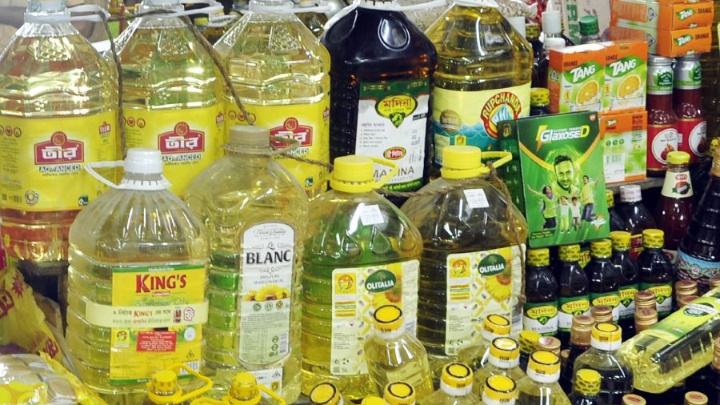 Despite the price reduction declared by the Banaspati Manufacturers Association and Bangladesh Vegetable Oil Refiners, soybean oil is still being sold in kitchen markets at its prior price.

Customers complained that sellers were still charging the same price for cooking oil, despite new supplies of soybean oil still having not reached the market.

While visiting different grocery shops and kitchen markets in Mohammadpur, Mirpur 1, Mirpur 6, Natunbazar and Kuril areas on Wednesday, soybean oil was found to be selling at the previous price.

Different super shops do not have the soybean oil with the newly fixed rate.

Director General of the Directorate of the National Consumer Rights Protection AHM Shafiquzzaman told the Daily Sun that price adjustment of soybean oil is yet to be reflected at the retail level due to a lack of goodwill of traders.

“When government cuts the fuel price, the new rate comes into effect across the country immediately. But private traders are not so eager to reduce the price of edible oil very rapidly,” he said.

Refiners cut the bottled soybean oil price by Tk 14 per litre and loose soybean oil by Tk 17 per litre on October 3. The new rate was scheduled to be effective from October 4.

“Bottled soybean oil price has been reduced to Tk 178 from Tk 185 per litre and loose soybean oil price dropped to Tk 158 from Tk 175 per litre. Prices of a five-litre bottle have come down to Tk 880 from Tk 945,” according to Bangladesh Vegetable Oil Refiners and Vanaspati Manufacturers Association.            Nazmul Islam, a consumer at Mirpur 6 kitchen market, said he could not buy soybean oil at the newly fixed price over the last few days.

He claimed the shop owners increase the price soon after a price hike but do not follow the new rate immediately after a price cut.

Trader, however, said they have nothing to do as they are bound to sell soyabean oil at the price labelled by the company.

The country requires about 20 lakh tonnes of edible oil each year. Only 2.03 lakh tonnes can be sourced from local producers, with the rest met through imports.

Data from the Bangladesh Bank showed that some 5,15,000 tonnes of crude soybean oil was imported last fiscal year, about 75,000 tonnes less than that of the preceding year.