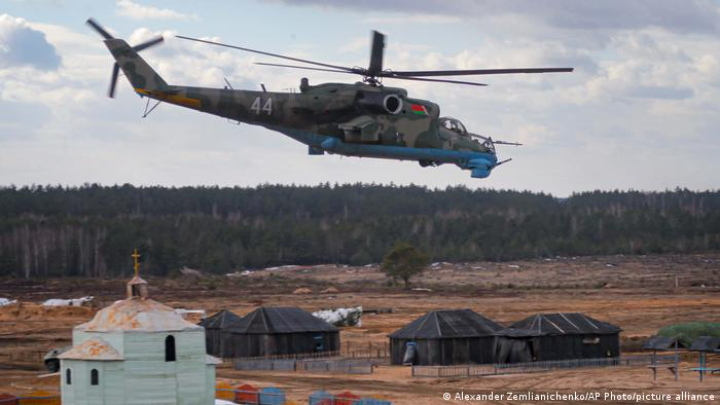 Belarus' Alexander Lukashenko has ordered a joint "regional grouping of troops" with Russia, prompting concerns about further escalation in Russia's war in Ukraine.

Belarusian leader Alexander Lukashenko on Monday announced the formation of a joint unit of Belarusian forces with the Russian army.

Lukashenko said the move was due to growing tensions on Belarus's border with Ukraine, saying it was necessary to bolster security.

The announcement came amid a barrage of Russian missile strikes in several Ukrainian cities, which killed at least 11 people and wounded more than 60 others.

What did the Belarusian leader say?

Lukashenko said he had agreed on the joint deployment with Russian President Vladimir Putin at an informal summit of heads of former Soviet states.

"We have agreed to deploy a regional grouping of the Russian Federation and the Republic of Belarus," he said in quotes carried by state news agency Belta.

The 68-year-old leader did not elaborate on where the troops would be deployed. The formation of these troops started two days ago, he said, and coincided with an explosion on the Kerch Bridge, which links Crimea to Russia.

"Without escalating the situation, I want you to understand: If you want peace, you need to prepare for war. Always," he said.

Kyiv has not claimed responsibility for the blast on the strategically important 12-mile (19-kilometer) Kerch Bridge, but has celebrated it.

What does the deployment mean?

The formation of the joint force has sparked concern that Belarus could be planning a preemptive attack on Ukraine.

Ahead of Russia's invasion of Ukraine on February 24, Belarus allowed Russian troops into the country under the pretext of military exercises. Moscow used the country as a staging post for the invasion of northern Ukraine.  Belarus is reliant both financially and politically on its main ally, Russia.

There have been no indications that Ukraine is preparing an assault on its northern neighbor.

The Belarusian army has some 60,000 people. Minsk deployed 6 battalion-tactical groups, several thousand people, to the border areas earlier this year. The head of Belarus's border guards on Sunday accused Ukraine of provocations at the frontier.