Speaking of a non-communal Bangladesh is inconsistent with BNP leaders: Obaidul Quader 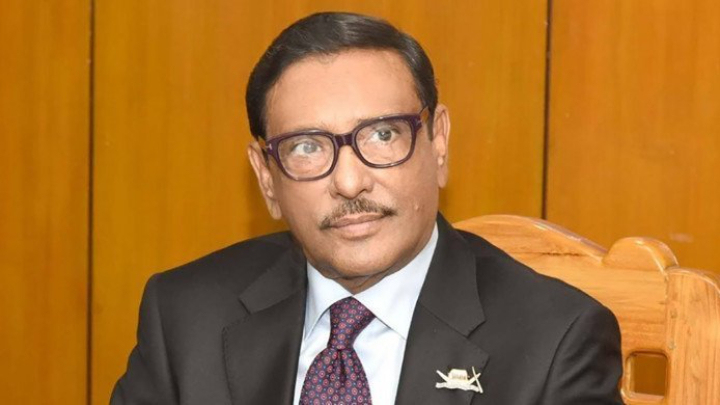 “Speaking of non-communal Bangladesh does not suit those who had started the journey of their politics violating Bangladesh’s democratic values and the great War of Liberation,” he said in a statement.

Quader, also the road transport and bridges minister, said the country’s people know better that BNP is the centre of communal politics.

Whenever the BNP assumed the state power, it patronised the communal evil forces every time, he said.

Condemning and protesting a recent statement of BNP secretary general Mirza Fakhrul Islam Alamgir, the AL general secretary said after the assassination of Father of the Nation Bangabandhu Sheikh Mujibur Rahman and most of his family members on August 15, 1975, BNP founder and military dictator Ziaur Rahman took Bangladesh backward to Pakistani ideology.

He said Bangabandhu restricted religion-centric politics through the 1972 Constitution.

But, Quader said, Zia who seized the state power unconstitutionally amended the Constitution and legalised the misuse of religion in politics.

He said Fakhrul, who is the leader of this party, now talks about non-communal Bangladesh which is nothing but crocodile tears.

The road transport minister said the disguise of Fakhrul for non-communalism and democracy is a mockery with the country’s people.

The democratic rights of the people have been established by the Awami League, he added.

That is why, he said, the AL is doing its best to flourish and maintain democracy in the country.

On the contrary, he said, BNP never cares about the power of commoners and always tries to seize power in undemocratic ways.

Quader said the history testifies that when BNP came to power, Bangladesh turned into a sanctuary of terrorism and militancy.

After assuming power, the BNP established fascist state by sponsoring terrorists and extremist groups, he said.

Apart from carrying out the 21 August grenade attack to oppress the opinion of differences, the AL general secretary said, the BNP institutionalised graft by destroying all democratic institutions and stifling accountability and responsibility.

“And today the BNP is hatching a deep plot to hinder the development and democracy of Bangladesh,” he said.

Quader said Bangladesh is on the highway of development and progress under the leadership of Sheikh Hasina, the daughter of Bangabandhu.

He said the Awami League government, led by Prime Minister Sheikh Hasina, is working sincerely to change the fate of the country’s people.