Indonesia: 129 dead during "riots" at a football game 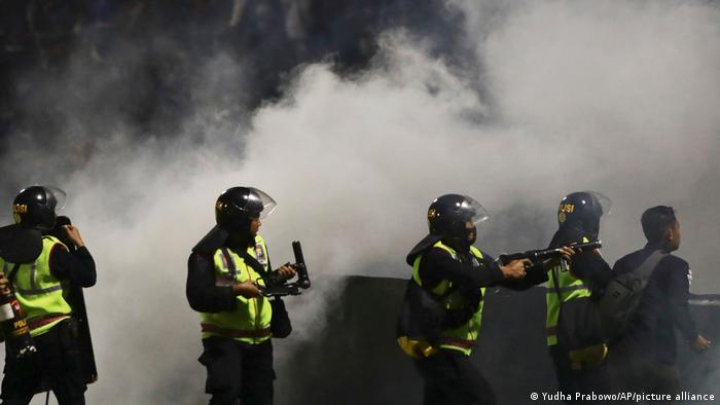 Police said they fired tear gas after clashes broke out between football fans, triggering a stampede. Authorities are considering banning the attendance of spectators after the deadly incident.

Indonesian authorities said on Sunday that at least 129 people, including two police officers, died after violence broke out following a football match in the East Java province.

East Java police chief Nico Afinta said 34 people died in the stadium, and the rest died either on their way to the hospital or at the hospital where they were being treated.

More than 300 people were taken to nearby hospitals for treatment after the unrest Saturday night that police characterized as "riots."

Afinta said he expected the number of deaths to rise since the condition of some people being treated at hospitals was deteriorating.

Indonesian President Joko Widodo ordered authorities to thoroughly reevaluate security at football games and said the incident ought to be the "last soccer tragedy in the nation."

Clashes broke out after angry fans stormed onto the football field after the host team, Arema FC, was defeated in the game Saturday night.

Arema FC lost 3-2 to Persebaya Surabaya, the first loss to their bitter rival in more than two decades.

Both are teams from the East Java province, and the game took place at the Kanjuruhan stadium in the Malang district.

Afinta said police responded to the violence by firing rounds of tear gas into the stands after two police officers were killed.

People panicked and hundreds tried to run out of an exit gate at that time, leading to chaos. 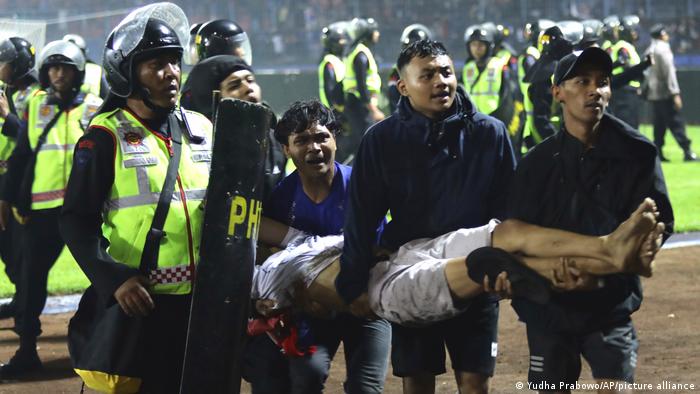 People were carrying injured spectators through the chaos

Some people suffocated, and 34 were trampled to death at the stadium, Afinta said.

The Football Association of Indonesia (PFFI) said it was suspending the football league for a week and launching an investigation into the incident.

Arema FC was also banned from hosting home games for the rest of the season, the PFFI said.

Indonesia's chief security minister, Mahfud MD, said in an Instagram post that 42,000 tickets were issued for the game Saturday when the stadium has a capacity of 38,000 people.

FIFA, the international governing body of football, specifies that firearms or "crowd control gas" cannot be carried or used by stewards or police.

Police officials in East Java are yet to respond to media questions on whether they're aware of the FIFA regulations.

Indonesia's human rights commission is also set to investigate security at the football ground, including the use of tear gas by police officials.

Indonesian Sports Minister Zainudin Amali told reporters he was sorry about the incident and that authorities would reevaluate safety at football matches.

"This is a regrettable incident that injures our football at a time when supporters can watch football matches from the stadium," Amali said.

"We will thoroughly evaluate the organization of the match and the attendance of supporters. Will we return to banning supporters from attending the matches? That is what we will discuss," Amali added.

Afinta, the police chief, said authorities had recommended that the match be attended by Arema FC fans only, given the fierce rivalry between the clubs.