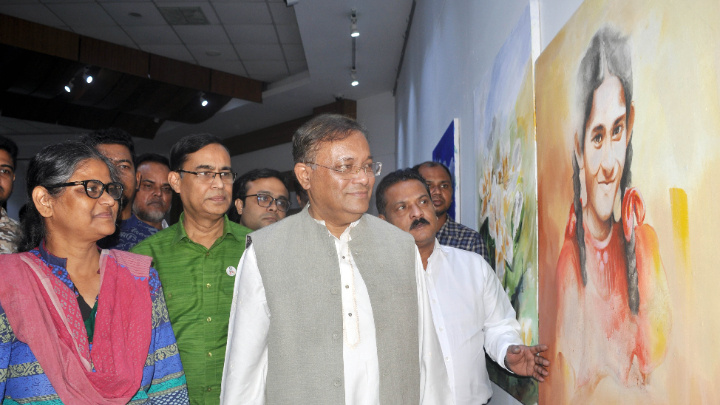 Information and Broadcasting Minister Dr Hasan Mahmud today said Prime Minister Sheikh Hasina is the symbol of democracy, development and the spirit of the Liberation War of Bangladesh.

"Prime Minister Sheikh Hasina is the symbol of women awakening and the progress of women in the global perspective. All development and progress across the country have been possible for the magical leadership of Bangabandhu's daughter," he said.

The minister added: "The persons, who are telling that 'Pakistan was better', have no rights to do politics in the country".

The minister was addressing a roundtable discussion and artwork exhibition at the National Museum in the capital.

Hashumoni'r Pathshala organized the two-day programme marking the 76th birthday of the premier with its president Marufa Akter Popy in the chair.

State Minister for Housing and Public Works Sharif Ahmed addressed the programme as special guest while Bangladesh Biman Airlines Chairman Sajjadul Hassan and National Curriculum and Textbook Board Secretary Nazma Akther Biplobi, among others, addressed it.

Paying rich tribute and greetings to the premier, Hasan said she (Sheikh Hasina) returned home on May 17 in 1981 as the President of Bangladesh Awami League.

"At that time, I was general secretary of Chhatra League college unit. It was raining heavily on that day and we had chanted slogan 'Jhor Bristi Adhar Rate, Sheikh Hasina, Amra Achi Tomar Sathe'. In her speech on that day, she told 'even if I have to face death, I will not back step to fight for the rights of the people of the country. 'After that, she always stands beside the people of Bangladesh despite may adversities," he said.

The minister said ill attempts were made for 19 times to kill Bangabandhu's daughter Prime Minister Sheikh Hasina. But, she didn't get upset, hesitate and didn't stop, he said, adding that she moved forward with more courage for the welfare of the people of the country.

He said democracy of the country was restored under the dynamic leadership of Prime Minister Sheikh Hasina.

The minister said the scenario of the country has changed under the supervision of Prime Minister Sheikh Hasina. The people of the world will hear the story of change of Bangladesh just after five to seven years, said Hasan, also Awami League joint general secretary.

He also wished her (Sheikh Hasina) a healthy and long life.

He said Bangladesh had surpassed Pakistan in all indexes many days ago and the people of Pakistan were also admitting it. But, on the other hand, the BNP's secretary general has claimed that 'Pakistan was better', he added.

He said BNP has become an isolated party and they have realized that the politics of the party is in threat. For this, they are trying to create anarchy across the country and even, they carried out attacks on journalists yesterday at Hazaribagh, he added.

The minister expressed his condemnation of the attack and urged the journalists to be vocal against such ill attempts.

Sharif said Prime Minister Sheikh Hasina has been working relentlessly for the welfare of the countrymen. The all pro-liberation forces should remain in together, he added.

Later, the minister visited the exhibition with other guests.