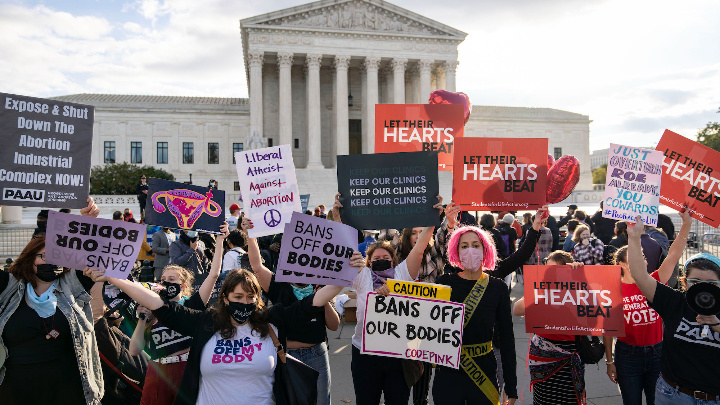 The US Supreme Court (SC)’s decision to strike down Roe v Wade, and with it the fundamental right of women to abort, reflects America’s deepest divisions and will deepen precisely those divisions.

It is a result of both a concerted political movement as well as the uniquely undemocratic nature of the political and electoral system in the United States. And the verdict will have an impact on US law, politics, society and its global profile.

US democracy enables US conservatism

Friday’s judgment is undoubtedly a victory for Republican Party, social conservatives and the country’s Christian Right.

It was a result of twin political efforts.

A bottom-up political, social and religious movement against abortion made large segments of Republican voters almost singularly obsessed with voting for anti-abortion candidates, both for the Presidency and the US Congress. Top-down political choreography then enabled Republican presidents, particularly Donald Trump, and the Republican Senate leadership, particularly Mitch McConnell, to nominate anti-Roe justices on the bench in recent years.

The verdict is also an outcome of the undemocratic nature of America’s political system; this allows minority opinion to shape legislative and judicial outcomes.

The Senate, which confirms the nominees, has two seats from each state in what many consider a violation of the principle of all citizens being politically equal. This allows smaller states, with fewer citizens, in the Midwest and Deep South, home to the anti-abortion sentiment, equal voice in determining who gets to be on a Supreme Court bench, as the pro-abortion larger states, with more citizens, in the east and west. As Trump nominated three judges between 2016 and 2020, the then Senate majority leader, McConnell, was able to use precisely this historically inbuilt design flaw to muster up the majority for the confirmations.

And the verdict is a result of a judicial nomination system which raises serious questions about the independence of the judiciary itself.

With separation of powers and the idea of checks and balances embedded in the American political psyche, the idea of an independent judiciary is sacrosanct. But the nomination process, which rests on executive nominations and legislative confirmations, allows parties to select candidates not for their understanding of the law and authority over jurisprudence but where they stand on the culture issues at the heart of their value system.

Justices then have lifelong tenure, which was again supposedly a way to ensure they would remain insulated from any kind of pressure and not be vulnerable to inducements. But this also means that secure in their tenure, judges can act in a manner that may or may not conform to constitutional values or their own commitments to the Senate Judiciary Committee. Indeed, many of the conservative judges promised not to overturn the established precedent during their confirmation hearings, but switched track as soon as the balance of power in the court changed and an opportunity arose to erode rights. It also allows them to be inconsistent in their jurisprudence without any accountability. Indeed, on Thursday, the court dealt a blow to state rights when it struck down a New York law requiring special permits to carry guns in public; on Friday, it made state rights a fundamental principle in overturning the national legal right to abortion.

All of this then results in a combination of partisan judges, appointed through a partisan process, who are then given lifetime security to do what they wish without any countervailing pressure, in a deeply polarised climate.

These three factors — a flawed electoral system which doesn’t give citizens equal voice and disproportionately ends up favouring conservatives; a broken judicial nomination system which throws up judges whose ideological beliefs rather than constitutional judgment is often the fundamental criteria for nomination; and a concerted and focused Republican campaign on the issue, through grassroots activism and political machinations — explains why abortion today is no longer a legal right in America, despite most Americans supporting the right to abort. Flawed US democracy has enabled US illiberalism.

The verdict will now shape American law, politics and place in the world.

America today is legally Balkanised. Nine states have already banned abortion, with many not even making exceptions even in cases of rape and incest. Another 10 are on their way to ban abortion or severely circumscribe it. These are largely states in the Midwest and Deep South. On the other hand, states on the coasts and run by Democrats, are expanding abortion-related protections while the administration has rolled out executive action to ensure that the right of women to travel from states where abortion is banned to those states where it is available is not curtailed, neither is their access to medication. The social and political divisions of America are now reflected in law, a throwback to the era when south and north battled over the legal architecture on slavery.

The legal system is also preparing for a new avalanche of cases, prompted by Justice Clarence Thomas’s opinion that right to access contraception, to have same sex relationships or enter into same sex marriages — all located within the right to privacy — should now be up for question. This may not necessarily happen, for even among the majority bench which overturned Roe v Wade, there are differences on whether to erode other rights. But Republicans and the Christian Right, emboldened after their legal victory, are sure to make a push for the erosion of other rights that they deem as offensive to their cultural and religious sensibilities. On the other hand, Democrats, women, sexual minorities, human rights groups will do all they can to preserve these rights.

Politically, the impact of the verdict is uncertain. Even as Republicans celebrate it, there is a sense in party circles that this will potentially erode their prospects in the coming mid-term elections, especially in swing districts and among swing voters, especially suburban women.

Democrats, who are under political siege due to a President perceived to be weak and rising inflation, see it as a rare moment when their values and electoral interests converge and have reoriented their campaign to focus on abortion. The Democratic message is simple — vote for Senators and Congressional representatives who are for abortion, for that is the only way to push through a federal law to offset the judicial verdict. It may not be enough to reverse the expected Democratic losses in the elections this November, but abortion will be on the ballot. The verdict has opened up a new era of political contestation on the issue, and this time, for once, Democrats are on the offensive on a culture war issue.

And finally, the abortion verdict undermines America’s place in the world, its moral high ground of being the beacon of freedom, and reinforces the belief of allies, partners, friends and adversaries that the country is broken.

This will manifest itself in two ways. Even as Joe Biden frames the current geopolitical moment as a battle between democracies and autocracies, and his administration seeks to prioritise values and human rights, America’s domestic story and growing illiberalism will weaken its ability to push these values globally. To be fair, American officials often acknowledge that their own democracy needs work. But the domestic battle to preserve it today is today far more pressing than it was at any point in recent history. Add to this the fact that even a democratic principle as basic as peaceful transfer of power after elections is today up for debate in the country and what comes across as US’s sermons on democracy and human rights sounds increasingly hollow.

The court verdict will also make other countries think hard about whether betting on America under Biden is a sustainable proposition. The President often says that when he went to his first G7 meeting in United Kingdom last year, and said America was back after the Trump years, other leaders asked, “For how long?”.

The court verdict, a conservative victory, will make other countries recognise that the Democratic administration and its value system is fragile. Trump has gone for now, but Trumpism is very much here to stay in America. Illiberalism is getting institutionalised in law. And there may well be the return of an emboldened Right to power both on the Hill and in the White House in two years. Each country will then have to think hard about how to protect its interests in the face of a divided and broken America at war with itself.
Hindustan Times