The NASA DART mission, which aims to divert an asteroid, is a test 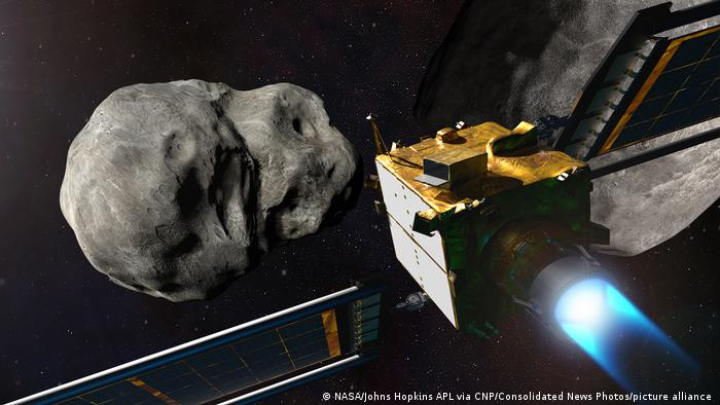 When NASA's DART spacecraft crashes into the asteroid Dimorphos, it will mark the first time humanity has deflected an object in space. It's a test to see how we'd defend Earth against asteroid impacts.

NASA will make its first attempt to crash into an asteroid on September 26 or September 27, depending on where you live in the world.

The collision will mark the end of the DART mission, a 10-month space journey to autonomously deflect a non-hazardous asteroid. But it will also be the start of masses of new data in what scientists call "planetary defense."

Test mission to deflect an asteroid

"This is just a test," said Nancy Chabot, the DART coordination lead at Johns Hopkins Applied Physics Laboratory during a press briefing on September 15. "This asteroid is not a threat to the Earth. In fact, there are no known asteroid threats to the Earth for the foreseeable future."

There are still asteroids that scientists have yet to find. But Chabot said they wanted to do this test now "to be ready for when we might potentially need it."

The DART spacecraft launched on November 24, 2021, on a 10-month "cruise" toward the pair of asteroids called Dimorphos and Didymos.

Dimorphos will be about 11 million kilometers (6.8 million miles) from Earth at the time of DART's impact.

As DART gets closer and closer to the asteroid, we will be able to see a stream of live images. Then at the time of impact, another, Italian-made spacecraft, called LICIACube, will film the impact from the side.

"Crashing this small spacecraft [DART] into a much larger asteroid is only going to cause a small change in how Dimorphos goes around Didymos. The change will only be about 1%. That makes this a very safe and efficient way to do this test." 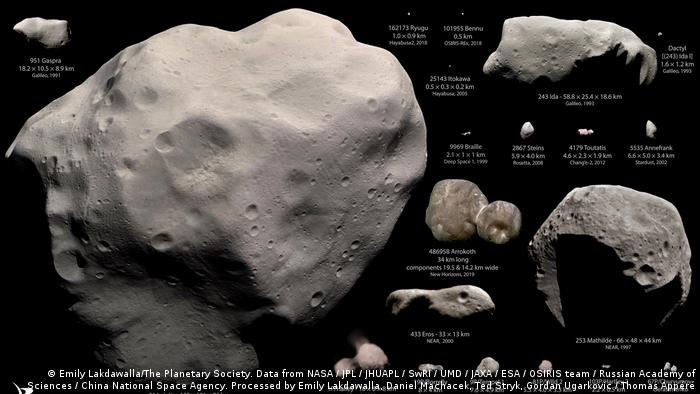 Space agency missions have visited a number of asteroids and comets

The DART mission won't distinguish between the two asteroids until the final hour before impact. It will use images from an onboard camera to autonomously identify Didymos and Dimorphos and then — also autonomously — fire thrusters to make sure it stays on an "intercept course with Dimorphos."

"These algorithms are [among the main technologies] being demonstrated by DART," said Chabot.

They are called SMART Nav and were developed at the Johns Hopkins Applied Physics Laboratory.

"It's autonomous navigation that uses these images to ensure you can target a small asteroid in space, accurately, and it's one of the main challenges," said Chabot.

These very same images will be streaming back to Earth at one per second and shown live on a NASA broadcast.

How big is the threat from asteroids for Earth?

The asteroid that wiped out the dinosaurs was about 10 kilometers (6.2 miles) in size.

"That sort of asteroid changed the whole planet, but we don't know of any asteroid of that size today," said Thomas Zurbuchen, associate administrator at NASA's Science Mission Directorate, in an interview with DW in November 2021.

"If a 160-meter asteroid [like Dimorphos] hits a city, it will a bad day for that city, leaving a crater of more than a kilometer, but it won't change the whole planet" he said.

However, Zurbuchen said bombardments by smaller asteroids are a much bigger threat to life on Earth.

"We've had a similar bombardment from asteroids over millions of years, but you just don't see it because we have such an active geology on Earth," Zurbuchen said.

DART will be the first test of future planetary defense against asteroid bombardments.

The European Space Agency said Dimorphos will be the first object in the solar system to have its orbit shifted by human effort in a measurable way.

ESA is looking ahead to its own mission to study Dimorphos up close. It will use a spacecraft called HERA, which is planned for launch in 2024.

WHY WE FLY BY PLANETS, MOONS AND ASTEROIDS

Flybys? Nothing new. But two flybys of the same planet a day apart? That's special. In a first for space, two probes flew by Venus in August — BepiColombo, headed for Mercury, and Solar Orbiter on its way to the sun. They wouldn't make it to their goals without flybys and gravity assists. Sadly, these two didn't snap each other. They were 575,000 kilometers (357,000 miles) apart!

BepiColombo took this cool image of Venus. But the shot is secondary. The probe flew by Venus to help it slow down. It needs to match its "orbital energy" with Mercury's to get into that planet's orbit. Bepi started out with Earth's (greater) orbital energy and is trading off the excess. Simply put, it's giving it to Venus, and it's being assisted by gravity ― a slingshot, planetary swingby.

Voyagers beyond the edge

Launched in 1977, the Voyager 1 & 2 spacecraft were sent out to explore the outer solar system. They each carry a Golden Record of Earth sounds: Our story told for aliens. Flybys include Jupiter, where V1 snapped the Great Red Spot (storm raging for hundreds of years), Saturn, Uranus and Neptune. They are now beyond our solar system in interstellar space and thus the "farthest human-made objects."

People often speak of our solitary, cheesy moon with a sense of love and wonder. And why not? It wouldn't be the same if we had a mass of 79 moons like Jupiter. Voyager 2 discovered one of them (plus five at Neptune). It also discovered that Jupiter's moon Europa may host some form of life beyond Earth. We're intrigued by its salty oceans. NASA wants to find out more with its probe Europa Clipper.

Crash and burn… in glory

If you think 79 moons is cool, try 82. That's Saturn for you. The Cassini spacecraft was a joint American and European mission to probe Saturn and its moons. It featured 162 targeted flybys of Saturn's moons, including Titan and Enceladus, where it found ocean worlds. After 13 years exploring the planetary system, Cassini took one final dive into Saturn, filing observations until the very end.

Voyagers 1 & 2 have company at the edge of our solar system: New Horizons. Having swung past Jupiter for a gravity boost, it did a six-month flyby to study the dwarf planet Pluto. It then ventured to the Kuiper Belt, where it captured Voyager 1 on camera. Pioneers 10 and 11 are the only other probes to have gone this far. These missions help us answer questions about the geology and life in space.

There are many other notable flyby missions — Rosetta, which did Earth and Mars flybys before heading to comet Chury, Giotto at Halley's comet, Deep Space 1, Deep Impact, Stardust, the first sample return mission to a comet… And in the future: Hera, which will be humankind’s first probe to rendezvous with a binary asteroid system, Didymos. Why? It's all about who and where we are in the universe.