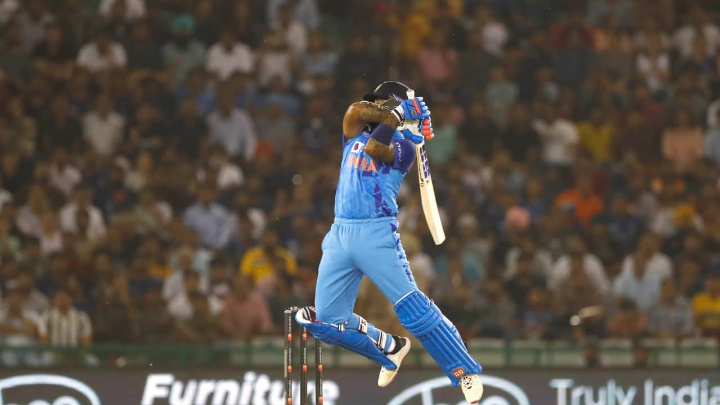 Half-centuries from Suryakumar Yadav and Virat Kohli trumped fifties from Cameron Green and Tim David as India chased down 187 and clinched the series 2-1 in front of a sell-out crowd in Hyderabad.

Suryakumar got together with Kohli after Daniel Sams and Pat Cummins had bounced out KL Rahul and Rohit Sharma respectively. Whenever the bowlers hit the Hyderabad pitch hard, the ball either kicked up or stopped on the batters. Case in point: the first ball to Suryakumar, from Cummins, reared up from a back of a length and zipped away past his outside edge. Suryakumar, however, rose above the conditions and Australia's attack, proving a potent point of difference in India's line-up. He struck up a 104-run partnership off 62 balls with Kohli and disrupted the bowlers by manufacturing swinging room or jumping out of the crease. After Suryakumar ultimately fell for 69 off 36 balls, with India 53 away from victory, Australia staged a mini-fightback and dragged the game down to the last over in which the hosts needed 11. Kohli shovelled the first ball from Sams over long-on and holed out next ball for 63 off 48 balls. Dinesh Karthik and Hardik Pandya, though, got the job done for India with one ball to spare.

Green's top-order salvo
With the new ball sliding onto the bat, Green immediately teed off in the powerplay, muscling his way to a 19-ball fifty in the fifth over. Much like Suryakumar, Green often backed away outside leg and lustily swung at the ball. Only David Warner and Glenn Maxwell have hit faster fifties for Australia in T20Is. Green was responsible for 52 off the 66 runs Australia had scored in the powerplay. He once again unfurled his range against spin when he cracked Axar Patel for three successive fours in the fourth over, with the pick of those being a hard, flat sweep to the midwicket boundary. Bhuvneshwar Kumar, who had conceded 12 runs in his first over, however, returned to the attack in the next over and hid one away from his reach to have Green caught at backward point for 52 off 21 balls.

Axar steps up once again
After being picked apart by Green, Axar got his arm ball fizzing against Maxwell and varied his pace well to make it even more effective. He had already dismissed Aaron Finch for 7 and claimed 1 for 31 in his three overs in the powerplay. Axar then returned to the attack with a double-wicket 14th over. He had Josh Inglis lobbing a catch to backward point and drew a return catch from Matthew Wade. Axar went over the wicket to the left-handed Wade, got a shortish ball into the pitch and had him spooning a punch back to him. Axar ended the series with figures of 8 for 63 in ten overs at an economy rate of 6.30. No other bowler got more than three wickets in the series.

David's end-overs bash
That Australia reached 186 for 7 from 117 for 6 was largely down to David's big-hitting. In his first international series for Australia, David showed why he is in demand in franchise T20 leagues. Despite India posting fielders at both long-on and long-off for the most part, David took 27 of his 54 runs down the ground with Kieron Pollard-esque blows. When Bhuvneshwar marginally missed his yorker, David took him for 6, 6, 4 in the 18th over. Jasprit Bumrah, too, couldn't control the damage, finishing with 0 for 50 - the most he has conceded in a T20I.

The Suryakumar-Kohli show
India lost both their openers within four overs, but Suryakumar and Kohli quickly changed the mood and tempo of the chase. Both batters were proactive against legspinner Adam Zampa, using their feet and hitting him against the intended turn for sixes. Zampa could've cut Kohli's innings short at 23 had he hung onto a tough return catch. Suryakumar soon overtook Kohli and surged to a 29-ball fifty. He then hit two sixes and a four off his next five balls and threatened to rush India home. Hazlewood and co. though applied the brakes and made India work hard for victory. India managed only one four and a six between overs 16 and 19, but Suryakumar's early assault ensured the chase was always within their grasp.