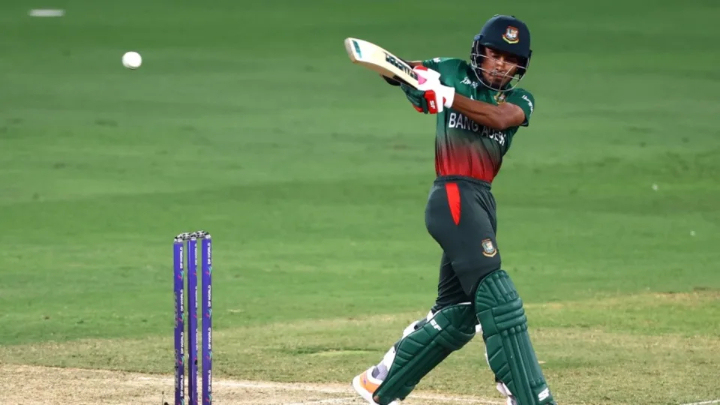 Afif Hossain and Mehidy Hasan Miraz led Bangladesh out of trouble an occasion each as they beat UAE by seven runs in the first T20I in Dubai. In front of a sparse crowd mostly made up of expat Bangladeshis, the visitors picked up their first T20I win in the country.

After being put in, Bangladesh recovered from 47 for 4, then withstood Chirag Suri's fiery start with the bat, before 16-year-old debutant Aayan Khan gave them a final scare in the last three overs of the 159-run chase.

Afif top-scored with an unbeaten 77 while Miraz took three wickets and two superb catches, one of his own bowling, before Shoriful Islam's two wickets in the last over sealed the game for Bangladesh.

Opening woes continue for Bangladesh
Sabbir Rahman and Miraz walking out to open the innings for Bangladesh laid to rest all the speculation about the opening pair since their curtailed training camp in Dhaka a couple of weeks ago.

Their stand, however, lasted just nine balls when Sabbir struck Sabir Ali down to Basil Hameed at deep square leg. Miraz also didn't look too comfortable, falling for 12 off 14 balls with two fours, top-edging one back to the fast bowler Zawar Farid in the fifth over.

In between, the returning Litton Das also fell for 13, although he did start with a lot of intent, hitting three boundaries.

Meiyappan's double-strike
Bangladesh got into further trouble when legspinner Karthik Meiyappan removed Yasir Ali with his first ball. The delivery held its line, sending the visitors into a tail-spin at 47 for 4 in the eighth over. Meiyappan has been a revelation since his debut last year, having now taken 16 wickets in ten T20Is. When he lured Mosaddek Hossain out of the crease, and had him stumped for three, it looked like UAE were on the ascendancy.

Afif to the rescue, again
Afif, though, stood firm amid a flurry of wickets. He has already been Bangladesh's leading run-scorer in T20Is this year, so there was a bit of consistency expected of him. He dominated the 30-run stand for the fifth wicket with Mosaddek, before adding 81 in an unbroken stand with captain Nurul Hasan.

Luck was also on Afif's side. He was dropped at deep square leg twice, on 2 and 63. But he struck the ball well through the leg side, regularly hitting it behind square, which seems to be one of his favoured areas this year. He missed a few scoops and ramps, and the straighter bat shots yielded more runs. He finished with three sixes and seven fours - Bangladesh will be happy that they have at one batter who is showing good form.

Suri lights up UAE's chase
Suri started with a boundary spree but Bangladesh had a lucky break in the middle. In the fifth over, a shot from Suri brushed bowler Shoriful's fingers on its way to the stumps at the non-striker's end to find Muhammad Waseem out of his crease. Waseem had struck a four and a six in his run-a-ball 15, but the home side needed a harder push.

Suri then struck the ball brilliantly against Mustafizur Rahman in the last over of the powerplay. He timed the ball behind square on the off side for two fours before adding a third with a swivelled pull when Mustafizur came around the wicket. The 14-run over took UAE to 43 for 1 after six overs.

Miraz comes to the party
The chasing, however, fell flat when Miraz got into the act. He had Suri stumped in the eighth over for 39 off 24 balls. In his next over, he had the dangerous Aryan Lakra for 19.

After that, it was the turn of Miraz the fielder. UAE captain CP Rizwan tried to crack Mustafizur through point, but Miraz dived to his left to complete an excellent catch. Shoriful then removed Basil Hameed, before Miraz took his second brilliant catch of the game. Off his own bowling, he dived full length, once again to his left, to intercept Vriitya Aravind's leading edge.

Aayan's near miss
Afif ran out Farid with a direct hit from deep before Mustafizur bowled Meiyappan in the 17th over. At that point, UAE required 35 from three overs with just two wickets in hand. It looked like the game was all but over before young Aayan struck three fours in the next two overs. He and Junaid Siddique took 14 and 10 off the 18th and 19th over respectively, which also featured Mosaddek dropping a sitter in the deep. Mohammad Saifuddin dropped an even easier chance at cover, but both fielders redeemed themselves by taking a catch each to complete the win.