‘What happened in Pakistan will not stay in Pakistan,’ flood-ravaged country warns UN 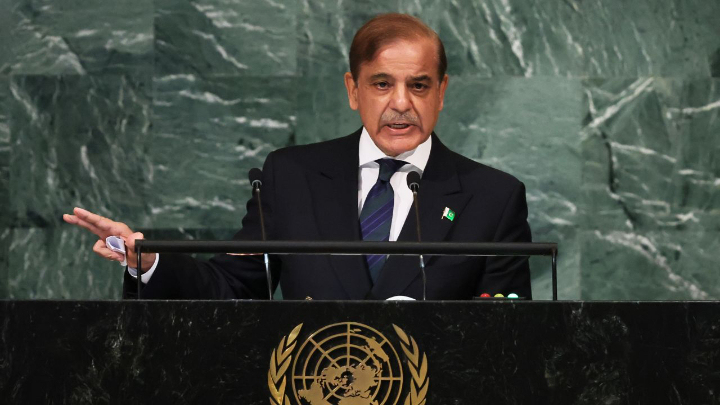 Pakistan’s Prime Minister Shehbaz Sharif has warned that climate change will not spare other countries the sort of disaster that left up to one third of his country underwater and millions of its children at risk of water-borne diseases.

He told the United Nations General Assembly on Friday to come together and “act now” before it’s too late.

“One thing is very clear, what happened in Pakistan will not stay in Pakistan,” Sharif told world leaders.

“For 40 days and 40 nights, a biblical flood poured down, smashing centuries of weather records, challenging everything we knew about disaster and how to manage it,” Sharif said.

He went on to give first-hand detail of the scale and magnitude of the catastrophe facing his country, where floods caused by record monsoon rains and melting glaciers have killed more than 1,600 people since June.

Sharif said swaths of the country are “still underwater, submerged in an ocean of human suffering.”

Flood victims line up up to receive food aid at Dera Allah Yar town of Jaffarabad district in Balochistan province on September 17, 2022.

“In this ground zero of climate change, 33 million people, including women and children, are now at high risk from health hazards,” he said.

Authorities have warned it could take up to six months for the flood waters to recede in the country’s hardest-hit areas, as fears rise over the threat posed by waterborne diseases including cholera and dengue.

The deluge has left 3.4 million children in need of “immediate, lifesaving support,” according to UNICEF, leaving them vulnerable to contracting water-borne diseases, including dengue fever and malaria.

“The undeniable and inconvenient truth is that this calamity has not been triggered by anything we have done,” he said.

Pakistan is responsible for less than 1% of the world’s planet-warming gases, European Union data shows, yet it is the eighth most vulnerable nation to the climate crisis, according to the Global Climate Risk Index.

It’s paying a hefty price, not only with lives but destroyed schools, homes and bridges.

Sharif said life in Pakistan has changed forever and feared that the country will be “left alone high and dry to cope with the crisis which we did not create.”

He explained that it was “entirely reasonable” to expect some approximation of justice for this loss and damage, warning that “clearly the time for talk about action has passed.”

The country’s National Disaster Management Authority says that among the 1,606 deaths recorded so far, 579 are children.

Sharif told the UN in addition to the lives lost, a million homes have been destroyed and another million damaged. He also said that more than a million farm animals have been killed and four million acres of crops have washed away.

He said he is “fully committed” to rebuilding Pakistan but warned other countries to focus on the future which includes combating climate change.

“It is high time we took a pause from the preoccupations of the 20th century to return to the challenges of the 21st century,” Sharif said.

“The entire definition of national security has changed today. And unless the leaders of the world come together to act and act now on an agreed common agenda, there will be no earth to fight wars over. Nature will be fighting back. And for that, humanity is no match at all.”