Rahima Begum's daughter claims that she was kidnapped; however, police say she went into hiding 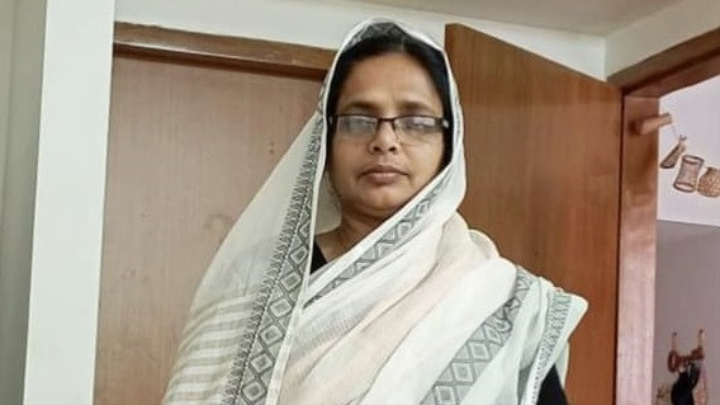 Police have found a Khulna woman, who had been said to be missing by her family and presumed dead, alive from Faridpur after 28 days.

Rahima Begum, 55, had been missing from Uttar Banikpara in Khulna since 27 August last month, said her daughter Mariam Mannan. She later claimed that her mother had been kidnapped. They alleged that their mother was kidnapped because of a land dispute she had with some locals.  However, police said that Rahima went into hiding herself.

"Rahima Begum was rescued from Syedpur village of Boalmari upazila around 10:3 pm. She is being sent to Khulna," said Boalmari Police Station Officer-In-Charge (OC) Abdul Wahab.

Later, one of Rahima Begum's daughters, Adri Akhter, 22, filed a case with the police facility accusing some people. Police have arrested six people in the case so far.

On September 14, a court ordered to transfer the case to the Police Bureau of Investigation (PBI). The PBI then accepted the documents on 17 September, following due process. PBI Inspector Abdul Mannan was given the charge to investigate the case.

On Friday (23 September), three daughters of Rahima Begum, including Mariam, claimed that the body of a woman which was recovered 12 days ago in Mymensingh was their mother's.

"My mother has been missing for 27 days. We are constantly looking for our mother. In the meantime, we have come here after receiving the news of the recovery of the body of an unidentified woman at Phulpur police station on 10 September. Apart from salwar-kameez, the forehead and hands in the picture seemed to be my mother," Mariam said.

However, Mariam was informed by the police that it is not possible to confirm the identity of the body without a DNA test.

"Mariam's mother is 55 years old. The decomposing body we recovered appears to be approximately 28 to 32 years old. Considering these aspects, the body cannot be confirmed as her mother's," Phulpur Police Station Inspector (Investigation) Abdul Motaleb Chowdhury said on Friday.

"On 10 September, around 11am, the body was recovered from Purbapara village of Baola union of the upazila. The identity of the dead body could not be identified and it was buried on 12 September after the post-mortem at the Mymensingh Medical College Hospital morgue. Evidence required for DNA test has also been preserved. Mariam Mannan claimed that the body belonged to her mother Rahima but could not prove it for sure. Maryam's DNA test is required to finally identify the body," Phulpur Police Station Officer-in-Charge (OC) Abdullah Al Mamun said.