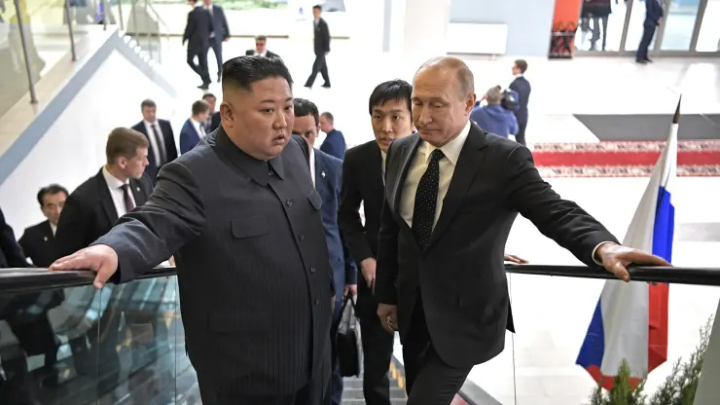 North Korea says it hasn’t exported any weapons to Russia during the war in Ukraine and has no plans to do so, and said U.S. intelligence reports of weapons transfers were an attempt to tarnish North Korea’s image.

In a state media report Thursday, an unnamed North Korean defense official told the U.S. to stop making “reckless remarks” and to “keep its mouth shut.” Biden administration officials earlier this month confirmed a declassified U.S. intelligence assessment that Russia was in the process of purchasing arms from North Korea, including millions of artillery shells and rockets, as Moscow attempts to ease severe supply shortages in Ukraine worsened by U.S.-led export controls and sanctions.

The North Korean official stressed that Pyongyang has never recognized the “unlawful” U.N. Security Council sanctions against the country “cooked up by the U.S. and its vassal forces.” The official said the export and import of military equipment is a “lawful right peculiar to a sovereign state,” according to an English translation of the statement published by the North’s official Korean Central News Agency.

“But we take this opportunity to make clear one thing. We have never exported weapons or ammunition to Russia before and we will not plan to export them,” said the official, who was described as a vice director general of the National Defense Ministry’s general equipment bureau.

“It is not sure from where the rumor originated which the U.S. is spreading, but it is aimed at tarnishing the DPRK’s image,” the official said, referring to the country’s formal name, the Democratic People’s Republic of Korea.

Facing sanctions and export controls, Russia in August bought Iranian-made drones that U.S. officials said had technical problems. Experts say North Korea, if willing, could become a major source of small arms, artillery and other ammunition for Russia, considering the compatibility of their defense systems based on Soviet roots.

North Korea has sought to tighten relations with Russia even as most of Europe and the West has pulled away, blaming the U.S. for the crisis and decrying the West’s “hegemonic policy” as justifying military action by Russia in Ukraine to protect itself.

North Korea also has used the war as a window to accelerate its own arms development, testing dozens of weapons including its first long-range missiles since 2017, exploiting a divide in the U.N. Security Council, where Russia and China have blocked U.S. attempts to tighten sanctions on Pyongyang.

The North Korean government has also hinted it is interested in sending construction workers to help rebuild pro-Russia breakaway regions in Ukraine’s east. In July, North Korea became the only nation aside from Russia and Syria to recognize the independence of the territories, Donetsk and Luhansk.