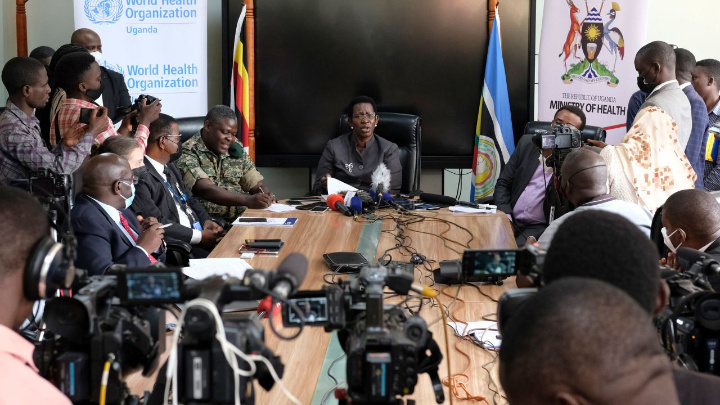 Permanent Secretary of the Ministry of Health Diana Atwine, center, confirms a case of Ebola in the country, at a press conference in Kampala, Uganda Tuesday, Sept. 20, 2022.

Uganda declared an outbreak of Ebola after a case of the relatively rare Sudan strain was confirmed in the country, the World Health Organization (WHO) said on Tuesday.

The WHO’s Africa office said in a statement the case was confirmed after testing a sample from a 24-year-old man in the country’s Mubende district.

“There are currently eight suspected cases who are receiving care in a health facility,” WHO Africa said, adding that it is helping Uganda’s health authorities with the investigation and deploying staff to the affected area.

“This is the first time in more than a decade that Uganda is recording the Ebola Sudan strain,” Dr. Matshidiso Moeti, WHO Regional Director for Africa said. “We are working closely with the national health authorities to investigate the source of this outbreak.”

Uganda last reported an outbreak of Ebola Sudan in 2012, the WHO said. At least 17 people were killed from the 24 cases identified in that outbreak, according to the Centers for Disease Control and Prevention, which contributed to containing the virus in the east African country at the time.

Uganda has experienced four Ebola outbreaks, according to the WHO, with the most deadly witnessed in 2000 which left over 200 people dead.

Uganda borders the Democratic Republic of the Congo which is experiencing an Ebola resurgence following outbreaks this year.

Uganda’s last outbreak was in 2019 when it confirmed the Zaire Ebola strain, which led to the death a of 9-year-old Congolese girl near the border with the DRC.

According to the WHO, vaccination has been approved against the Zaire strain but inoculation against the Sudan strain hasn’t been tested.