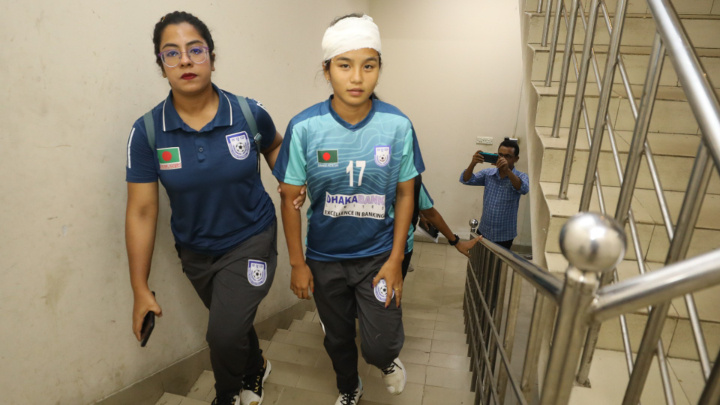 An utter shock amid the euphoria of joyride.

Bangladesh's SAFF winning women's team midfielder Rituporna Chakma got injured during their open bus parade from airport to BFF house. But, no big trouble occurred and the player is safe.

BFF's executive Imran informed, while passing the foot overbridge of Banani, Rituporna got hit by a wooden or steel material and her forehead started to bleed.

Immediately the bus was stopped and Rituparna was rushed to CMH through an ambulance that was part of the rally. She needed three stitches, he added.

As no more complications were found, she was released after the treatment and she started toward BFF house through the ambulance.

The SAFF winning team arrived at the Shahjalal Airport on 1:45 pm today.

An open bus parade carried them from there, which is headed towards BFF via Kakoli, Jahangir Gate, PM office, Bijoy Sarani, Tejgaon, Mouchak, Kakrail, Arambagh and Mothijheel Shapla Chattor.