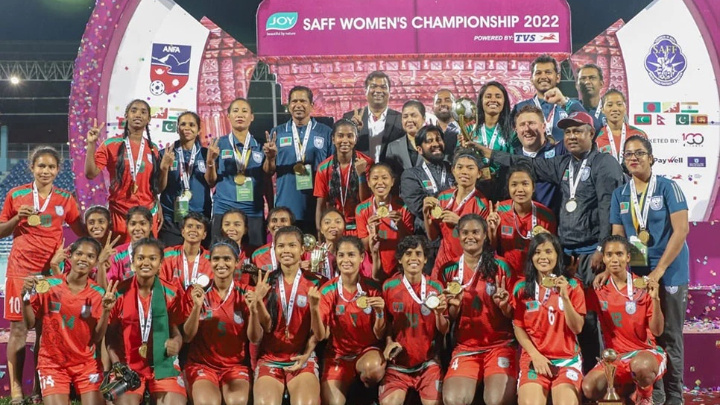 Bangladesh women's football team, which emerged as the new champions in the seven-nation SAFF Women's Championship with an all-win record, reached Dhaka.

State Minister for Youth and Sports Zahid Ahsan Russell MP received the country's heroines on behalf of the millions of soccer crazy fans.

The Tigresses earned the dream SAFF Women's title for the first time beating five times runners up and hosts Nepal 3-1 in the final in Kathmandu Monday evening.

The Bangladesh women's team won their maiden SAFF crown breaking the domination of India, which had won all five of the previous regional meets.

Members of the women's team will also address the press shortly at the airport.

The open deck bus will be equipped with sound system and sports related songs will be played during the journey.

A BRTC double decker bus was prepared for the job with an open roof removing some seats of the top floor. The reshaping was completed on Tuesday night and the bus was decorated with images of proud women's footballers.

Bangladesh for the first time, celebrated the coveted SAFF trophy winning all five of their matches of the just concluded SAFF Women's Championship, scoring 23 goals in the process and conceding just one.