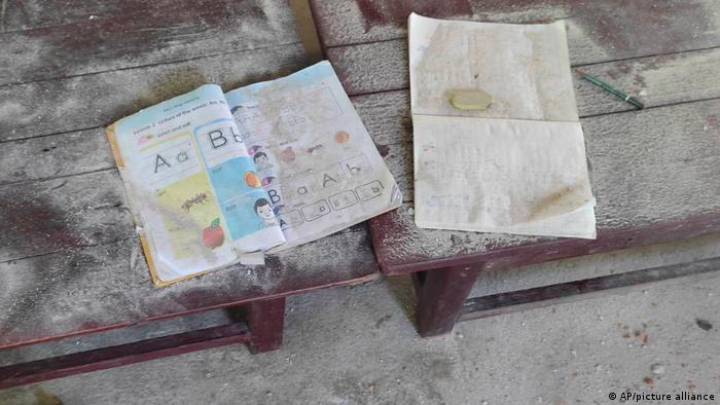 A school was attacked in north-central Myanmar

At least six children were among those killed in a village in the north of the country. Myanmar has been gripped by violence since the military ousted the elected government of Aung San Suu Kyi.

Government helicopters attacked a school and a village in Myanmar, killing more than a dozen people, including at least six children, said witnesses Monday.

At least 17 other people were injured when army helicopters shot at a school in north-central Myanmar. The military said it opened fire because rebels were using the building to attack its forces.

The incident occurred last Friday in the village of Let Yet Kone in the central Sagaing region, the details of which emerged on Monday via a school administrator and an aid worker.

The school administrator told news agency AP that she had been trying to get children to safety when government Mi-35 gunships opened fire on the school.

"Since the students had done nothing wrong, I never thought that they would be brutally shot with machine guns," she said. "They kept shooting into the compound from the air for an hour. They didn't even stop for one minute. All we could do at that time was chant Buddhist mantras."

State media outlets reported on the attack the following day, claiming government forces had gone to the village to perform a "surprise inspection" after receiving reports that members of the People's Defense Force (PDF) —which the ruling Myanmar junta labels "terrorists" — and allies from the Kachin Independence Army (KIA) were hiding in the school and adjacent monastery when they opened fire on government security forces.

Though the government acknowledged injuries, claiming the PDF and KIA used villagers as human shields, it made no mention of the children.

Violence has been commonplace across Myanmar since the military seized power from an elected government in February 2021. Opposition movements, some of them armed, have since emerged across the country, which the military has tried to counter with lethal aggression.

However, the number of youngsters killed in the air attack in the Sagaing region appeared to be the highest since the army seized power when they ousted the elected government of Aung San Suu Kyi last year.