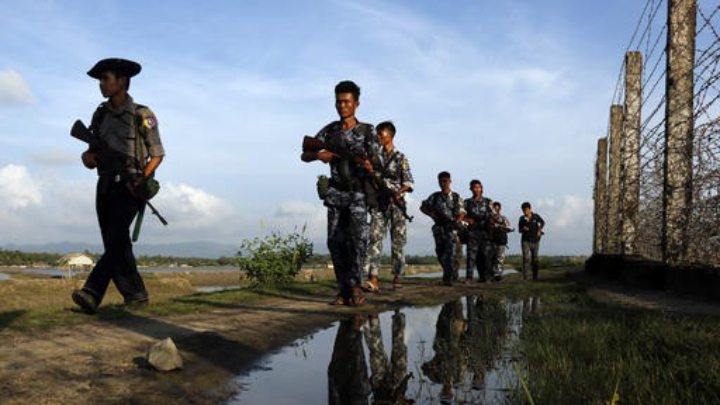 The Bangladesh-Myanmar border is not far away from Nur Ahmed’s tea stall. The outpost of Border Guard Police (BGP) over the Tumbru hill in the Rakhine state of Myanmar can be seen from the hilltop near the tea stall. Two BGP members were seen patrolling from the hilltop. The base of BGP is below them. Heavy weapons were stationed there.

There were few locals in the tea stall. Chhamuda Begum, 45, is one of them. She was saying, “It has become impossible to stay at home due to the sound of continuous gunshots. We are passing days in fear with our children.”

Reiterating Chhamuda, farmer Mohammad Yunus, 45, said two mortar shells were fired from the BGP outpost at around 9.15am Sunday. The earth began to shake with the sounds of the shells. He said the firing has been going on for over a month. The sound of gunshots can be heard from morning till night. Sometimes mortar shells are fired from helicopters also.

The tea stall of Nur Ahmed is located in the Pashchimkul village in ward no. 1 of Ghumdhum union along the border. Pashchimkul one of the villages of Bangladesh bordering Myanmar where people’s lives are at stake due to fight between the Myanmar Army and Arakan Army (AA).  This scenario of fear came up during the conversations with the residents of Pashchimkul village after reaching there from Cox’s Bazar overcoming various hurdles on the way on Sunday morning.

The people of the village said that when the shells are fired with a loud sound, flares of fire appear in the sky and the ground starts to shake. And immediately after that people start running in panic. The mothers are more concerned about their children. There is not only fear, some villagers even have suffered losses.  The glass windows of some houses were broken as the ground shook after the shelling. The mud walls of some houses have collapsed. Cracks have appeared on the walls of old buildings. Many have left the area in fear.

The Naikhangchhari upazila is about 464 sq km in size. Of the five unions of upazila, Ghumdhum has a 15 km border with the Rakhine state of Myanmar. The population of this union is around 15,000. Firing and mortar shelling has been going on over a month along this border.  Besides, helicopters are being used for bombing, firing and shelling. Overall, the normal life of at least 22,000 residents of Ghumdhum, Naikhyangchhari Sadar, Dochharhi and Baishari union has been greatly disrupted.

This correspondent started for Ghumdhum from Cox’s Bazar on a CNG-run auto-rickshaw on Sunday morning. He passed through several check posts of Border Guard Bangladesh (BGB). The more he was advancing towards the borders, the more desolated the surroundings were becoming. The correspondent crossed the BGB check post in Tetultali area near the Pashchimkul village at around 9.30am.

He heard the sound of mortar shells while talking to the villagers at Nur Ahmed’s tea stall at around 11.00am. The houses nearby started shaking with the sound.

The walls of most of the houses in Pashchimkul village are mud walls with tin-sheds above.  There are a few pucca buildings as well. The walls of farmer Zamir Ahmed’s house are made of mud.

He said a mortar shell also fell near his house on Friday night. His house was also damaged due to the tremors in the ground caused by the shell.

The locals said they had lost their peace of mind due to the firing along the border. People are hardly leaving their houses. The attendance of students in the schools has also decreased. The SSC examination centre of Ghumdhum High School was shifted to Ukhiya upazila on Saturday.

After finishing the conversation with the residents of Pashchimkul, including Zamir Ahmed, this correspondent went towards the Tumbru market. There some 4,200 Rohingyas reside in a camp on no man’s land. A teenager died after a mortar shell fell in this camp last Friday. Five others were injured in the incident.

Bar to go to the Tumbru border

There was hardly any auto-rickshaw carrying passengers on the road along the Myanmar border on the way to Tumbru. BGB members were seen patrolling on the road. There were also guards along the border. Although there were paddy fields beside the barbed wire fence, there was no farmer.

It was 11.45am by the time this correspondent reached the BGB check post at the entry of the Tumbru border in West Tumbru. There was a long queue of vehicles as the members of BGB were checking the identity of each passenger. 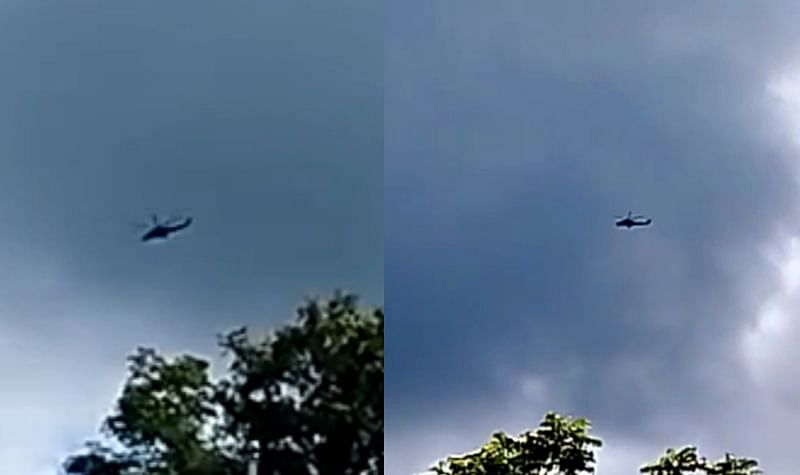 Two shells fired from a helicopter of Myanmar army fall inside Bangladesh territory in Naikhongchhari, Bandarban on 3 September 2022.Prothom Alo

Upon getting this correspondent’s identity BGB member Zarifur Rahman told him, “We have sent back a number of newspersons since the morning. You too have to return. Some six to seven mortar shells have been fired so far since the morning. There is a security risk. Please go back.”

This correspondent heard the sound of another mortar shell while he was near the check post at around 12.15pm. Speaking regarding this, Khairul Islam, assistant organising secretary of upazila BNP, said they had been passing the days in fear for over a month. Many have taken shelter in Cox’s Bazar town or in Ukhiya in their relative’s houses. There is no sign of a ceasefire.

‘How many more days?’

Considering the precarious situation along the Ghumdhum border, it has been decided to make a list of the families in the zero line-adjacent areas. The decision was taken in a meeting between the chairman and members of Ghumdhum union parishad and the administration at the office of Naikhyangchari upazila parishad Sunday. Upazila nirbahi officer (UNO) Salma Ferdous presided over the meeting.

The residents of Ghumdhum say the pattern of shelling this time is different than previous times. They haven’t seen mortar shells being fired from helicopters or fighter jets.

Jamal Hossain, a resident of Pashchimkul village and the organising secretary of upazila Awami League, told Prothom Alo, “There were also firing along the border. That time, the RSO (Rohingya Solidarity Organisation) and the Arakan Rohingya Islamic Front were fighting with the Myanmar Security forces. Now, the fight is between the Arakan Army and Myanmar Army.  But this time there is more anxiety and fear among people. I don't know how many more days I have to spend days in fear like this.”