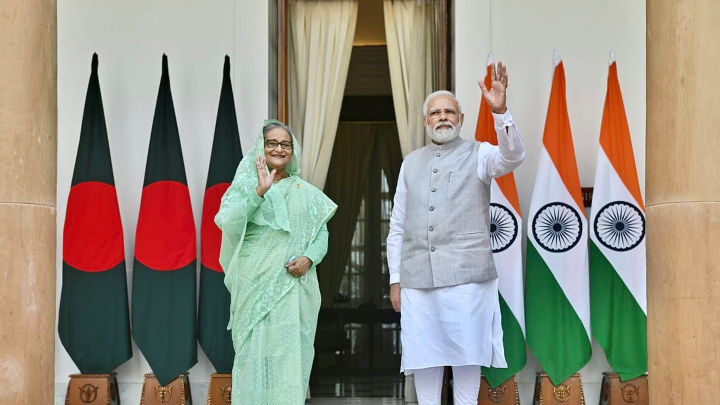 The visit yielded seven Memorandums of Understanding (MoUs) mainly on water resources management and connectivity while she had other engagements as well drawing the huge attention of newspapers, news agencies and TV channels.

The Indian media is seen to be setting or reflecting the tone of the country’s policy while they largely described it as a “very crucial” tour against the backdrop of the political scenarios in both the countries and the region alongside the global crisis.

Some articles and comments tended to focus particularly on the significance of the visit in the context of the Ukraine war that posed a negative impact on the global supply chain and fuel markets.

“The deepening of ties between Bangladesh and India comes at a time of increased uncertainty in South Asia,” The Indian Express wrote in an editorial on September 9, a day after Sheikh Hasina left New Delhi after her four-day India tour.

It noted that the visit came while Sri Lanka and Pakistan were reeling from economic and political crises, even as the region as a whole is dealing with the twin shocks of the pandemic and the supply chain problems caused by the conflict in Ukraine.

“Against this backdrop, the significance of the enhanced economic cooperation and connectivity put in place during Bangladesh Prime Minister Sheikh Hasina’s visit to India from September 5 to 8 cannot be understated, “ the editorial read.

India’s renowned strategic analyst KP Nayar wrote a post-editorial in The Tribune stating that the Bangladesh Premier’s visit was a case of history repeating itself.

He said In order to put India-Bangladesh relations on firmer foundations for some potentially turbulent years ahead, New Delhi appears to have taken a leaf out of PV Narasimha Rao’s diplomatic notebook 30 years ago.

“It is of a piece with what is arguably India’s most reliable partner in the neighbourhood, one that has been nurtured by both sides, especially in the last decade,” he wrote.

He said on the trade front, both sides directed officials to begin negotiations on the Comprehensive Economic Partnership Agreement (CEPA) which was long overdue as “India is Bangladesh’s second biggest trade partner and its largest export market in Asia”.

Nayar wrote on both border management and river waters, the two issues on which “there have historically been differences between Delhi and Dhaka”, significant progress was made.

The Hindustan Times carried an article by Harsh V. Pant, the vice president of Studies and Foreign Policy at Observer Research Foundation (ORF) that headlined “Delhi-Dhaka ties have entered a new golden age”.

“The visit of Bangladesh Prime Minister (PM) Sheikh Hasina to India . . . underscored the real bond between two neighbours as well as two peoples in a region that remains highly fragmented,” Pant wrote.

He added: “Hasina remains confident that with PM Modi at the helm, India and Bangladesh can resolve all the existing problems. PM Modi underlined Bangladesh’s special place in the Indian foreign policy matrix as its biggest development and trade partner in the region.”

The article appeared in The Hindu newspaper under the headline “India-Bangladesh ties, a model for bilateral cooperation” and commented  that the contributions of Sheikh Hasina government to nurturing the “special bonding” need to be acknowledged.

India’s former high commissioner in Dhaka Pinak Ranjan Chakravarty in an article, however, wrote “While bilateral ties will continue to grow, inimical forces will seek to undermine goodwill”.

The Indian Express published the article headlined “Mature leadership in India and Bangladesh has not let minor disagreements threaten shared interests” where he wrote both countries must cooperate more closely against this menace if the future has to be secured for economic growth and prosperity.

Chakravarty wrote “Significantly” there was an agreement on the water-sharing formula for the river Kushyara that flows into Bangladesh from Assam’s Silchar district while India requested the finalisation of the temporary water sharing accord on the Feni river, which meets Tripura’s water requirements.

“The pending Teesta agreement (however) has been caught in the quagmire of Centre-state relations in India. The Joint Rivers Commission has been mandated to examine the sharing of waters of 54 transboundary rivers and flood data sharing,” he commented.

He said Bangladesh has announced 200 scholarships to descendants of children of Indian military personnel who laid down their lives in the 1971 Liberation War while India has a programme of providing medical facilities for war veterans and their families and “these measures cement people-to-people ties”.

Chakravarty said negotiations on the CEPA were to start shortly while Bangladesh would graduate from an LDC to a developing country by 2026 and would no longer be entitled to trade and other benefits that are accorded to LDCs under international and regional trading agreements.

“The CEPA will help manage this transition and preserve the trade privileges that Bangladesh enjoys,” he wrote.

Journalist and Columnist Subimal Bhattacharjee said Sheikh Hasina’s India visit “set the ball rolling for the next few years of cooperation on many fronts, primarily economics and connectivity”.

“Coming at a time when both the countries have achieved many lasting milestones in the eight years of coterminous leadership of the current prime ministers in their respective nations, this visit has set the ball rolling for the next few years of cooperation on many fronts, primarily economics and connectivity,” he wrote in the Indian Express.

Journalist and Bangladesh affairs expert Gautam Lahiri said with the Bangladesh PM’s visit appeared as a guideline on how to carry forward the existing bilateral relationship between the two neighbours to a newer height amid current global and regional perspective has been created.

Talking to BSS, he said the journey of implementing Bangladesh’s long-standing demand for distribution of water from 54 common rivers has begun with the signing of the Kushiyara water sharing agreement.

He noted that India agreed to provide tax-free transit to Bangladesh to export its goods to Nepal and Bhutan while the decision was taken so Bangladesh could import electricity from those two neighbours.

“Considering all those things, we can say the PM Sheikh Hasina’s India visit was a successful visit in which many outstanding issues between the two countries were resolved,” Mr Lahiri, the former President of Press Club of India (PCI) said.