on scored in the 73rd, 84th and 86th-minute to end his eight-game goal drought in style. 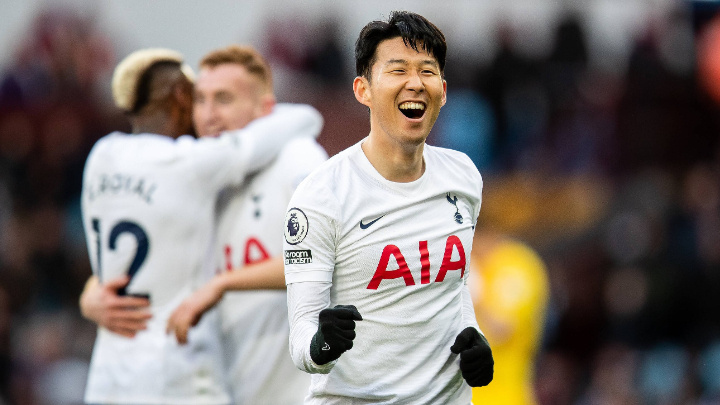 SON HEUNG-MIN RESPONDED to being dropped by coming on and ending his goal drought in style with a sensational hat-trick in Tottenham’s 6-2 hammering of sorry Leicester.

Spurs boss Antonio Conte left the South Korean on the bench following an eight-match run without finding the net but called for his forward in the 65th minute and he responded with a remarkable treble.

Tottenham already led 3-2 at this point after Harry Kane, Eric Dier and Rodrigo Bentancur efforts had cancelled out goals from Youri Tielemans and James Maddison for the visitors.

It was a second consecutive heavy loss for under-fire Leicester boss Brendan Rodgers to ensure they remain bottom of the Premier League and winless.

Dier had marked his England recall with a goal while Maddison responded to his latest international snub with another fine strike.

But it was Son who stole the headlines to ensure talk of his barren run became old news on a historic day where the two clubs paid tribute to the Queen.

Son was dropped following the midweek loss at Sporting Lisbon, the first first time he had started a Premier League match on the bench when fully-fit since July 2020.

Republic of Ireland international Matt Doherty joined him, but was an unused substitute.

The Queen was remembered ahead of kick-off with floral wreaths laid by both clubs and a minute’s silence, which was momentarily spoiled by some shouting between a smattering of fans around the stadium.

Once play did get under way it was full-throttle in N17 with three goals in 21 minutes.

Leicester took a surprise early lead when Tielemans fired home from the penalty spot at the second attempt.

Davinson Sanchez gave away the spot-kick for a reckless lunge on James Justin but Hugo Lloris briefly spared his blushes with a superb save to deny Tielemans.

Lloris had moved off his line too quickly though and the Leicester midfielder made no mistake with his second penalty, again sending it towards his left and this time scoring in the seventh minute.

A leveller was immediately found by Spurs as Kane struck.

Dejan Kulusevski, back in the team at Son’s expense, produced a trademark excellent delivery to the back post where Kane headed home his 20th goal in 19 appearances against Leicester.

The league’s basement club were soon in the familiar position of trailing when Dier netted.

Ivan Perisic directed his corner to the near post where centre-back Dier flicked on to find the net for the second time this season.

Not long after Leicester were saved by referee Simon Hooper from conceding another set-piece goal when Wilfred Ndidi’s own goal was ruled out for Sanchez’ foul on goalkeeper Danny Ward.

The Foxes did improve and deservedly went in level at half-time when Maddison lobbed Lloris from Timothy Castagne’s cut-back in the 41st minute.

It was the perfect response to another snub from England boss Gareth Southgate but he should have grabbed a second in stoppage time only for Lloris to make a fine save from close-range with his feet.

After a breathless opening 45, the second period started in the same fashion with Bentancur making it 3-2 within 120 seconds.

The Uruguayan won back possession from Ndidi, ran at the Leicester back four and curled home to open his account for the club.

There was a brief lull following the fifth goal but the Foxes started to build up momentum again by the hour mark and Lloris made a pivotal one-handed save to thwart Patson Daka.

Conte had seen enough and brought on Emerson Royal, Cristian Romero and Son.

The latter, with a point to prove, duly did that with 17 minutes left to end his drought in spectacular fashion.

Bentancur passed into Son’s path and he ran at the Leicester defence before he curled home from 22-yards.

Son’s celebration hinted at his frustration at starting on the bench, but he was not done there.

A stunning second followed on his left foot, after Kane’s pass, before he netted a third.

Pierre-Emile Hojbjerg sent Son clear and he fired past Ward again but initially saw the offside flag raised. VAR ruled he was on to ensure the South Korean left the pitch with the matchball.