England Euro 2022 hero Alessia Russo was on target for United, while Maya Le Tissier had a dream debut. 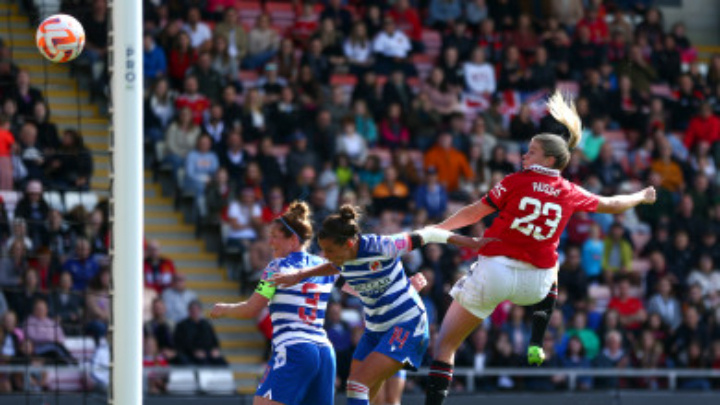 MANCHESTER UNITED OPENED their Women’s Super League season with a 4-0 victory over Reading in front of a record crowd at Leigh Sports Village.

All four goals came inside the opening 35 minutes as United showed their intent to improve on last season’s fourth-placed finish.

The feel-good factor in women’s football after England’s Euro 2022 success this summer was reflected by a record crowd of 7,217.

United’s previous highest attendance at Leigh Sports Village was 4,835 in 2018.

It was a day to forget for Reading’s Republic of Ireland duo Grace Moloney and Diane Caldwell. Moloney was in the Royals’ goal, while new signing Caldwell was an unused substitute against her former club.

The hosts took control inside four minutes when Le Tissier met Zelem’s corner on the volley with her instep and the ball looped over Reading ‘keeper Moloney.

“First goal, so shit from me today… first half team performance wasn’t anywhere near good enough… but hold my hands up, so poor from me,” she wrote on Instagram afterwards.

Reading had a penalty claim turned down when Deanne Rose’s cross hit the outstretched arm of Millie Turner, but play was waved on with the United defender being only a few yards from her opponent.

Zelem doubled the lead after 14 minutes on the occasion of her 100th United appearance.

Russo was brought down by the onrushing Moloney after being released by Ella Toone, and the United skipper stepped up to strike a confident penalty.

The lively Toone was denied a third by Moloney before Reading lost Rose to what appeared to be nasty ankle injury midway through the first half.

Le Tissier’s dream debut continued when she was left unmarked 12 yards out after 25 minutes to head home another well-directed Zelem corner.

Reading forced a first save from Mary Earps as the England goalkeeper reacted smartly to push out Lauren Wade’s near post header.

Lucia Garcia was denied a debut goal by the sprawling Moloney and United’s dominance was almost total after the break.

But Reading were spared further punishment as Russo headed wide and substitute Nikita Parris was twice foiled by brave defending.

Katie McCabe’s Arsenal were 4-0 winners over Brighton & Hove Albion last night — home of Megan Walsh and Megan Connolly — while several of the other 12 Irish internationals in the WSL this season will be in action tomorrow.

This weekend’s WSL results and fixtures