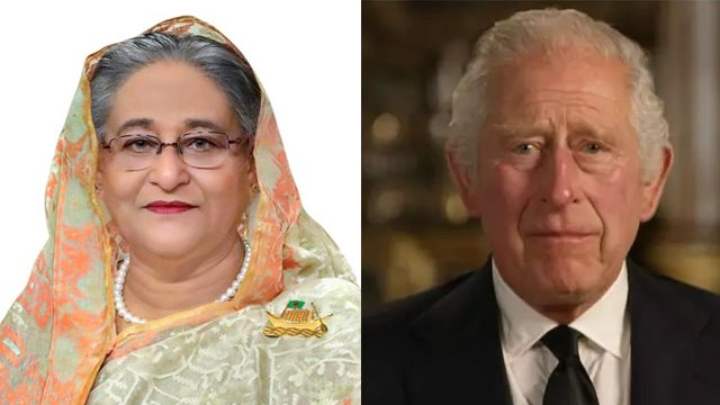 The King also thanked the President and the Prime Minister as well as the people of Bangladesh for their sincere condolences and sympathies to the Royal family following the death of Queen Elizabeth II.

During the call, Prime Minister Sheikh Hasina said, “Her late Majesty was like a mother figure to me and an extra-ordinary head of Commonwealth," adding that "To pay my personal tribute to her, I decided to attend her state funeral."

The Prime Minister also informed the King that in Bangladesh, her government observed three days of state mourning as a mark of respect to the late Queen while special prayers were offered for her eternal peace.

She also took the opportunity to personally felicitate King Charles III on his accession to the throne and wished him a long and prosperous reign.

Recalling King Charles’s (then Prince Charles) visit to Bangladesh in 1997, Prime Minister told the King that Bangladesh was preparing to receive King Charles and the Queen Consort in the coming month on the occasion of 50th anniversary of Bangladesh-UK diplomatic relations.

In response, King Charles III said, “The Queen Consort and I were so much looking forward to our visit to Bangladesh on the 50th anniversary, however, due to the recent turn of events, unfortunately we are having to cancel it.”

The King also extended his best wishes for the people of Bangladesh and the Bangladesh-British diaspora.

The Buckingham Palace scheduled the phone call for the new King to personally speak to Bangladesh Prime Minister now on state visit to the UK to attend late Queen Elizabeth’s state funeral on Monday.