Ireland could get €3bn from windfall tax on energy companies 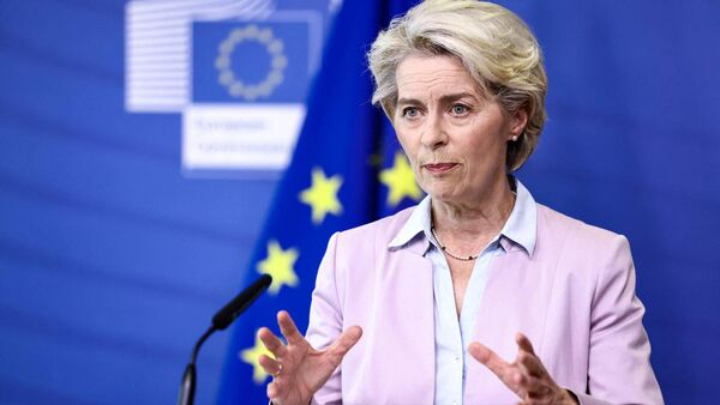 Ursula von der Leyen announced yesterday that the proposed charge will raise more than €140bn for member states to cushion the blow of the fossil fuel crisis. Picture: Kenzo Tribouillard/AFP via Getty Images

Ireland could be in line to get €3bn or more from a windfall charge on profitable energy companies which will further help households with soaring bills.

President of the European Commission, Ursula von der Leyen announced yesterday that the proposed charge will raise more than €140bn for member states to cushion the blow of the fossil fuel crisis caused by Russia’s war on Ukraine.

Ireland receiving €3bn is based on initial assumptions considering the Irish share in the euro area and EU GDP.

Minister for Environment Climate and Communications, Eamon Ryan, welcomed the proposal and stressed that the measure needs to be implemented as soon as possible.

“But Europe has to move on this quickly and decisively.

“The current electricity market is not working for people. Eamon Ryan said 'Europe has to move on this quickly and decisively'. Picture: Maxwells

“This is one way we can begin to realign it."

Tanáiste Leo Varadkar told party colleagues at the Fine Gael parliamentary party meeting that further interventions may be needed from the Government to help households with energy bills next year.

Due to market uncertainty, Government needed to "keep something in reserve," in case households needed more help, he said.

He also outlined a package for businesses to be implemented soon after the budget that will include three elements, "including a low-cost low interest loan; a grant system which we'll target at manufacturers and exporters, those with high energy costs; and then something more general for the hospitality sector, for retail - those sectors facing high energy bills."

A senior Government source told the Irish Examiner that this could mean more one-off measures like additional energy credits next year, if prices don't come down.

The source added: "We just don't know how long this will go on for and we have to be prepared for the long haul. And not to spend all of our resources now."

Members of the Primary Principals Forum have said they will not be able to meet the costs of school utility bills this winter without significant Government support.

Seamus O’Connor, the principal of Scoil Bhríde Midleton said this winter's bills for heat and light are going to be “astronomical.”

On Tuesday, the Taoiseach said schools across the country will receive help in the upcoming budget.

However, Mairead Duggan, the principal of St Joseph's National School in Castlemaine, Co Kerry, said yesterday’s announcement does not alleviate her concerns and that she’s “very worried” about the winter.

“I would take the commentary of the Government with a pinch of salt, and I’ll believe it when I see it,” she said.

We had bills that were up €1,500 last winter for a school with four mainstream classes and two ASD classes because we have antiquated systems.”

Her school’s boiler had to be replaced last winter while the school’s windows are falling apart when open. The school also has to run humidifiers in some classrooms while using dehumidifiers in others.

“The system is under pressure in general, schools are underfunded anyway, without this energy crisis.”

Ms Duggan said that she was worried about how the school was going to meet the bills on time.

“Having to rob Peter to pay Paul is how we run our schools,” she said.

“We’re taking in children from other countries and we’re under-resourced for those children as well.”