Erling Haaland’s winner four minutes later was even better. Joao Cancelo sent in a cross from the left with the outside of his right foot and Haaland showed amazing agility to leap high and redirect the ball into the net with his left foot.

Erling Haaland shines for Manchester City in their victory over Borussia Dortmund in the UEFA Champions League 2022. 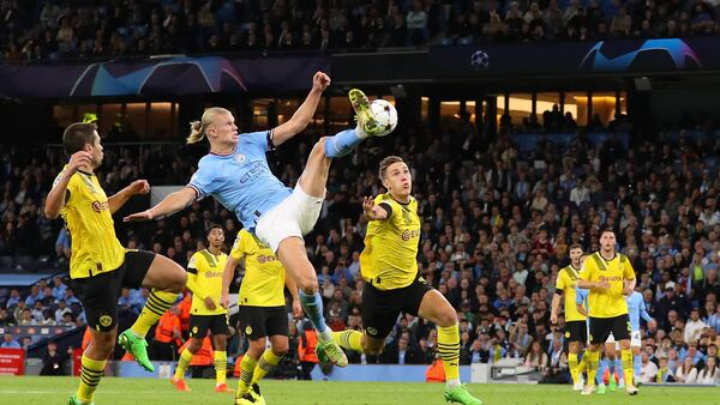 The cross reached Erling Haaland at shoulder height, about a meter in front of the Manchester City striker. No problem for this generational talent. Producing a spectacular acrobatic volley with the outside of his left foot, Haaland completed a late comeback by City against Borussia Dortmund — the German club he left in the offseason — in a 2-1 win in the Champions League on Wednesday (September 14).

Dortmund kept its former star in check for almost the whole game, with City unusually sloppy in possession and getting increasingly frustrated at Etihad Stadium. Indeed, Pep Guardiola’s team hadn't even had a shot on target before John Stones — a center back playing out of position at right back — popped up just outside the area and, egged on by the home crowd, smashed a swerving shot high into the net from outside the area in the 80th minute.

Haaland’s winner four minutes later was even better. Joao Cancelo sent in a cross from the left with the outside of his right foot and Haaland showed amazing agility to leap high and redirect the ball into the net with his left foot.

Guardiola said it reminded him of a famous goal scored by Johan Cruyff for Barcelona against Atlético Madrid in 1973-74. Haaland impressed himself, too, with the goal that took his overall tally in the Champions League to 26 in 21 games.

Asked if he thought Dortmund defended well against him, Haaland said: “They didn't stop me. I scored.”

The Norway striker has now scored in six straight games for City in all competitions, and 13 in eight games in total. This was one of his quietest games in a City shirt. Yet he still scored.

“That shows his quality,” said Dortmund midfielder Jude Bellingham, who put the German team ahead in the 56th. “He’s not always in the game, but you give him half a sniff and it ends up in a goal.”

City has opened Group G with two straight wins in its latest bid for a first Champions League title, and now heads into a double-header against FC Copenhagen. Two wins against the Danish champions and City might seal a place in the last 16 with two games to spare. Guardiola was not happy with his team’s performance against Dortmund, however.

“We played in the wrong gear today,” he said. “No aggression. Incredibly passive.”

After a forgettable first half that saw Dortmund successfully smother City, Bellingham gave the visitors the lead by darting in between Manuel Akanji and Haaland — who were his teammates last season — and glanced in Marco Reus' cross from the left. City was transformed after the introduction of Bernardo Silva, Phil Foden and Julian Alvarez in a triple substitution.

“They changed our pace and there were two excellent goals,” Guardiola said.