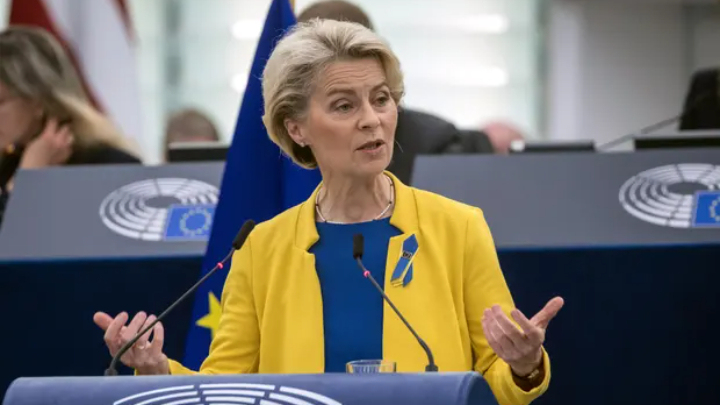 The European Commission president, Ursula von der Leyen, told MEPs: ‘This is the time for us to show resolve not appeasement.’ Photograph: Christophe Petit-Tesson/EPA

The European Commission president, Ursula von der Leyen, has insisted “Putin will fail and Europe will prevail”, as she vowed to accelerate Ukraine’s EU integration.

Addressing the European parliament in Strasbourg, the EU executive president issued a rallying call intended to unite member states grappling with an energy crisis as winter draws near. Von der Leyen described the Russian invasion as not only a war on Ukraine but “a war on our economy, a war on our values and a war on our future”.

Dressed in the blue and yellow colours of Ukraine’s national flag, the commission president announced she would visit Kyiv later on Wednesday and planned detailed discussions with Ukraine’s president, Volodymyr Zelenskiy, on ensuring Ukraine’s “seamless access to the single market”.

Ukraine’s first lady, Olenka Zelenska, was among the audience in Strasbourg and given a standing ovation by MEPs.

Von der Leyen promised to work with Zelenska on the reconstruction of Ukrainian schools and promised €100m (£87m) in EU funds. An estimated 70 schools have been damaged or totally destroyed by Russia.

The European Commission president, who has already visited Kyiv twice since the outbreak of war, also said the EU would stay the course with its sanctions on Russia. “The sanctions are here to stay,” she said. “This is the time for us to show resolve not appeasement.”

She said the EU’s economic restrictions on the Russian economy were working, and offered some eyecatching claims. “The Russian military is taking chips from dishwashers and refrigerators to fix their military hardware, because they ran out of semiconductors.”

As expected, Von der Leyen confirmed the commission was pushing ahead with windfall taxes on energy companies’ excess profits. EU officials hope to raise €140bn, which will be channelled to vulnerable households and businesses struggling with a ten-fold increase in gas prices since before the Covid pandemic.

“Major oil, gas and coal companies are also making huge profits,” Von der Leyen said. “So they have to pay fair share – they have to give a crisis contribution.” She also confirmed that the profits of generators of low-carbon electricity, renewable and nuclear firms, would also be capped, with the funds redistributed to people in need.

The commission has retreated on the idea of a price cap on gas. EU member states were split over which countries the cap should cover, while some were flatly opposed to the idea, fearing a threat to security of supplies.

Von der Leyen suggested she had not abandoned a price cap in some form, promising to develop “a set of measures that take into account the specific nature of our relationship with suppliers, ranging from unreliable suppliers such as Russia to reliable friends such as Norway”.

And in a victory for countries, such as Spain and France that have long complained about EU electricity market rules, she promised “deep and comprehensive reform” that would help consumers benefit from cheaper renewables.

The wide-ranging speech also touched on the climate crisis, with Von der Leyen arguing the record-breaking hot and dry summer of 2022 should galvanise efforts for adaptation. She promised to double the EU’s fleet of fire-fighting aircraft and helicopters to fight forest fires.

She also opened the door to a revision of the EU’s founding treaties and promised tighter rules against corruption inside EU member states.

With Russia’s invasion of Ukraine the main theme of the speech, Von de Leyen called for a rethink policies from energy to the treatment of refugees. In a reference to the EU’s long-stalled talks on the common management of asylum seekers, Von der Leyen said: “Our actions towards Ukrainian refugees must not be an exception. They can be a blueprint for going forward.”

She also acknowledged the long-voiced complaints of Poland and Baltic states that their warnings about the Russian president had gone unheeded in western Europe. “We should have listened to the voices inside our union…. They have been telling us for years that Putin would not stop.”

Unlike similar speeches in recent years, there was no direct mention of the UK, although Von der Leyen, an anglophile who studied at the LSE, paid tribute to Queen Elizabeth II. “She is a legend,” Von der Leyen said. “She was a constant throughout the turbulent and transforming events in the last seventy years.”