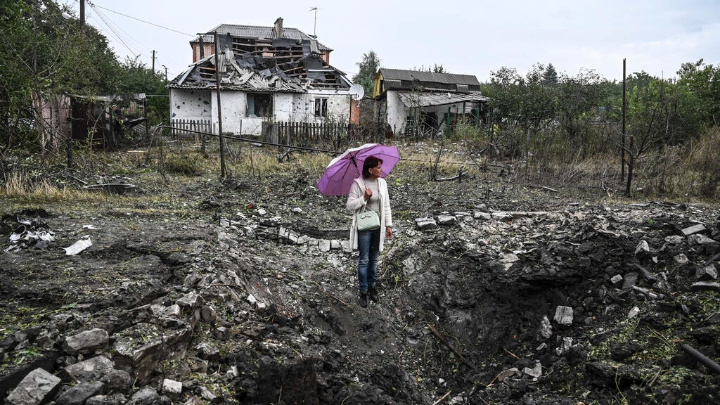 A woman stands in front of a destroyed house, in Kramatorsk, Donetsk region, on September 12, 2022 Juan BARRETO AFP

Ukraine forces said Monday their lightning counter-offensive took back more ground in the past 24 hours, as Russia replied with strikes on some of the recaptured ground.

The territorial shifts were one of Russia's biggest reversals since its forces were turned back from Kyiv in the earliest days of the nearly seven months of fighting, yet Moscow signalled it was no closer to agreeing a negotiated peace.

"Ukraine has turned the tide in its favour, but the current counter-offensive will not end the war," US think tank Institute for the Study of War tweeted.

Kyiv had already announced the recapture of the strategic city of Izyum in the country's east, one of a series of victories claimed against Russia's army.

Ukraine said on Monday its forces recaptured 500 square kilometres (193 square miles) in the southern Kherson region which were in addition to the huge gains in the east over the weekend.

Moscow conceded having lost territory, which experts saw as a serious blow to its war ambitions, but Kremlin spokesman Dmitry Peskov saw no prospects for negotiations.

"The special military operation continues and will continue until the objectives that were originally set are achieved," he added, using Russia's terminology for the internationally condemned war.

"A total blackout in the Kharkiv and Donetsk regions, a partial one in the Zaporizhzhia, Dnipropetrovsk and Sumy regions," Zelensky said in a statement on social media.

"No military facilities," he added. "The goal is to deprive people of light and heat."

Local Ukrainian authorities pointed to Russian strikes on their power infrastructure, but some districts reported later that power had been restored.

In Kharkiv region, a Russian strike on a power station killed one employee, Governor Oleg Synegubov said. He added that power had been partially brought back.

The Russian strikes hit 15 locations on Sunday, from Kramatorsk in the east to Mykolaiv in the south and Dnipro in between, Ukraine's military said.

The blackouts hit regions with an estimated combined population of nine million people -- including territory controlled by Russia.

Ukraine had already lost all power from the Russian-controlled Zaporizhzhia nuclear plant.

The country's nuclear energy agency said the final reactor at the plant, Europe's largest nuclear power station, had been shut off as a safety measure.

The speed of Ukraine's fightback has apparently caught Russia's military off-guard, bringing swathes of territory Moscow had controlled for months back into Kyiv's fold.

Images posted by the Ukrainian military showed crates of munitions and military hardware scattered across territory abandoned by Russian forces.

In his evening address Sunday, Zelensky praised the soldiers who had "liberated hundreds of our cities and villages... and most recently Balakliya, Izyum and Kupiansk".

Around Balakliya, one of the first towns to be retaken by Ukrainian troops, AFP journalists saw evidence of fierce battles, with buildings destroyed or damaged and streets mostly deserted.

The country's foreign minister used the momentum to appeal to Western allies for more stockpiles of sophisticated weapons.

"Weapons, weapons, weapons have been on our agenda since spring. I am grateful to partners who have answered our call: Ukraine's battlefield successes are our shared ones," Dmytro Kuleba said.

Russia's military made the surprise announcement Saturday that it was "regrouping" its forces from Kharkiv to the Donetsk region just south to focus its military efforts there.