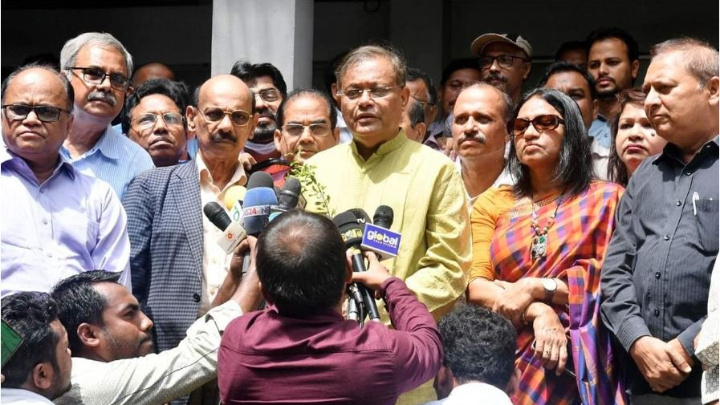 Information and Broadcasting Minister Hasan Mahmud on Sunday said BNP is frustrated as the Prime Minister’s India visit has been very successful and satisfactory.

“BNP feels sad. For this, they are talking nonsense,” he told reporters at Jatiya Press Club (JPC) in the capital.

The minister said the visit of the premier to India has been very successful and fruitful while many agreements and memorandum of understandings (MoUs) were signed during the visit. And the big achievement of the visit is to get the opportunity of exporting products to third countries using the land of India without any duty, he added, BSS reports.

Hasan said the long-standing issue of using the land of India has been resolved and now Bangladesh will be able to do export and import with Nepal and Bhutan through Chattogram and Mongla ports via India. It is a big achievement, he added.

The minister said the government and Prime Minister Sheikh Hasina have realized everything from India. The government has also won the maritime boundary by suing India in international court, he added.

He said none could realize the enclaves and there were no identities of the thousands of people living in those enclaves. The AL government under the supervision of Prime Minister Sheikh Hasina had realized the enclaves after many decades of the agreement and the size of the country (Bangladesh) has increased, said Hasan, also Awami League joint general secretary.

He said the Awami League government has realized duty-free exports of all products except 20 including tobacco. Besides, the agreement over Kushiara River water sharing is also another big achievement, he added.

Replying to a query over Teesta River water sharing issue, Hasan said the central government of India has no objection over the issue. But, according to rules and policy of India, an approval of state government is needed, he added.

But, he said, discussions are going on in this regard.

The minister hoped that the matter will be solved soon.

He said the BNP leaders, including its secretary general Mirza Fakhrul Islam Alamgir, feel sad for the PM’s successful India visit. And they are busy in spreading confusions, he added.

He said Begum Khaleda Zia had forgotten to tell about Ganges water sharing during her visit to India.

Earlier, the minister inaugurated the tree plantation programme of JPC at its garden by planting a tree.

Hasan extended thanks to the JPC executive committee members for organizing the tree plantation programme and said such initiatives will encourage the countrymen.