With the fourth generation Samsung Galaxy Z Flip 4 now out, we took it out on a test drive to see how it stacks up 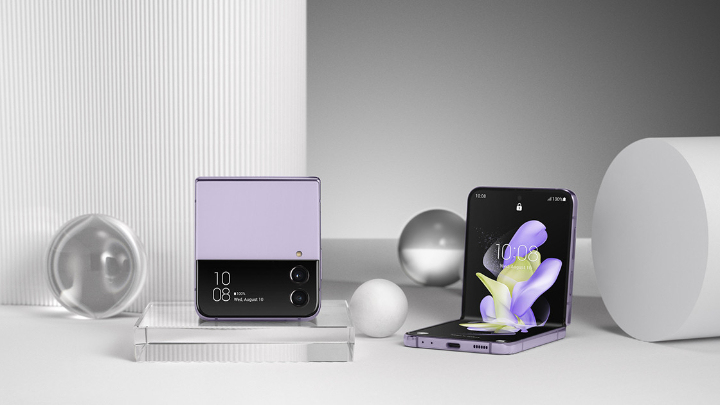 Samsung has been leading the market when it comes to foldable phones. With the fourth generation Samsung Galaxy Z Flip 4 now out, we took it out on a test drive to see how it stacks up.

The phone has plenty of features to offer. However, there are some drawbacks as well.

The 8GB RAM and 128GB ROM version of the Samsung Galaxy Z Flip 4 is priced at Tk154,999 in the Bangladeshi market.

The real success story of the Galaxy Z Flip series lies in its design language.

The Galaxy Z Flip 4 hardly looks any different from the Flip 3 from the outside. You'll probably be ok with this if you adore the clamshell foldable design.

The phone, while being very tall when unfolded, easily fits into the pocket when folded.

If you want something reasonable, you can choose the grey colour, but you can also choose from the more vibrant purple or pink gold. While there are other color options, only these three are available in Bangladesh.

The frame, which was minimally textured on Flip 3, has seen a modest modification between generations.

It is now highly polished, whereas the back glass (apart from the "visor" section) is diffused rather than glossy.

It gives off a classier appearance in my opinion and makes fingerprints less noticeable. To me, it looked like a  good upgrade overall.

Samsung was able to somehow make the Flip 4 smaller despite having a primary screen that is the same size as the Flip 3.

The phone's logo-engraved hinge doesn't stick out quite as much when folded as it did on the previous generation; with a folded height that is 1.5mm shorter, in part due to thinner bezels.

It also made more room for a bigger battery.

When viewed from the side, the screen still has a noticeable gap where it divides in half, making dust entry a possibility.

While IPX8 water resistance from the previous Flip is not certified to defend against grit, the point is still on Samsung’s side because rival foldable smartphones do not offer such protection.

The screen crease is still visible, but less while using the phone in a dark environment. The crease becomes more visible while using a screen protector. This is something Samsung has little control over. They can’t do anything about it and we don’t expect someone to spend Tk1.5 lakh to buy a smartphone and use it without a screen protector either.

Like last year, the side-mounted power button that also serves as the fingerprint sensor is in a strangely high position.

Don't even get me started on the volume rocker, which is located on the upper right side of the upper part.

However, once your finger is properly positioned, the fingerprint sensor itself responds fairly quickly.

Like all other flagship devices, the Flip 4 also doesn’t have a headphone jack.

The display inside The Galaxy Z Flip 4 is a 6.7-inch Super AMOLED with a 1080p resolution and an adaptive 1-120Hz refresh rate.

It is intensely saturated right out of the box, as is customary for Samsung to demonstrate AMOLED's colour capabilities. But the saturation can be adjusted from the settings according to the taste of the user.

The cover screen is also a Super AMOLED panel and measures 1.9 inches.

In terms of brightness, the Galaxy Z Flip 4 stays behind both the Galaxy S22 Plus and the iPhone 13 Pro.

While 772 nits is a very good brightness level and is definitely viewable in bright sunlight, once you become used to the brightness of the S22 Plus and iPhone displays, it will be difficult to go back.

However, the colour accuracy of the Flip 4 is outstanding. As mentioned earlier, with the Galaxy Z Flip 4, the display crease, or the point where the two displays meet, is still there.

Unfortunately, it is still rather noticeable. Most of the time, especially while using the phone in a well-lit environment, you can see it and feel it when you run your finger over it. Maybe the next iteration can address this issue better.

The real-life usage experience was amazing, thanks to its adaptive refresh rate of up to 120Hz and the latest and greatest chipset to support it. The display and scrolling feel buttery smooth and I didn’t notice any lags while using the phone.

Samsung is notoriously known for providing two separate chipsets — Exynos and Snapdragon — in their flagship devices depending on the region. Fortunately, that’s not the case for Flip 4.

However, there is a catch.

Snapdragon 8+ Gen 1 offers the smoothest experience while using the phone. I checked the settings and it was only running at 70% while I tested the phone, and I played Asphalt 9 and Mobile Legends on maximum available graphics. I must say, it was a delight playing these games on such a device.

But Flip 4 is, in no way, made for gaming. The phone started heating up the moment I started playing Asphalt 9 and I felt the heat within two minutes.

The chipset used on this phone seemed a bit extreme to me. Flip 4 is not designed for the functions of this beast of a chipset. I believe using a less powerful chipset would have been ideal, given that Samsung reduced the price a little as well.

Then again, the battery life matters a lot here. Even though it is larger than the previous generation Flip, it is still not enough. So, using 8+ Gen 1 helped them save some power.

Samsung does not gamble. And they didn’t gamble here either. They provided the best chipset and reduced its performance in the settings to keep things cool. And the power to increase the performance was given to the user.

However, I don’t think anyone will need it since the phone is not for gaming anyways.

There are three cameras in total in Flip 4. A 10MP (f/2.4) punch-hole camera is mounted in the center of the foldable display, while a 12MP main sensor and a 12MP ultrawide sensor are located next to the cover display on the back.

The primary 12MP sensor of the Flip 4 is somewhat broader and promises brighter stills and videos (by up to 65%), thanks to larger pixels (1.8 mm, up from 1.4 mm previously), even though the apertures stay the same between generations.

The remaining hardware from the Flip 3 looks to be unaltered.

I personally didn’t like the performance of the selfie camera. However, Samsung’s Flip phones are capable of using the back camera to capture selfies by using the cover display. The selfies taken using that were really nice with colour accuracy.

As far as the photo quality goes, the Flip 4 offers a good experience. Not the best, not as good as the latest S22 Ultra. But good. It provides shots filled with bold colour, nice contrast and great fine detail.

The back camera supports video up to 4K at 30/60 frames per second (fps). You can also capture 1080p videos at 60/240fps, and 720p at 960fps, meaning that the slow-mo videos you capture will go to an extreme level. Give it some practice and you might well be able to capture the lightning in slow-mo during a thunderstorm using that 960fps capability.

The front camera is also capable of capturing 4K videos at 30fps.

The Z Flip 4 weighs a few grams more (187g versus 183g) than Samsung's previous clamshell, despite having smaller overall dimensions and a more compact hinge than its direct predecessor. But it all comes with a good cause.

The original Flip's poor battery life was one of its main drawbacks, which wasn't too shocking given that it had a smaller 3,300mAh battery.

In reality, people who wanted to make the most of the phone's exceptional hardware were unable to use it for an entire day.

Samsung has crammed a larger 3,700mAh cell inside the Z Flip 4 to solve the issue.

The Flip 4 now has a day's worth of battery life, despite only a 12% increase in capacity.

The adaptive display, intelligent power management that adapts dynamically based on usage, and a new battery performance profile menu that offers the opportunity to select between "standard" and a brand-new "light" option all contribute to this.

The Flip 4 also charges more quickly than its predecessor, reaching a maximum of 25W through cable charging and 15W wirelessly, with the same 4.5W reverse wireless charging.

Although it is a positive year-over-year increase, when compared to the larger industry norm, it barely pushes the needle from "lacking" to "acceptable."

However, there is no charging brick in the box.

Samsung Z Flip 4 is not a phone for everyone. Firstly, it is far too expensive. And secondly, it is not one of those good-value-for-money smartphones.

If I am being truly honest, Samsung Z Flip 4 is a technological marvel. This phone is a lifestyle. To get an optimum experience, I would recommend spending a bit more for a decent power bank, preferably wireless, and a good case for the phone.