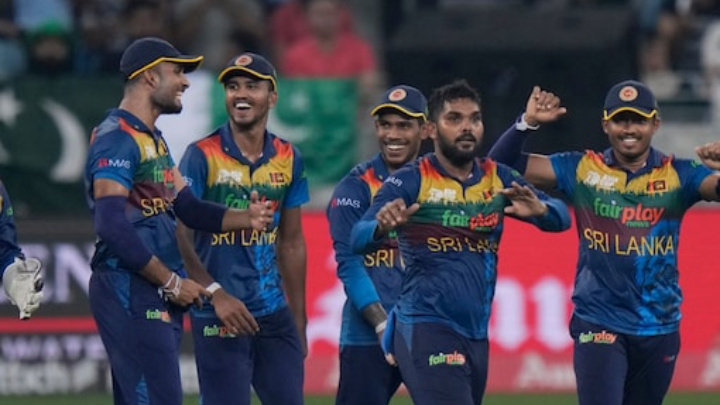 Pakistan batters failed to match up the intensity of the match and were bundled out for 147 in the tricky 171-run chase. Mohammad Rizwan was the leading run-getter for Pakistan as he scored 55 runs but he took many balls (49) which put pressure on the others.

Pramod Madushan was the pick of the bowlers for Lanka as he claimed four wickets. Wanindu Hasaranga also spun his web in the 17th over to take crucial wickets of Rizwan, Asif Ali and Khushdil Shah in the span of five balls.

Chasing the 171-run target, Pakistan lost their skipper Babar Azam early on 5 by Madushan as his lean patch with the bat extended further. Under-fire Fakhar Zaman was dismissed on a golden duck on the next delivery.

Rizwan batted with a cautious approach and shared a 71-run stand with Iftikar Ahmed for the fourth wicket. Iftikar also failed to score at a healthy rate and managed 32 runs off 31 balls before becoming Madushan’s third victim.

Shadab Khan and Haris Rauf had a tough ahead of them with 59 runs required from the last three overs. The tailenders tried hard but it was too much for them.

Dhananjaya de Silva played some quality shots during his 28-run knock but he failed to convert it into a big score.

Rajapaksa fought a lone battle for his team after early wickets to take his team to a fighting total of 170/6 in 20 overs. The left-handed Rajapaksa put on a key 58-run stand for the sixth wicket with Wanindu Hasaranga, who hit 36, to help Sri Lanka to a competitive total after they were in trouble at 58-5 in Dubai. Rauf dismissed Hasaranga, who hit five fours and one six in his 21-ball knock, caught behind for his 50th T20 wicket to break the dangerous stand.

Rajapaksa kept up the attack and survived a dropped catch by Shadab in the deep, soon reaching his third T20 half-century.

Rajapaksa, who finished the innings with a four and six off Naseem in his 45-ball blitz, and Chamika Karunaratne put on 54 runs to further boost the total. Rajapaksa remained unbeaten on 71 runs off 45 balls in which he struck 6 fours and three sixes to pull his team back in the game.