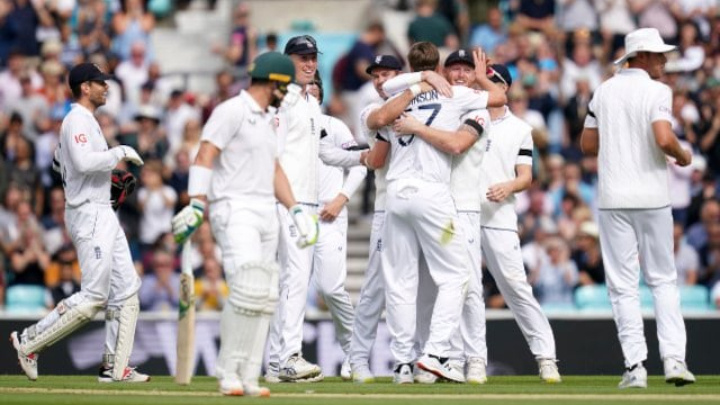 There have been many days in Test match cricket’s long history, but none quite like today at The Oval.

It began with spine-tingling silence, a capacity crowd of over 27,000 people on their feet and completely noiseless for almost ten minutes – from the moment the teams made their way down the dressing room steps until both national anthems had been sung, not a sound to be heard in the entire ground – an extraordinarily unified moment of solemn respect.

There was perhaps a danger that the emotion of the moment could have overwhelmed some of the players, they can after all have never experienced a start to the day quite like it, however of the two sides it was not England who looked out of step to begin with.

A combination of form and fitness had seen South Africa make drastic changes to their batting line-up after defeat at Old Trafford, but if they were hoping for different results then they will have been sorely disappointed.

Robinson was running rampant, he had Keegan Petersen, Ryan Rickleton, Kyle Verreynne and Wiaan Mulder dismissed inside the first 12 overs, with James Anderson picking up Sarel Erwee as well to leave the tourists 36/6, a position they only marginally improved on by lunch, going into the break 69/6.

There were cameos from Khaya Zondo and Marco Jansen, whose performance added further weight to the argument that his non-selection in the second Test was pure madness, but England soon had South Africa all out for 118, just sneaking into their top 50 worst totals of all time.

Stuart Broad was excellent for his 4/41, but the star was Robinson who picked up a career best 5/49 to put England in a position of superiority that ultimately they may feel they had squandered a little by the close.

After a more measured approach in the last Test, England here were back to pure uncut Bazball, the scoreboard racing along at around five an over for much of their innings. There was the inevitable loss of the openers, but when Joe Root and then debutant Harry Brook were together with Ollie Pope in the middle, the hosts would have been eyeing a healthy first innings lead.

Then came a rain delay and with it a final session of the day that saw South Africa sneak somewhat unexpectedly back into proceedings. England slipped from 107/3 to 154/7 by the bad light-induced close, their lead of 36 not quite as match-defining as they would have hoped not long before.

Ultimately it was a fairly unbelievable day of cricket, from the moment of collective respect for a Queen whose reign had been long enough to encompass every Test victory in India’s cricketing history to the 17 wickets that fell in the sessions that followed it – an extraordinary day that was both this Test’s first and third and one we are unlikely to ever see the likes of again.