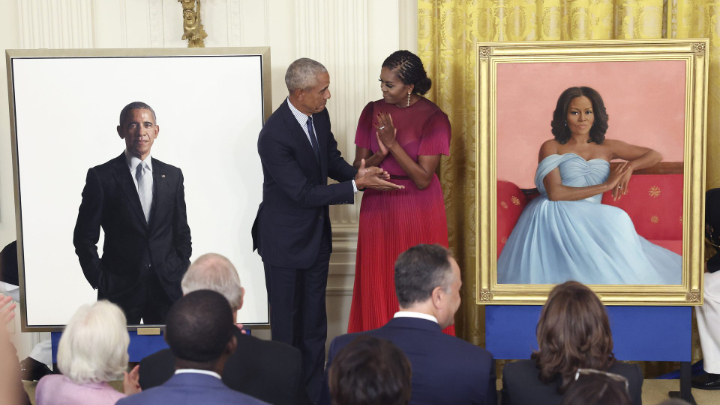 Former President Barack Obama and former first lady Michelle Obama’s official White House portraits were unveiled during an emotional ceremony at the White House on Wednesday – marking their first joint visit to the building since they left in 2017 and the return of a Washington tradition last celebrated 10 years ago.

The history-making portraits of the Obamas stand in contrast to those of other US presidents and their spouses hung on the White House walls, depicting the first Black President and first lady through the perspectives of contemporary artists working outside many of the conventions of traditional political portraiture.

McCurdy told the White House Historical Association in an interview that his process focused on working off of a photograph of the former President. The photorealistic image of the former President, dressed in a black suit with a gray tie, is painted against a minimal white backdrop – a signature of McCurdy’s artworks. McCurdy said his paintings take at least a year to complete.

The former first lady’s portrait was painted by Sprung, who describes her work as “contemporary realism.” The image depicts Michelle Obama in a blue dress, seated on a sofa in the Red Room of the White House. The artwork was painted from photographs taken in different locations on the White House’s State Floor.

The long-awaited return of a White House tradition

Wednesday’s ceremony in the East Room marked a rare occasion for a celebration among two presidential administrations, where President Joe Biden and first lady Jill Biden convened a who’s who of administration officials past and present – from the unique vantage point of having served in both.

The pieces, which will hang inside the White House for decades to come, are the first official portraits added to the White House Collection since then-President Obama held a bipartisan unveiling ceremony for George W. Bush and Laura Bush in 2012.

Biden used the unveiling ceremony to reflect on the Obamas’ accomplishments in the White House, saying that the former first couple “made history.”

“You both generated hope for millions of people who were left behind for so long – and it matters. You both did it with such grace and such class. You dreamed big and secured lasting wins for the American people, helping lift their burden with a blessing of hope,” he continued. “It’s so underestimated … just having hope. This is the gift of the Obama presidency to the country and to history.”

The former President subsequently led a standing ovation for Biden, saying in the East Room, “Thanks to your decency and thanks to your strength – maybe most of all thanks to your faith in democracy and the American people – the country’s better off than when you took office. And we should all be deeply grateful for that.”

Stewart McLaurin, the president of the WHHA, told CNN that the Covid-19 pandemic played a factor in the timing of the unveiling. The WHHA, a nonprofit organization, facilitates and funds the creation of the portraits.

“Covid impacted us two-and-a-half years ago, and I do think it’s important for these (portraits) to be revealed at a time when the public does have access to the White House and they can be seen,” McLaurin said.

While there’s no hard-and-fast rule for when a White House portrait ought to be unveiled, ceremonies have often been hosted by a former president’s immediate successor. And when in office, President Donald Trump never held a ceremony for the Obama portraits.

‘An evolution of art’

Details about the pieces being unveiled on Wednesday were a tightly held secret, with artists and art movers signing confidentiality agreements to keep things under wraps before the big day.

But the Obamas have often used art as a tool to express their tastes, so it should come as no surprise that their White House portraits are doing the same.

McCurdy’s depiction of the former President is minimalist, eschewing the conventional props typically associated with a presidential portrait, like a desk or a bookcase, for an entirely blank background.

The former President said during the unveiling that he liked that McCurdy “paints people the way they are, for better or worse.”

“He captures every wrinkle on your face, every crease in your shirt. You’ll note that he refused to hide any of my gray hairs, and refused my request to make my ears smaller. He also talked me out of wearing a tan suit, by the way,” Obama quipped. “His work is so precise that at first glance it looks like a photograph.”

While past presidents attain a form of “mythical status” after leaving office, Obama said he hoped future generations would look at the portraits and “get a better, honest sense of who Michelle and I were.”

“And I hope they leave with a better understanding that if we could make it here, maybe they can too. They can do remarkable things, too,” he continued.

Sprung’s interpretation shows the former first lady appearing to take a brief moment to get comfortable inside one of the most formal rooms in the White House. Unlike her predecessors’ portraits, Michelle Obama is wearing a strapless gown in her portrait – perhaps a marker of the country’s evolving style.

In her portrait, the former first lady is wearing a custom Jason Wu Collection gown, a person familiar with the details told CNN. Wu is a full-circle choice of designer for Obama, and he designed both of her inaugural gowns. Obama’s choice of Wu back then essentially launched his career as a globally recognized fashion designer.

Michelle Obama said during the ceremony that though she “never could have imagined” being the first lady would be part of her story, she recognized that “traditions like this matter, not just for those of us who hold these positions, but for everyone participating in and watching our democracy.”

“Too often in this country, people feel like they have to look a certain way or act a certain way to fit in, that they have to make a lot of money or come from a certain group or class or faith in order to matter. But what we’re looking at today – a portrait of a biracial kid with an unusual name and the daughter of a water pump operator and a stay-at-home mom – what we are seeing is a reminder that there is a place for everyone in this country,” the former first lady said.

“That is what this country is about. It’s not about blood or pedigree or wealth. It’s a place where everyone should have a fair shot,” she continued.

Ahead of Wednesday’s reveal, McLaurin called the Obama portraits “an evolution of art.”

“We’re now heading towards the first third of the 21st century. And I think in the mind’s eye of most Americans, we see presidential portraits as these very traditional, 19th-century-looking-and-feeling portraits. But art and taste in art evolves and changes,” he continued.

While living at 1600 Pennsylvania Avenue, the Obamas opted to highlight several contemporary and modern artists.

A Robert Rauschenberg painting replaced a portrait of a Roosevelt in the family dining room. Mark Rothko and Josef Albers works were installed. And Michelle Obama brought in work from Alma Thomas – the first Black female artist in the White House Collection.

Since leaving the presidency, the Obamas have staked some of their post-White House careers in taste-making – producing podcasts and award-winning films, as well as curating playlists and book lists each year.

For their portraits unveiled in 2018 at the Smithsonian’s National Portrait Gallery (which are not to be confused with new official White House portraits being unveiled this week), the Obamas chose two Black artists with unique perspectives on African-American portraiture.

Wednesday’s ceremony at the White House

The Obamas’ return to the White House marked a rare moment for the current and past administrations to converge and look back on a presidential legacy in the same room where President Obama awarded then-Vice President Biden a surprise Presidential Medal of Freedom in 2017.

Unlike the 2012 Bush portraits unveiling, Wednesday’s event mostly hosted attendees from the same political party – with some attendees having connections to both administrations.

The Obamas were joined by family, friends, former Cabinet members, and top staffers from the administration during the unveiling, acknowledging former staff in the room as well as staff from the White House residence.

Marian Robinson, the mother of Michelle Obama who lived in the White House residence during their presidency, attended the ceremony.

Shortly after Wednesday’s ceremony, the portraits were hung inside the White House.

Barack Obama’s portrait is now hanging in the Grand Foyer at the base of the main White House staircase, replacing the portrait of former President Bill Clinton. Michelle Obama’s is hanging one floor below, along the ground floor hallway.

The Bidens also hosted the Obamas and Robinson for a private lunch at the White House ahead of the East Room event. The conversation was more focused on nostalgia, an official said, rather than a strategy session on midterm elections or pending policies.

Former President Obama has visited the White House since Biden took office, but Wednesday’s event marked Michelle Obama’s first time back in the building since the Trumps arrived in January 2017.

While former President Obama and President Biden like to play up their relationship in public, there are limits to their friendship, officials have said.

They speak occasionally, but they are not in daily or weekly contact, people familiar with the matter have said.

After two terms working in Obama’s shadow, Biden has, at moments, differentiated himself from his predecessor. Officials have said there is also a degree of competition between the two men.

Their history, while one of partnership, has also been colored by various slights, real or perceived, that still linger.

Obama declined to endorse Biden over other Democrats in the 2020 primary, a step both men insisted was necessary to allow a true contest within the party. Four years earlier, Obama had viewed Hillary Clinton as his Democratic successor instead of Biden, who decided not to run as he grappled with his son’s death.

Trump portraits are up next

The White House Historical Association is in the “beginning stages” of the portrait processes for former President Trump and former first lady Melania Trump, McLaurin said.

“There’s focus on specific artists that will likely be doing their portraits,” McLaurin added.

A source familiar with the situation told CNN that chatter about the portraits started in the last six months at Mar-a-Lago – Trump’s Florida residence – and that the former president recently sat for photographs. However, it’s not clear whether Trump has posed for the White House portrait artist or for photographs specifically for the portraits.

On Tuesday, White House press secretary Karine Jean-Pierre declined to say whether Biden would extend an invitation to Trump should his portrait be completed during the Biden administration.

While the official White House portraits are typically funded by the WHHA, the other set of portraits being created for the Smithsonian National Portrait Gallery are being underwritten by Trump’s political donors.

Trump’s political action committee donated $650,000 to the Smithsonian Institution in July to help underwrite the portraits of the Trumps, according to Linda St. Thomas, chief spokesperson for the Smithsonian.

The donation from Trump’s Save America leadership PAC marks the first time that funds have come from a political action committee since the institution began raising private funds for presidential portraits – a practice that started with the portraits associated with former President George H. W. Bush, St. Thomas said.

St. Thomas said another private donation of $100,000 also is helping to pay costs associated with the portraits. The funds, totaling $750,000, will go to artists’ fees, shipping, framing, installation, and events.

Jubo League attendees swarm the Ctg rally for the PM