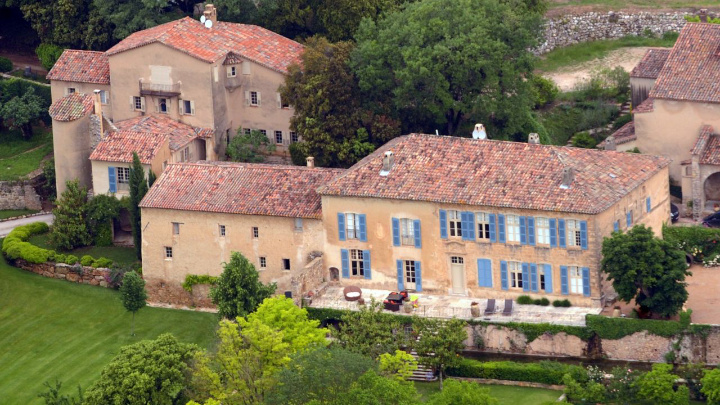 An aerial view of Chateau Miraval, a vineyard estate currently at the center of a legal battle between Brad Pitt and Angelina Jolie.

Angelina Jolie and Brad Pitt’s battle over their winery continues.

In February, Pitt sued Jolie over what his claim called the “unlawful” sale of her stake in Château Miraval, a country estate and winery in the south of France acquired by the couple in 2008.

In a countersuit filed this week, obtained by CNN, Jolie accused her ex-husband Brad Pitt of “waging a vindictive war against her” and “hijacking” control of the lucrative winery business they once shared.

Pitt and Jolie were married on the property in 2014 and would, according to Pitt’s suit, spend the holidays there as a family.

Jolie filed for divorce from Pitt in September 2016 following a heated encounter aboard a private jet investigated by the FBI.

After she did so, Jolie’s suit, filed on behalf of her former company Nouvel LLC, alleges, Pitt “and his allies” took “illegal and malicious actions” with the intention to “injure” Jolie and Nouvel, “by devaluing its investments and depriving it of its proper role in the management of Chateau Miraval, the world-famous producer of rosé wine.”

Jolie is seeking at least $250 million in compensatory damages.

CNN has reached out to representatives for Pitt and Jolie for comment.

The countersuit states Pitt “masterminded a so-far-successful plan to seize control of Chateau Miraval” and mishandled trademark registrations that had “devastating financial consequences” for Nouvel.

“Pitt has frozen Nouvel out of Chateau Miraval and treats it as his personal fiefdom,” the suit says.

It also says Pitt, “embarked on a multi-faceted, years-long campaign to seize control of Chateau Miraval and appropriate the company’s assets for his benefit and that of his own companies and friends.”

In his claim, Pitt had alleged that Jolie “did nothing to drive (the) growth” of the business, which he turned into a “multimillion dollar international success story.”

Jolie’s countersuit disputes this, saying “Pitt refused to grant Jolie or Nouvel equal access to Chateau Miraval’s records or an equal voice over management,” effectively “holding the most significant part of her net worth hostage.”

Jolie stepped away from the business in October 2021, selling Nouvel and its stake in Miraval, to Tenute del Mondo, a subsidiary of Stoli Group, controlled by Russian oligarch Yuri Shefler.

Pitt’s lawsuit alleges the sale was unlawful because he and Jolie had agreed when they purchased Château Miraval that neither would sell without the other’s consent. But Jolie’s countersuit alleges she made the sale after negotiations between Jolie and Pitt that would have sold Nouvel to Pitt fell apart over “a provision designed to prohibit Jolie from publicly speaking about the events that had led to the breakdown of their marriage.”

“Pitt knew that much of Jolie’s wealth and liquidity were tied up in Nouvel and used that fact to try to force Jolie to agree to his unreasonable terms,” her countersuit says.

Pitt’s suit did not specify an amount sought for damages but included a request for “relief that the Court deems just and proper.”

A dissolution of Pitt and Jolie’s marriage was granted in 2019, but their legal battle over property and custody of their minor children has continued.

A California appeals court ruled last year that a retired judge who had been hired by both parties to arbitrate the custody dispute should be disqualified because of undisclosed ties to Pitt’s attorneys.

In 2020, Jolie told Vogue India she split with Pitt for the sake of her children.

Pitt told GQ in 2017 he had quit drinking after having been “boozing” too much that past year.

In a June 2022 interview with British GQ, he talked about finding peace recently.

“I always felt very alone in my life,” he told the publication, “alone growing up as a kid, alone even out here, and it’s really not till recently that I have had a greater embrace of my friends and family.”